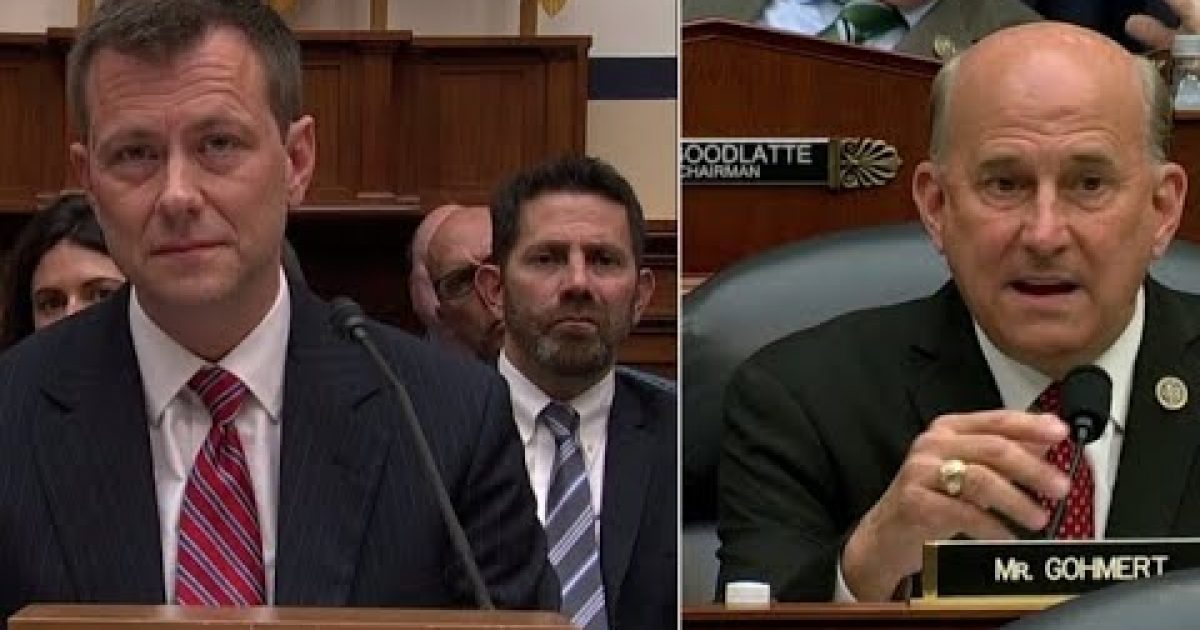 Well, I have to hand it to Rep. Louie Gohmert (R-TX) in his handling of FBI agent Peter Strzok about how many times he looked directly into his wife’s eyes and lied to her about his adultery with former FBI attorney Lisa Page while in the midst of a joint hearing before the House Judiciary and Oversight Committees on Thursday.

“I’ve talked to FBI agents around the country,” said Gohmert. “You’ve embarrassed them, you’ve embarrassed yourself. I can’t help but wonder when I see you looking there with a little smirk; how many times did you look so innocent into your wife’s eyes and lie to her about Lisa Page?”

It’s great to see someone actually say what everyone is thinking about this man.

Take a look for yourself if you missed it.

"This is intolerable harassment of a witness!"

In a chaotic moment at House Judiciary hearing, Rep. Louie Gohmert asks FBI Agent Peter Strzok how many times he lied to his wife. The question drew cries of outrage from Democratic members. https://t.co/M3YsVmNmn5 pic.twitter.com/f0nEkO5ewO

Of course, the Socialist Democrats were offended that Gohmert would say such a thing, but it’s common knowledge that Strzok and Page were committing adultery, and since he was clearly lying to his wife about it, it’s understandable that Gohmert could assume he would sit before the people’s representatives, look them in the eye and lie to them, and this is just unacceptable to the liars on the committee.

Just listen to them. They claim it was “outrageous” and “intolerable harassment of a witness” and that Gohmert was off his meds and needed to take them.

I don’t see it that way at all. I see it as clearly presenting evidence that the man before them is a known liar, in the most private of relationships, with his wife. He was engaged in an adulterous affair with another woman and they both appear to have been colluding against then-candidate Donald Trump in an attempt to set him up for a political fall.

What is out of order here is the reaction of Democrats who are attempting to keep Gohmert from exposing their own adulteries and crimes. They simply do not want to hear about it.

Gohmert was not in violation of any committee rules and yet, no one stopped Democrats from being out of order during his time of questioning.

Strzok failed to answer any questions with any substance, but at least he did appear. The Wall Street Journal’s Kimberly Strassel tweeted about the testimony.

Sounds like the person who should be in that witness chair is Christopher Wray, to answer why the FBI has told Strzok to obstruct Congressional inquiries.

Did Strzok use the "ongoing investigation" excuse when he gave private testimony? Presumably not. So why is it now valid to avoid questions?

Anyone think Democrats look a little desperate to make sure Peter Strzok doesn't have to answer any questions? Wonder what they fear.

Strzok takes "great offense" that anyone might think that what he wrote was what he meant–that his bias against Trump was bias. Can't make this stuff up.

Huh. A congressman is actually asking questions, and a witness is actually answering–with no interruptions. Oh wait, that's right. It is a Democrat doing the asking, and Republicans showing respect for his time. #strzoktestimony

On the question of Strzok's bias and whether we should believe he didn't act on it. The question every American should ask is this: How would you feel if he'd expressed such disgust toward you, and was also investigating you?

Wow. It is something to watch Peter Strzok lecture Congressional overseers on when is an "appropriate" time for them to ask questions.

To be clear, it is "at the direction of the FBI" that Strzok will not answer any consequential questions. In other words, this is the FBI again stonewalling Congress.

Lisa Page ignored a subpoena to testify before Congress this week.