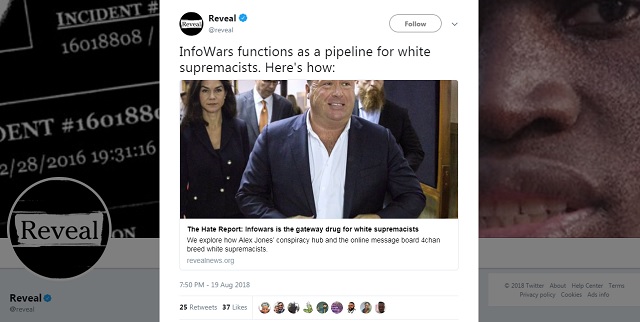 As Google is banning Alex Jones and Infowars from their platforms, they’re simultaneously funding a news organization which is justifying their censorship by demonizing Jones as a “gateway” to white supremacy.

“The Center for Investigative Reporting” has a list of their backers on their website. The list includes George Soros’s Open Society Foundations, the Bill & Melinda Gates Foundation, the Ford Foundation and Google News Lab. On Friday, as part of what they called, “The Hate Report” — a recurring column which focuses entirely on right-wing hate and glamorizes antifa while ignoring left-wing hate and violence — they published an article attacking Jones and Infowars as “the gateway drug for white supremacists.”

From The Center for Investigative Reporting, “The Hate Report: Infowars is the gateway drug for white supremacists,” by Aaron Sankin and Will Carless:

Andrew Anglin’s website, The Daily Stormer, is one of the most powerful forces in the online hate ecosystem. But Anglin wasn’t always a neo-Nazi. He used to be hippie vegan who would wear a hoodie with a “Fuck racism” patch on the back.

In a 2015 interview on the white supremacist radio show “Stormfront,” Anglin laid out his own radicalization process. It all started at an unexpected gateway: Alex Jones’ conspiracy hub, Infowars.

“I grew up with a pretty serious sense of personal alienation in the modern Jewified society,” Anglin told “Stormfront” host Don Black. “I went and looked for answers of why this was happening. Nothing really felt right about the way the world worked. It was a process. The first thing I came across was Alex Jones.”

The entire article is just more guilt by association smears. What makes it noteworthy is this is a Google-funded fake news organization which is justifying Google’s massive censorship and election interference by smearing Jones as a white supremacist “gateway.”

The notion anyone who was ever influenced by anyone else is responsible for their behavior is patently insane, nonetheless the same argument could be used by Google and Big Tech to shut down every alternative and anti-establishment news site and YouTube channel in existence.

No doubt, this “gateway” excuse will be used to deplatform us all unless the Trump administration continues to move hard against Big Tech to protect the rights of the true free press, which Google-funded fake news outlets like “The Center for Investigative Reporting” are colluding together to shut down.