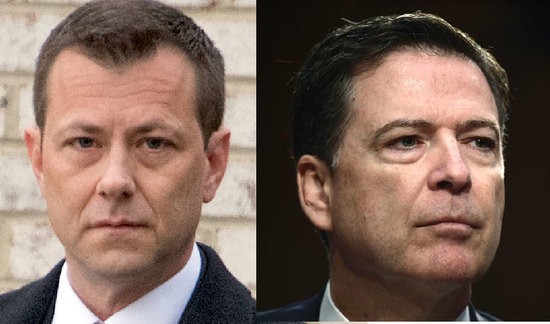 Massie took to Twitter to make the recommendation following recent developments involving Butina, a gun-rights activist who infiltrated the NRA and is currently serving an 18-month prison sentence for conspiring to act as an unregistered foreign agent.

The tweet also comes amid statements made by former Overstock.com CEO Patrick Byrne, who claims he was instructed by Strzok to have a relationship with Butina on behalf of a government espionage operation. (Related: Russian operative CASHED IN with US spy agencies; $100K payday after promises to deliver cyberweapons and TRUMP DIRT)

Byrne said Friday that both Comey and Strzok were aware of, and directed, the operation.

“The feds should let Maria Butina out of jail and put James Comey and Peter Strzok in her cell,” Massie tweeted.

The feds should let Maria Butina out of jail and put James Comey and Peter Strzok in her cell.

If you watch anything today, watch this video:https://t.co/wvYaCOwAFl

Butina, 30, was charged by prosecutors of infiltrating conservative groups including the National Rifle Associate to covertly advance Russian interests in the U.S. She pleaded guilty to a lesser charge of conspiracy and is scheduled to be released from prison later this year, The Washington Times reported.

According to NewsTarget, Byrne stepped down from his post after he stunned investors with a frank admission earlier this month that he was a government informant involved with the Deep State.

Last week, as NewsTarget also reported, Byrne said during an interview with the Fox Business Network that he had a role in the “Trump-Russia collusion” hoax — a.k.a. “Spygate” — perpetrated by the Obama administration.

The news site reported that Byrne was involved at one point with Russian spy Maria Butina, a gun rights activist who recently pleaded guilty to conspiracy in exchange for assisting the Justice Department with ongoing investigations. She has also been romantically linked to GOP operative Paul Erikson, who’s also been notified he’s the target of a federal investigation himself, the Washington Examiner reported.

But the really shocking news came when Byrne told FBN host David Atman that Attorney General William Barr was set to drop the hammer on others involved in Spygate, which was really an operation to depose POTUS Donald Trump after he unexpectedly beat Hillary Clinton, very soon.

“I ended up in the center of the Russian and the Clinton investigations. I have all the answers. I have been sitting on them waiting for America to get there. Last summer I figured out… what they all are is all about political espionage,” he told Asman.

“It had nothing to do with law enforcement, it was all political espionage. Here’s the bottom line. There is a Deep State like a submarine working just beneath the waves of the periscope depth watching our shipping lane. And a nuclear ice breaker called the USS Bill Barr has snuck up on them and is about to ram midship,” he continued.

“That’s about to happen and I think we’re about to see the biggest scandal in American history as a result. But it was all political. Everything you think you know about Russia and Clinton investigations is a lie. It’s all a cover-up. It was all political espionage,” Byrne said.

When Asman asked if Barr was going to “get to the bottom” of Spygate, Byrne asserted that Barr already has.