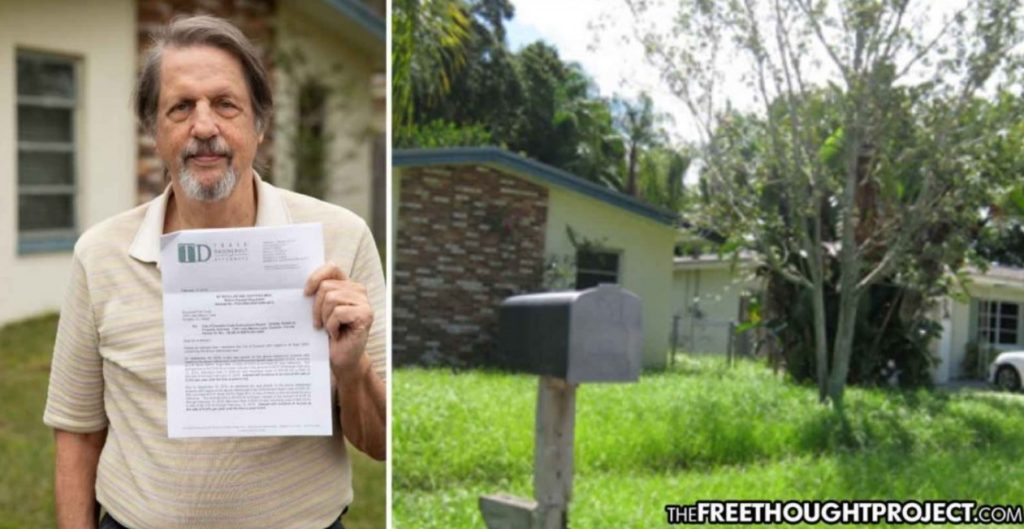 A quick message before your selected article… Times are Tough, Censorship is Unreal and we need the truth to survive. Follow my websites on GAB and Truth Social and share, share, share. God Bless You ALL, Dean Garrison (publisher of DC Clothesline and DC Dirty Laundry)

Dunedin, FL — Jim Ficken is not a criminal, has never been in jail, and is a model citizen in the town of Dunedin, Florida. However, the government dealt a massive blow to property rights by fining him $30,000 and threat of foreclosure — because his grass grew too tall while he looked after his mother’s estate.

The entire police state overreach began for Ficken in 2018 when he was out of town trying to take care of his late mother’s estate and his grass did what grass does, it grew. Knowing that it is unpleasing to neighbors to grow long grass, Ficken hired a friend to cut it for him while he was away, but that friend died and Ficken had no idea.

“The grass did what grass does… and a code inspector saw it was more than the 10 inches the city allows and Jim was on the hook,” said Andrew Ward, one of Ficken’s attorneys from the Institute for Justice.

This month, a judge with the 11th Circuit Federal Court ruled against Ficken and demanded that Ficken pay $30,000 in fines for his tall grass. These exorbitant fines could cost Ficken his home.

“If a $30,000 fine for not mowing your lawn isn’t excessive, what is?” Ward said after the ruling. “A city or state cannot pass an unconstitutional law, and argue that because it is the law, it’s constitutional.”

Unfortunately for Ficken, the court disagrees and stated that Florida statutes allow the fines for repeated violations of local ordinances and municipal code.

Because Ficken’s grass was over 10 inches, the city government claimed Jim owed them money. Every day that Ficken kept his grass over the “legal limit,” the government would steal $500 from him. This went on for 57 days, and now, the government claims Ficken owes them nearly $30,000.

“I was out of town when code enforcement officials first noticed my grass was too tall,” Ficken said. “They came back almost every day to record the violation, but never notified me that I was on the hook for fines. By the time I found out, I owed them tens of thousands of dollars. Then, they refused to reduce the fines and voted to authorize the foreclosure of my home. I am disappointed that the court sided with Dunedin, but what happened to me is wrong, and I will continue to fight.”

“The city’s behavior toward Jim is outrageous,” said IJ Attorney Ari Bargil. “This ruling emboldens code enforcement departments across the state to impose crippling financial penalties and it empowers them to do so without first notifying a property owner that they are potentially going to be fined.”

Ficken, who is retired and on a fixed income, cannot pay this insane amount of money. Being unable to pay immoral fines imposed on one’s private property by goons in the local government is of no concern to said goons and they intend on getting their money—by any means necessary. So, they are going to take his home.

Ficken and the folks at the Institute for Justice plan on fighting this case all the way to the Supreme Court if they have to.

“I’m astounded the court agreed the city could fine me $500 per day, without my knowledge, and then try to take my house — all to settle a bill for tall grass,” said Ficken, in a statement included with a media release issued by the Institute for Justice. “The court’s ruling is outrageous. If this can happen to me it can happen to anyone. That just can’t be right, and I’m looking forward to continuing my fight.”

While these excessive fines and theft of property may seem over the top, force, extortion, and theft is how the government maintains its power. As Ficken is learning, anyone who stands in the way of that power pays a heavy price.

Indeed, as TFTP has previously reported, the government has gone so far as to issue arrest warrants for elderly women for tall grass. Seventy-five-year-old Gerry Suttle was stunned when she received a call from the local police chief, informing her that she had a warrant issued for her arrest for tall grass.

In an extreme case in Austin, Texas last October, a man was killed over his tall grass. Austin police attempted to serve a warrant to man whose grass was too long and it resulted in a standoff, shots fired, a house fire, and that man’s death.

Insanely enough, that was the second story last year in which a Texas resident engaged in a standoff with a SWAT team over their tall grass.

In July of 2021, a man in Fort Worth, Texas decided that he wasn’t having it anymore either. When police were dispatched to his home over grass that was too long to meet the city’s arbitrary requirements, the homeowner had a message for them — in the form of bullets.