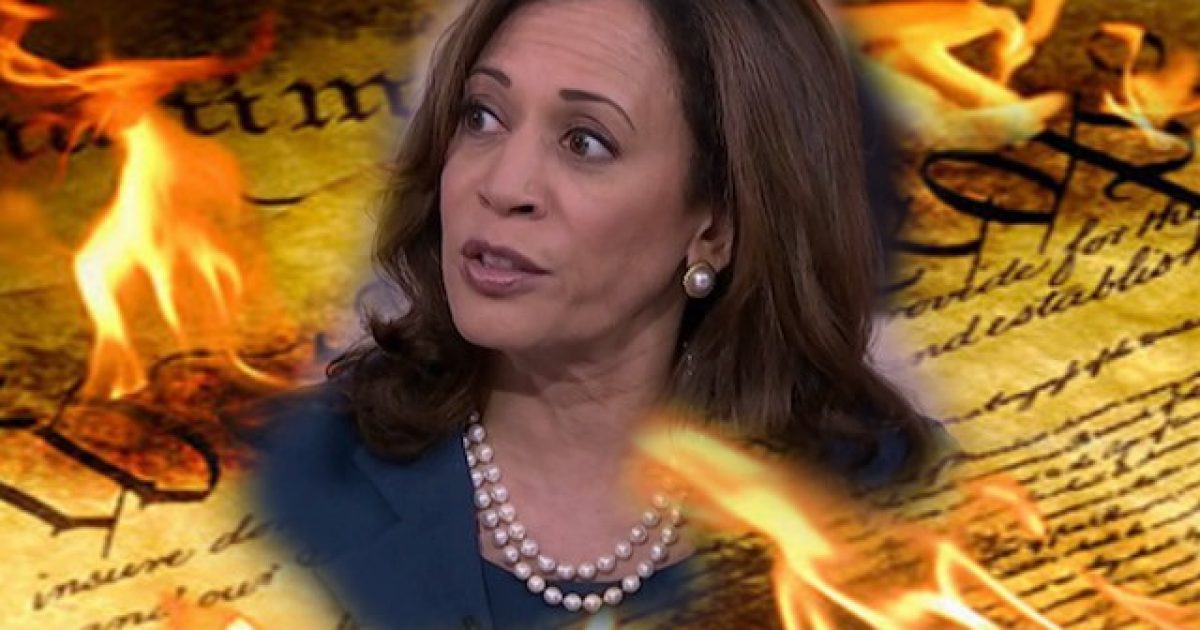 Gun grabbing 2020 presidential candidate Senator Kamala Harris (D-CA) had said she will usurp her constitutional authority if elected as president in order to advance her Communist agenda if Congress will not usurp the Constitution further to enact unconstitutional gun confiscation legislation.

Harris said during a CNN townhall meeting when she was asked about school shootings, “Upon being elected, I will give the United States Congress 100 days to get their act together and have the courage to pass reasonable gun safety laws. And if they fail to do it, then I will take executive action.”

Harris said “conversations take place every night between students and their parents” about why school shootings keep happening. This is a blatant lie. These conversations do not happen every night. She is simply blathering to pander to the stupid people.

She proclaimed that children would tell their parents they had a bad day because they were put through drills, which is a lie because we all know children love drills and anything that gets them out of class.

Furthermore, what she doesn’t tell you is that in order to maintain the status quo, Harris would encourage more drills because she doesn’t support what would actually work and that is the elimination of gun free zones and to stop infringing on the rights of gun-owning teachers, principals and school staff.

She claims politicians have failed “to reject a false choice which suggests you’re either in favor of the Second Amendment or you want to take everyone’s guns away.”

Well, that is the case Ms. Harris.

The Second Amendment is clear. What part of “the right of the people to keep and bear arms shall not be infringed” does this woman and those Communists like her not understand?

While Harris claims to be a gun owner and willing to usurp the powers granted to her should she become president and encourage Congress to usurp powers not granted to them under our Constitution, she continues to have armed security detail as well.

She claims that she will issue a background check requirement for “anyone who sells more than five guns a year.”

Did you just pull that number out of thin air Ms. Harris? What a subjective tyrant you would be.

She went further in stating what she would have the unconstitutional alphabet agency Bureau of Alcohol Tobacco and Firearms take gun dealers licenses if they break the law.

The problem is that the ATF should not be in existence in the first place. Manufacturing and selling arms to law-abiding citizens is constitutional, period.

I’ll add that the ATF is criminal in the same manner that those in the Obama administration were during Operation Fast and Furious. However, will we hear Harris call for those in the ATF, Erich Holder and the usurper Barack Hussein Obama Soetoro Sobarkah be arrested and dealt justice in the illegal gun running scheme that cost two federal agents their lives and over a thousand Mexicans their’s?

No way! This woman is such a hypocrite.

“I will require that for any gun dealer that breaks the law, the ATF take their license,” she said.

Harris also said, “none of us has been sleeping over the past two years” since the Trump administration “took fugitives off the list” of people prohibited from buying firearms.

“I’d put them back on the list, meaning that fugitives from justice should not be able to purchase a handgun or any kind of weapon,” she added.

I’m pretty sure Harris has gotten more sleep than this writer. Not one person has lost sleep over what she is claiming.

I’ll remind everyone that Harris failed to do her duty when confronted with actual, irrefutable evidence of Planned Parenthood baby murderers illegally trafficking the parts of those murdered babies. Instead, she chose to go after the very people that exposed the crimes.

This is a woman that doesn’t even want talks around the tables between parents and their children because she supports murdering them before they can be born.

Harris is a criminal.

She shouldn’t even be in the senator’s seat, much less running for the White House or sitting in the Oval Office.

Frankly, I don’t think the woman has a chance, but her ideas are all held by her colleagues, including the criminal Joe Biden.