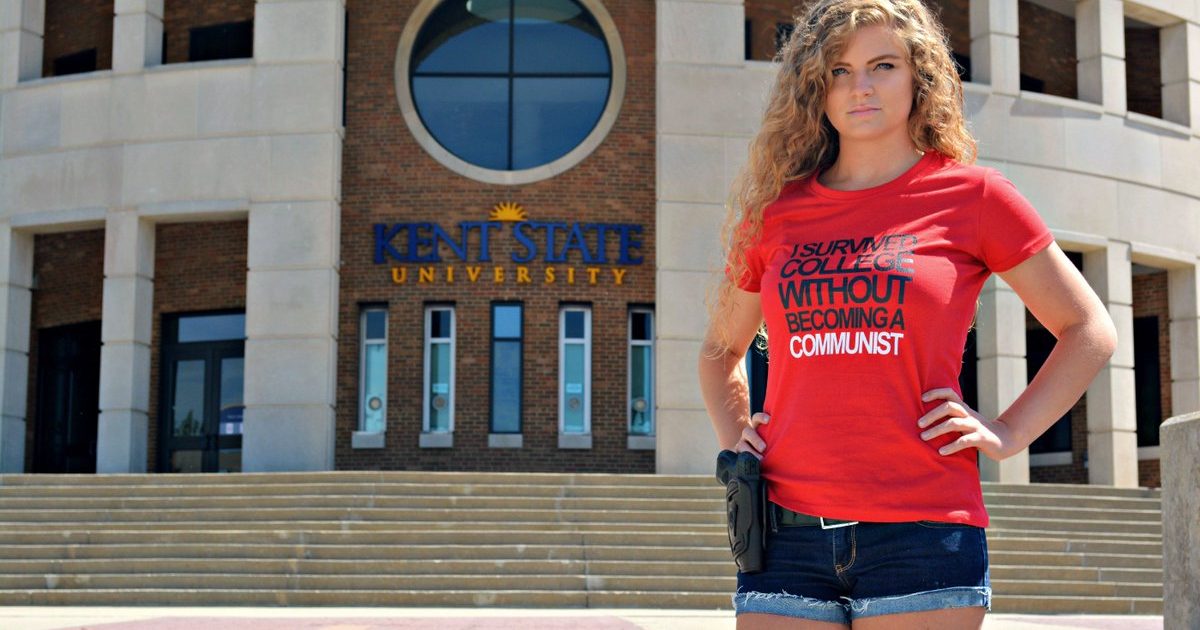 Remember Kaitlin Bennett from Kent State? She’s the girl who graduated earlier this year and posed with an AR-10 to make a point about the school’s anti-gun policy. Well, the school, and I’m sure many Communist gun grabbers would have liked for Kaitlin to disappear silently into the night after graduation. They are not going to be seeing that though, as she has won her first round in a suit against the university over its gun policies that allow a non-student to open carry but not students.

Here’s how she caught national attention earlier this year.

Now that I graduated from @KentState, I can finally arm myself on campus. I should have been able to do so as a student- especially since 4 unarmed students were shot and killed by the government on this campus. #CampusCarryNow pic.twitter.com/a91fQH44cq

I have no apologies for my graduation photos. As a woman, I refuse to be a victim & the second amendment ensures that I don't have to be. pic.twitter.com/5CKmQobrMb

Following graduation, Bennett took a position at a local gun shop and continued her activism, even targeting David Hogg with an arm wrestling challenge which he was not equipped for nor responded to it.

She also was informed by the FBI that people had been reporting threats against her to them.

Bob Alderman at The New American reports on an update:

She and the group she founded and ran while on campus, Liberty Hangout, held an “open carry gun walk” on campus in September. So outraged were anti-gun groups that hundreds showed up in protest, forcing the university to hire between 300 and 400 SWAT officers, sheriff’s deputies, state troopers, and police from across the state to keep the peace. Hundreds of protestors showed up and four were arrested. It cost the university an estimated $65,000.

When Michael Heil, the student who took over Liberty Hangout after Bennett’s graduation, applied for permission to hold a meeting in the KSU student center to hear Bennett speak in November, the university approved on condition that his group come up with $1,800 to pay for security. Heil obtained the legal assistance of Freedom X law group out of Los Angeles, which filed suit against the university. Heil claimed that not only was the fee unfair, it rewarded protesters likely to show up with protection from their own illegal behaviors. As William Becker, the Freedom X lawyer, explained:

By assessing such security fees against the Plaintiffs, Defendants … are responsible for ratifying an unconstitutional heckler’s veto, taxing protected speech and rewarding those who disrespect the solemn and precious freedoms safeguarded by the First and Fourteenth Amendments.

Such a fee assessment against the student sponsors of the event effectively curtails their ability to hold it due to the high cost of security and amounts to a form of censorship and punishment.

Furthermore, wrote Becker, the fees were discriminatory and arbitrary:

KSU determines the amount of security fees it assesses against a group based upon the reaction to controversial speakers by hostile agitators.

KSU makes no pretense that its security policy at any location on campus shifts the financial burden for security to [Liberty Hangout].

On Tuesday a federal judge stopped Kent State from charging Heil and his group the security fee and the meeting went ahead, with Kaitlin Bennett as the speaker, on Monday night.

The judge, John Adams, said he was “gravely concerned” that the school’s policy might infringe on Bennett’s and the group’s First Amendment rights by using Bennett’s past history of pro-gun activism to determine whether or not she would be allowed to speak. Adams added, “We can’t allow protestors to shift the [financial] burden to the speaker and her organization.”

He issued the temporary order until a full hearing on the matter takes place in early December.

I’m actually glad to see a young person take a stand and not back down, even when they can just walk away. The fact that it’s a female carries even more weight against the men who have failed to take a stand on campus. Hopefully, this case will result in a huge change in school policy that leaves its students to be victims for the next mass shooter, or God forbid, the next time the government brings guns on campus.