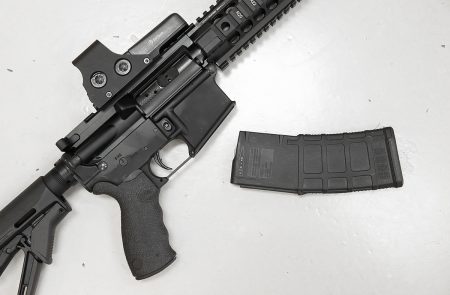 (Natural News) In the aftermath of a recent federal court ruling striking down as unconstitutional a California law limiting gun magazines to 10 rounds, firearms owners throughout the state have flooded suppliers with purchases.

Following the ruling, many online gun suppliers began selling magazines of all sizes to gun owners in California. One of them, Rainier Arms, has seen purchases of its Magpul Gen2 30-round AR-15-style magazines soar to the point that the sales/payment processing server went down for a time, Ammoland reported.

“We received such an overwhelming surge of sales over the weekend, it actually crashed our merchant services, the website was fine, but our payment services were so overwhelmed it crashed,” said Aristotle Bartolome of Rainier Arms, the gun news site reported.

“With that said, we closed out a very strong weekend, and even with the chaos, we’re currently 48 hours behind on getting all of the weekend orders caught up and adjusting staffing to better support our customers getting their orders quicker.”

Another retailer, Brownells, also reports they are selling magazines like crazy to California buyers. More to the point, the company says that buyers in the Golden State appear to be “stocking up” on AR-15 magazines especially (Brownells is one of the biggest firearms and gun suppliers online).

California residents are in a rush to buy up magazines before the state can appeal U.S. District Judge Roger Benitez’s decision to the Ninth Circuit Court. The judge’s decision stunned the California Attorney General and the gun community as well. It went further than either side anticipated.

One California resident, Adelaide Golden, told me that she thinks that all gun owners in the state need to take advantage of the opportunity to purchase standard capacity magazines while they are shipping to the state.

How many rounds are ‘too many’?

“In a national and local environment that is increasingly hostile to responsible gun owners, it’s important to take advantage of opportunities that present,” Golden said. “With the overturn of unconstitutional limits on magazine sizes, I, as a California resident, can finally have standard size magazines that can make a small difference at the range and a huge difference if I’m ever forced to defend myself or my home.”

And that’s a great point, by the way — the ability to defend oneself and their home.

First of all, as The National Sentinel noted recently, the Second Amendment is clear in that the gun rights “shall not be infringed.” Limiting the amount of bullets a person can place into a bullet feeding device is an infringement, period, therefore unconstitutional in its face (so the federal court ruling is correct).

Secondly, who decided that 10 rounds were “enough?” Why 10? Why not 11? Or six? Or nine? Or 12? That’s like liberals trying to implement a “minimum wage;” what criteria is used? Is there data behind the 10-round number? How many studies have been done to determine the ‘correct,’ ‘necessary,’ and ‘safe’ number of bullets guns should have?

Also, as Breitbart News reports, Democrats’ bullet limitations don’t have any effect whatsoever on gun homicides, according to a new study. The research, titled, “The Impact of State Firearm Laws on Homicide and Suicide Deaths in the USA, 1991–2016: a Panel Study,” found specifically that magazine bans and bans on “assault weapons” do not reduce firearms-related deaths.

California’s ruling Democrats will no doubt appeal the federal court’s ruling because Democrats cannot stand to see any of us armed and independent. But clearly, even if the ban is reinstated, scores of California gun owners are stocking up on a valuable firearms commodity just in case they are ever needed to defend other rights.

See more news about the growing resistance to globalist government tyranny at Resist.news.