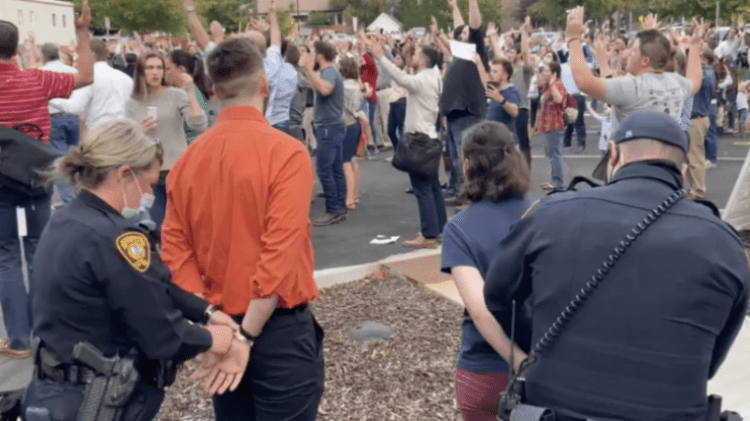 Each of the criminal cops that executed the unconstitutional order to arrest Christians who were singing hymns in the parking lot of city hall in Moscow, Idaho should be arrested themselves, charged and removed from any capacity of public service. Yet, does anyone think that’s going to happen? Nope, not a chance unless Christians start taking a stand against the tyranny and bringing the law to bear against tyrants and their agents of the state.

The Church is pastored by author Douglas Wilson

The five individuals were cited for being in violation of Moscow’s mask/social distancing order, Moscow Police Chief James Fry told the Daily News.

As many as 200 people turned out for the “Flash Psalm Sing” sponsored by Moscow’s Christ Church.

“Well, it happened,” one observer wrote on Twitter. “The Moscow (Idaho) Police Department arrested my kids’ music teacher and his wife the basketball coach for singing without social distancing at a Psalm Sing protest. The music is beautiful.”

Two people were handcuffed as hundreds sang “Praise God From Whom All Blessings Flow.”

“Why are the citizens not putting a stop to this? They work for the public hold them accountable. Up to and including armed resistance,” one observer asked on social media.

Every police officer and every elected leader involved in this depraved attack on the U.S. Constitution should be removed from office. And the Justice Department should launch a civil rights investigation.

Sadly, the Trump DOJ has been all bark and no bite on this issue up to this point. While Trump may contact Pastor John MacArthur to thank him for his stand, he’s done absolutely nothing to make sure the laws are faithfully executed (Article 2, Section 3 of the US Constitution) regarding the infringements of the rights of Christians under the guise of the COVID hoax that he and his administration perpetrated on the American people for months, day after day through the likes of daily press conferences with Dr. Fauci and Dr. Birx. And they still cannot prove it even exists!

This kind of behavior by civil authorities is unconstitutional, a clear violation of the First Amendment’s protections, and makes them into common criminals against the people.

This kind of behavior by civil authorities is unconstitutional, a clear violation of the First Amendment’s protections, and makes them into common criminals against the people.

What I want to know is why did the Christians not intervene in the matter and shame the cops making the arrests.

Watch the interview below that includes Latah County Commission candidate Gabriel Rench, one of the men arrested.

Tim Brown is an author and Editor at FreedomOutpost.com, SonsOfLibertyMedia.com, GunsInTheNews.com and TheWashingtonStandard.com. He is husband to his “more precious than rubies” wife, father of 10 “mighty arrows”, jack of all trades, Christian and lover of liberty. He resides in the U.S. occupied Great State of South Carolina. . Follow Tim on Twitter. Also check him out on Gab, Minds, MeWe, Spreely, Mumbl It and Steemit
(Visited 14 times, 1 visits today)
Share
Tweet
Share
Pin