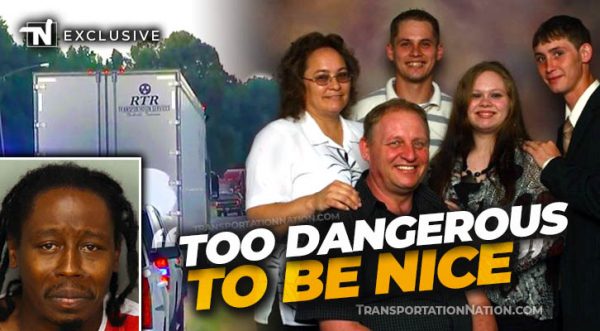 During the Summer of George Floyd rage, we’ve seen multiple anti-white attacks by b lacks across the USA. There has been virtually zero national media coverage of this events.

Enter another story of anti-white violence from a black individual into the mix. Her name is Christine Summers. The 53-year-old was a wife, a mother, a grandmother, and worked in the vocation of truck driving to provide for her family. She was murdered by a black male, who also attacked white cops and displayed vicious anti-white animus according to the police. Her murderer said he “killed a white lady,” and President Trump made him do it. [Birmingham trucker murder suspect: Trump made me ‘kill a white lady’, AL.com, October 21, 2020]:

A naked and bloody suspect in the beating death of a female trucker on a Birmingham street told officers who arrested him that he had “killed a white lady” and President Trump made him do it, according to testimony Wednesday in a Jefferson County courtroom.

Charles Levester Gipson, 39 is charged with murder in the Aug. 19 killing of 53-year-old Christine Summers. Summers was driving a truck for RTR Transportation in Tennessee. She was a wife, mother, grandmother and had been driving a truck for about 30 years.

Summers was found dead about 3:20 a.m. that Wednesday on the side of Interstate 59/20 near the Valley Road exit. Her dentures had been knocked out of her mouth, and she suffered a fatal head injury. Gipson was taken into custody just over an hour later after callers reported seeing a naked man on Allison Bonnett Memorial Drive.

A preliminary hearing in the case against Gipson was held today before Bessemer Cutoff Circuit Judge David Carpenter. Gipson, however, was not in the courtroom. Carpenter informed the court that the defendant, who also is charged with attacking two police officers and flooding his jail cell, had just recently assaulted a jailer and was too “unstable” and “dangerous” – both to himself and others – to have present in court.

The case is being prosecuted by assistant district attorneys Brent Butler and Jerry Carter. Attorney Victor Revill is representing Gipson. Summer’s disabled husband was watching the proceedings via Zoom from his Tennessee home.

State Bureau of Investigation Agent Vincent Cunningham testified to the chain of events that happened that day. He said he arrived at the I-59/20 scene about 6:15 a.m. to find Summers on her back and covered up near her tractor-trailer with multiple other law enforcement agencies on site, including the Jefferson Count Sheriff’s Office, Alabama State Troopers and Hueytown police. Scrawled in the dirt on the back of the tractor-trailer, Cunningham said, was “Trump 2020.”

The investigation showed that Summers had called 911, telling a dispatcher she had seen a Black male walking on the interstate and thought she may have hit him. While still on the phone with the dispatcher, Summers got out of the truck to investigate. The dispatcher then heard her began to scream, “Get away from me.”

“She never came back to the phone,” Cunningham testified.

Gipson was taken into custody about 4:30 a.m. by Hueytown police after they had received calls of an unclothed Black male in the roadway. Cunningham testified that arresting officers reported that Gipson was sweating profusely and made “spontaneous” statements about “killing a white woman” and that President Trump had made him do it. Gipson’s right fist was bruised, cut and bleeding and the paramedic who treated him at the scene also reported Gipson making the same statements.

When Hueytown officers tried to move Gipson from a padded cell to an interview room to speak with SBI agents, testimony showed, he fought and injured the two officers – Cpl. Alex Humphries and Officer Justin Hickey. The struggle left Humphries with a black eye and Hickey with a bloodied nose. Gipson is charged with second-degree assault in the attack on the two officers. Humphries testified that Gipson said, “I’m going to kill you,” and “I’m not going to prison.”

Hickey said Gipson “seemed to be very disgruntled with our race…as a white person, he felt we were there to hurt him,” he said under cross examination by Revill. Hickey said Gipson called them “white mfers” and “said he wanted to kill us.”

Because of the incident, Cunningham could not interview Gipson until the following day. When he did, the agent testified, Gipson told him that somebody named Drew made him strip and took his clothes. Cunningham said they have never corroborated the existence of “Drew.”

Gipson did not tell Cunningham he had killed anyone and said that he injured his fist punching the wall during an argument with his girlfriend. His girlfriend’s mother, who Cunningham said would not allow the investigator into her home, said Gipson did punch a wall but said he wasn’t bleeding from that incident.

Investigators recovered a palm print from the victim’s tractor-trailer that matched Gipson, Cunningham said. Detectives have taken Gipson’s DNA to see if it matched forensic evidence – including blood spatter from Summers’ shirt – but said the results are still in the testing phase. Gipson’s clothing was never recovered. He still had his cell phone with him, however, when he was arrested.

One can only imagine how the constant promotion of the 1619 Project (all of American history is nothing more than the perpetuation of racism against blacks) and a corporate media dedicated to constantly promoting the idea every failure a black individual faces in America is due to the collective power of white racism/structural inequalities/systemic racism/implicit bias/white privilege is motivating these types of attacks from people with obvious mental issues.

Her name is Christine Summers.

Odds are this is the first time you’ve encountered her name or how she died. Were white privilege real and the systemic racism truly holding up all of American life, you’d know every detail about her life and how she died (and who murdered her).