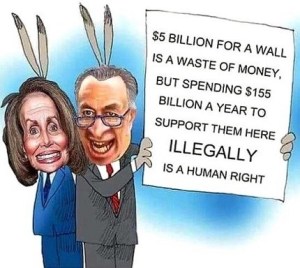 Bridget Bowman reports for Roll Call that Thursday, 12 Republican senators joined every Demonrat senator in voting for a resolution to block President Trump invoking a national emergency at the southern border so as to build the wall with defense funds. Trump had declared a national emergency last month after the Democrat-dominant House refused to appropriate his requested $5+ billion funds for a border wall.

See “The Trump Show” on Trump’s declaration of national emergency to build border wall, and “Ann Coulter: By signing the budget deal, Trump signs away his right as CIC to build the wall“.

The resolution passed the Senate, 59-41, after passing the House late last month.

The Gang of 12 Republicans includes so-called “moderate” senators — one of whom is up for re-election in 2020 — and so-called “conservatives”. 6 of the 12 serve on the Senate Appropriations Committee.

(1) Sen. Lamar Alexander of Tennessee: A 3-term senator and member of the Appropriations Committee said in a statement yesterday ahead of the vote that although he supports the president on border security, the emergency declaration sets a dangerous precedent: “His declaration to take an additional $3.6 billion that Congress has appropriated for military hospitals, barracks and schools is inconsistent with the U.S. Constitution that I swore an oath to support and defend.” Alexander announced last December that he would not run for re-election in 2020.

(2) Sen. Roy Blunt of Missouri: A senior member of the Appropriations Committee, Blunt is concerned about the precedent Trump’s declaration of emergency would set. Blunt was re-elected to a second Senate term in 2016. (He served several terms in the House before running for Senate in 2010.)

(3) Sen. Susan Collins of Maine: Not only is this POS pro-late term abortions, Collins actually co-sponsored the resolution ostensiblyout of concern for the precedent an emergency declaration would set for the powers of the executive branch. The four-term senator is likely to face her toughest re-election next year, with Democrats raising millions of dollars for a yet-to-be-determined challenger after she voted for Supreme Court Justice Brett M. Kavanaugh.

(4) Sen. Mike Lee of Utah: First elected in 2010, Lee announced his support for the resolution Wednesday after Trump rejected Lee’s offer of a compromise to curtail future national emergency declarations through an amendment of the National Emergencies Act to include the automatic termination of future emergencies after 30 days unless Congress authorizes the emergency to continue. Lee said in a statement announcing his decision that “For decades, Congress has been giving far too much legislative power to the executive branch.” One of the most conservative senators, Lee is up for re-election in 2022.

(5) Sen. Jerry Moran of Kansas: A member of the Senate Appropriations Committee, Moran tweeted that “I share President Trump’s goal of securing our borders, but expanding the powers of the presidency beyond its constitutional limits is something I cannot support.” Moran is up for a third term in 2022.

(6) Sen. Lisa Murkowski of Alaska: Another pro-abort POS, Murkowski said in a floor speech earlier this month: “Congress is a co-equal branch of government and as such Congress should stand up for itself.” She is not up for re-election until 2022.

(7) Sen. Rand Paul of Kentucky: Earlier this month, Paul announced at a GOP Lincoln Day dinner that he would support the resolution because Congress did not appropriate the funds Trump was looking to use for the border wall, and “If we take away those checks and balances, it’s a dangerous thing.” A self-described libertarian, Paul was re-elected to the Senate in 2016 after a failed White House bid, and he will not face voters again until 2022.

(8) Sen. Rob Portman of Ohio: Portman had worked with Mike Lee on the compromise resolution. The two-term senator said that while he supported Trump’s request for border wall funding, an emergency declaration is not necessary to secure those funds, and that the declaration would set a “dangerous precedent” by opening “the door for future presidents to implement just about any policy they want.” Portman won re-election by more than 20 points in 2016 and won’t face voters again until 2022.

(9) Sen. Mitt Romney of Utah: Although Romney is a freshman senator, he entered the Senate with a high profile as his party’s 2012 presidential nominee and the former governor of Massachusetts. Critical of Trump in the past, even before Trump officially declared a national emergency, Romney said he “would also expect the president stay within statutory and constitutional limits.” Romney won the open Utah Senate race in 2018 by 32 points, and he is not up for re-election again until 2024.

(10) Sen. Marco Rubio of Florida: Like the others, Rubio too warned of the precedent set by Trump’s national emergency. A member of Senate Appropriations, he said in February that while he agrees there is a crisis at the southern border, “a future president may use this exact same tactic to impose the Green New Deal.” Rubio won re-election by 8 points in 2016 after an unsuccessful run for the GOP nomination for president. Trump carried Florida by just 1 point in 2016.

(11) Sen. Patrick J. Toomey of Pennsylvania: A “conservative” Republican, Toomey had occasionally broken with President Trump in the past, particularly on Trump’s use of tariffs. Toomey told the Philadelphia Inquirer that he supports Trump’s effort to build a border wall, but the declaration of a national emergency was “a very important separation of powers issue.” Toomey narrowly won re-election in 2016 when Trump won Pennsylvania by less than a point.

(12) Sen. Roger Wicker of Mississippi: The two-term senator, who’s the chairman of the Commerce Committee and the second-highest-ranked Republican on the Armed Services Committee, also had “serious reservations” about what an emergency declaration would do to the separation of powers. Wicker said in a statement earlier this week: “The precedent we set this year might empower a future liberal President to declare emergencies to enact gun control or to address ‘climate emergencies,’ or even to tear down the wall we are building today.” Wicker, an Air Force veteran, won re-election comfortably last fall in a state Trump carried by nearly 20 points in 2016.