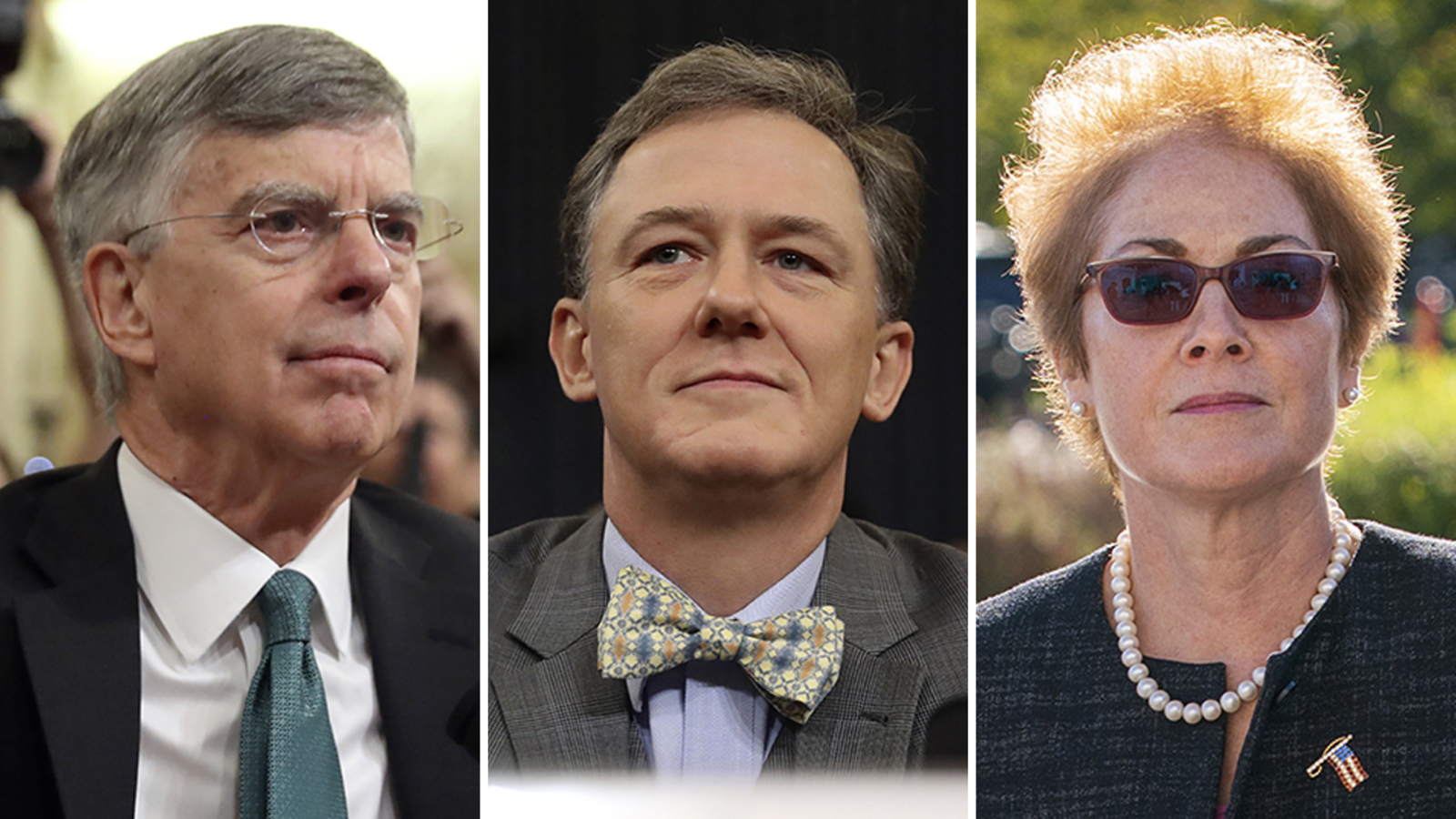 The lawyer for one of the first witnesses at House Democrats’ public impeachment hearings has a resume that includes the Obama White House, former Vice President Al Gore’s office, and House Democrats themselves.

The lawyer for another impeachment witness in the public process raised the specter of impeaching President Donald Trump in 2018, has represented the wife of Sen. Bernie Sanders, I-Vt., and represented associates of President Bill Clinton in the Whitewater probe in the 1990s.

The public phase of the impeachment hearings kicked off Wednesday when George Kent, deputy assistant secretary of state for European and Eurasian Affairs, and acting U.S. Ambassador to Ukraine William Taylor testified under oath to the House Select Committee on Intelligence.

The former U.S. ambassador to Ukraine, Marie Yovanovitch, is scheduled to testify Friday. Trump removed her from the job in May.

Legal experts close to the Trump impeachment inquiry are quick to point out that political experience is not irrelevant in such a proceeding.

That’s not because of a blinding bias, they argue. Rather, an impeachment hearing is both a legal process and political theater, they say, so a witness benefits from having a lawyer with experience on both fronts.

Robbins worked in the Justice Department under Republican administrations but also represented high-profile clients in both parties.

Robbins wrote in the commentary:

The Department of Justice’s description of the role of Individual 1—the president himself—leaves no doubt that career Justice Department prosecutors regard Trump as a full-blown co-conspirator. And most serious-minded criminal lawyers agree that, if these allegations are true, the president, but for his day job, would have been sitting in the dock with his long-time fixer.

The word “fixer” refers to Cohen, who ended up testifying against Trump in congressional oversight hearings.

Robbins noted the Justice Department’s Office of Legal Counsel’s longstanding policy against indictment of a sitting president. However, he wrote, in this case, if Trump served two terms, the statute of limitations for prosecuting a campaign finance violation would be up.

So, “in the face of the president’s acknowledgment that he reserves his right to leverage his very office as a permanent immunity from prosecution,” Robbins wrote, “Congress would surely have no choice but to hold him accountable in the way prescribed by the Constitution.”

Robbins also criticized special counsel Robert Mueller for not concluding in his final report earlier this year that Trump obstructed justice in the Russia investigation, telling Politico: “Despite Mueller’s stated unwillingness even to reach a formal judgment on obstruction, Volume II of the report is an indictment in all but the formalities.”

In private practice, Robbins represented several Clinton White House officials in the 1990s during the federal investigation of Bill and Hillary Clinton’s Whitewater land deal in Arkansas. He was referred to in at least one media account as a “Clinton White House lawyer.”

He also represented Republican I. Lewis “Scooter” Libby, who was Vice President Dick Cheney’s chief of staff in the George W. Bush administration, during the broad investigation of the Valerie Plame matter that began as a leak probe. That lasted from 2005 through 2007, when Libby was convicted of perjury.

More recently, Robbins represented Jane Sanders, wife of the Vermont senator, in a case involving a loan to now-defunct Burlington College, where she had been president, Politico reported in June 2017.

One of Kent’s lawyers is Andrew Wright, who was associate counsel to President Barack Obama from January 2011 to December 2012.

Before working for the Obama White House, Wright was a lawyer for four years with House Democrats for the Committee on Oversight and Government Reform under then-Chairman Henry Waxman, D-Calif. He served as counsel from 2007 through 2009, then as staff director until 2011 for the subcommittee on national security.

Wright was an assistant legal counsel to Vice President Al Gore from May 2000 to January 2001, serving mostly during the time Gore was running for president.

Kent’s other lawyer, Barry Hartman, also works at K&L Gates. Hartman was a deputy assistant attorney general from 1989 to 1992 during the elder Bush’s administration.

Hartman, who joined K&L Gates after serving in the Justice Department, handles criminal matters and civil litigation as well as regulatory matters and congressional hearings.

Hartman also has represented several clients who won civil and regulatory cases against Obama administration agencies, including the Justice Department, the Environmental Protection Agency, and the Nuclear Regulatory Commission.

Taylor’s lawyer, John Bellinger, is a former George W. Bush administration official who has identified himself as a “Never Trump” Republican.

Ballinger was among 50 former Republican national security officials who signed onto an August 2016 letter saying that “None of us will vote for Trump.”

Bellinger, now leading the global law and public policy practice at the law firm of Arnold and Porter, was a legal adviser to the State Department from 2005 to 2009, serving under then-Secretary of State Condoleezza Rice.

Previously, Bellinger was senior associate counsel to President George W. Bush and a legal adviser to the National Security Council at the White House from 2001 to 2005.

None of the four lawyers spoke for the record after phone and email inquiries from The Daily Signal about their past affiliations.