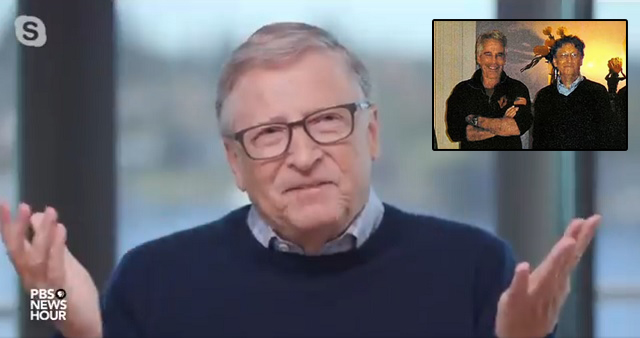 Billionaire Bill Gates started stammering and squirming after being asked about his repeated meetings with child-sex-trafficking blackmail operative Jeffrey Epstein during an interview with PBS released Tuesday.

Gates said he “regrets” meeting Epstein repeatedly in the wake of his conviction for soliciting prostitution from a minor but said that because “he’s dead” now there’s no real lessons to be learned.

JUDY WOODRUFF, PBS NEWSHOUR: I also want to ask you about something else in the public arena. It was reported at that time that you had a number of meetings with Jeffrey Epstein, who, when you met him 10 years ago, he was convicted of soliciting prostitution from minors. What did you know about him when you were meeting with him, as you have said yourself, in the hopes of raising money?

BILL GATES: You know, I had dinners with him. I regret doing that. He had relationships with people he said would give to global health, which is an interest I have. Not nearly enough philanthropy goes in that direction. Those meetings were a mistake. They didn’t result in what he purported. And I cut them off. That goes back a long time ago now. There’s — so there’s nothing new on that.

Note how he refused to say what he knew about Epstein before meeting with him time and time again.

Epstein was funded by billionaires Les Wexner and Leon Black, neither of whom have been held accountable in any way.

WOODRUFF: It was reported that you continued to meet with him over several years, and that — in other words, a number of meetings. What did you do when you found out about his background?

GATES: Well, I have said I regretted having those dinners. And there’s nothing, absolutely nothing new on that.

There’s nothing “new” because Epstein was suicided in prison and the case was covered-up.

Note, he again refused to say what he knew about Epstein and when he knew it.

WOODRUFF: Is there a lesson for you, for anyone else looking at this?

GATES: Well, he’s dead. So, in general, you always have to be careful. And the — I’m very proud of what we have done in philanthropy, be very proud of the work of the foundation. That’s what I get up every day and focus on.

Woodruff didn’t ask him about his flight on Epstein’s “Lolita Express.”

Gates, who has been leading the global response to the covid pandemic despite not being an epidemiologist, went on to say how he funded mRNA vaccines “when it was still viewed as something that would never work.”

WOODRUFF: And so for people watching who wonder about the future of the Gates Foundation, what’s your message?

GATES: Well, I’m extremely lucky that, with the help of Melinda and the incredible generosity of Warren Buffett, we’re able to take these important causes and bring innovation to bear. We were funding mRNA vaccines when it was still viewed as something that would never work. And now that’s turned into a source of some of the very best vaccines. We have great hopes to use that technology for an HIV vaccine. Our work has reduced childhood death rates quite dramatically over the last 20 years. So, this is my second career. We have hired great people. We have made some progress. The visibility of the inequity here isn’t as high as it should be. And maybe one small benefit of the pandemic is, people will realize how weak these health systems are and how diseases like malaria and polio are still out there, and incredible tragedies. So, I’m very lucky to be involved in this work. It’s gone way better than I expected. This will be the focus for the rest of my life.

We’re supposed to focus on how great he is rather than how he flew on the Lolita Express and met regularly with a child-sex-trafficking blackmail operative.

“He’s dead,” so just move on — the rest of our elites sure have!