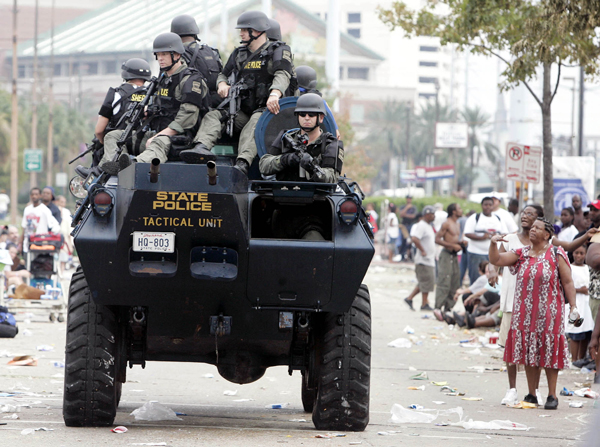 He would begin with “weapons of war,” but we all know it wouldn’t end there.

Sounds like just more liberal campaign hyperbole—but is it?

It has happened before in our nation, just a bit over a decade ago. You may remember it as the Hurricane Katrina gun confiscation operation where law enforcement officers from the city of New Orleans, Parish Sheriff’s Department, State of Louisiana police, US Coast Guard, National Guard troops, US Marshals, and cops from as far away as California swarmed in and illegally disarmed and detained citizens . Take a few minutes and listen to Americans tell their story of police abuse of authority, gun confiscation and violence. WARNING: this and this will also really piss you off!

The NRA and Gun Owners of America stepped in

Lawsuits followed the confiscation of over 700 weapons by the police, but most never recovered their property because authorities demanded receipts or documents proving ownership. Obviously most of that was lost during flooding. Though requested by gun owners, officers refused to provide receipts for weapons taken. What wasn’t lost or forgotten was how quickly armed government agents can mobilize to negate the Constitutional rights of free Americans, using unprovoked violence.

During the NRA/GOA lawsuit against the government, police lied and said they only took stolen firearms or weapons from abandoned houses. Video proved otherwise.

When someone laughs at you for being “paranoid” for believing the government can and will take your guns without provocation, have them sit down and watch the video. Even some of the Guard troops interviewed stated how uncomfortable they were patrolling streets in America as if they were on enemy soil, pointing automatic weapons at innocent civilians, and treating citizens like criminals—but they did it—they were just following orders.

What if we have a nation-wide emergency

Is there any reason to believe a wide-spread calamity won’t be used by authorities as an excuse to disarm you? Thanks, Beto for actually speaking the truth, as inconvenient as it was to the other candidates on that stage. I’m sure it was a thorn in the side of those who wish to quietly move towards national confiscation. But, the cat’s out of the bag…as if we ever doubted their end goal of total disarmament.

Well, at least some eventually got their guns back

These citizens were disarmed at the most critical time, when they needed a means to protect themselves from lawlessness. What good is the recovery of a firearm three years after you needed it to save someone’s life or property? The legal system is an important mechanism to protect rights, but it lags when it comes to protecting citizens

When you have armed bodyguards, walls around your domicile, and ten thousand dollar security systems it is easy to lose track of the little people—you know, the ones across town in high crime neighborhoods, or the ones who must commute to or from work in the dark of night.

If you ever hear a cop say this…

Police may scoff at your need to be armed as they finger the hand grip of their firearms. If you ever hear them tell you that you don’t need one for protection, ask them the last time they actually PREVENTED a rape, robbery, home invasion or murder. It’s easy to be cavalier about another person’s safety when you are packing a badge and a gun to protect your own. If the police were that efficient, we wouldn’t have so many unsolved crimes!

Personally, I’d do this

The government has NO RIGHT to disarm you. You have no constitutional OBLIGATION to turn over your firearms or ammunition. You may be forced, at gunpoint, to go along with the confiscation. I’m not suggesting getting into a firefight with the police, but this Marine would damned sure NOT have them all in one place. Large-scale confiscation sweeps, if they happen, will be swift, with no time to go looking in hidey-holes or digging up everyone’s back yard—get it?

David Brockett is a Vietnam Veteran and former Marine aviator. He has worked in the field of mental health as a counselor and hospital administrator. After retirement he volunteered with the US Forest Service as a wilderness ranger and horse packer. He writes fiction and historical fiction, as well as articles on politics, religion, gun-rights and current events. In his free time he volunteers with veteran’s groups and community projects. He and his wife divide their time between their home state of Texas and Idaho.

Check out these other stories: