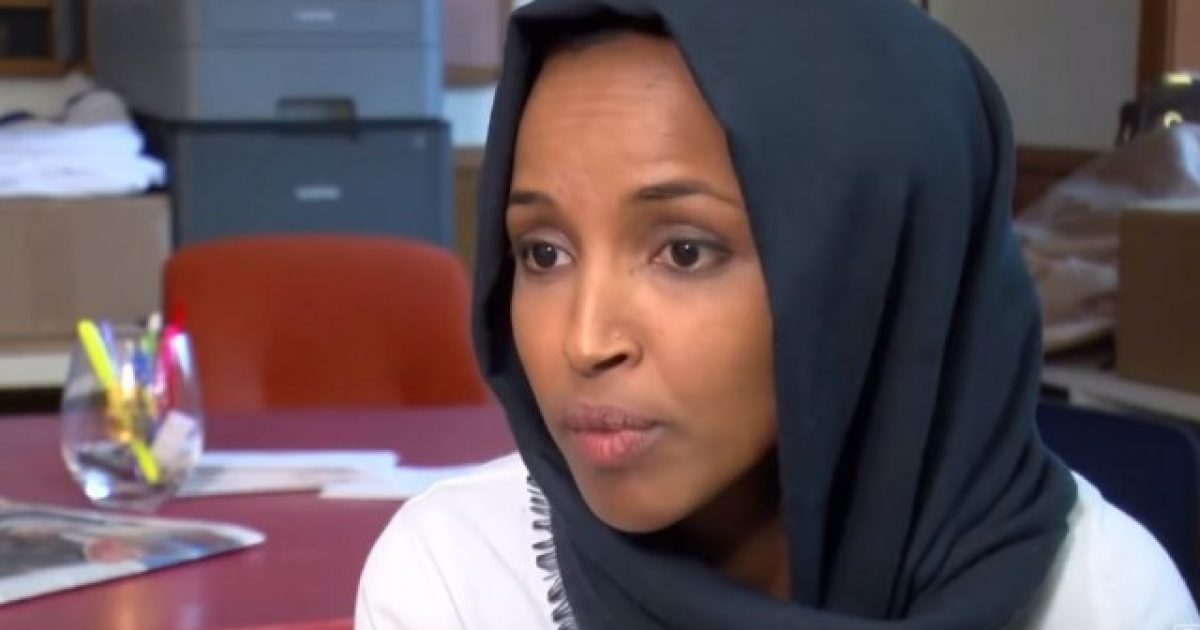 Kirsters Baish’ Opinion| Minnesota Democratic Congressman Ilhan Omar has been dodging rumors that she married a man who has been said to be her own brother.

The Gateway Pundit explains, “In early June Rep. Ilhan Omar (D-MN) was ordered to pay a $500 civil fine for violating campaign finance law. Omar had to pay an additional $3,469 fine for improperly used campaign funds. But the investigation into Ilhan Omar and the findings released by the Minnesota Campaign Finance and Public Disclosure Board revealed something even more serious.”

We are now finding out that the Minnesota Congresswoman might be guilty of having filed fraudulent federal and state tax returns.
take our poll - story continues below

Michelle Malkin came forward a couple of weeks ago to call out Ilhan Omar regarding the alleged “fraudulent marriage to her brother and how she filed joint tax returns with a man who she was not married to,” according to TGP.

Omar swore under penalty of perjury in 2017 while divorcing the man who is questioned to be her brother that she had not seen Ahmed N. Elmi since 2011. She also claimed that she knew no one who could help her get in contact with him.
Now the Gateway Pundit has reported:

Hidden code on a website however shows that Ahmed E. Elmi may have actually designed and set up a website for Ilhan Omar’s sister THIS YEAR and is living in Nairobi, Kenya, the same city Omar’s sister, Sahra Noor lives and works in.

The hidden source code was first reported by investigative journalist David Steinberg. (screenshot below of hidden code via the Daily Caller)

“There is no reasonable explanation for this code to exist besides Elmi working for Noor [Ilhan Omar’s sister],” David Steinberg tweeted. “And that’s a bombshell: In 2017, Ilhan Omar swore, under penalty of perjury while divorcing Elmi, that she had zero contact with him since 2011 — and no clue how to find him.”

There is no reasonable explanation for this code to exist besides Elmi working for Noor.

And that's a bombshell: In 2017, Ilhan Omar swore, under penalty of perjury while divorcing Elmi, that she had zero contact with him since 2011 — and no clue how to find him. (9/x)

According to TGP, the “Instagram account showed photos of Elmi and Rep. Omar’s children with captions and hashtags saying ‘uncle time’ and ‘nieces’ or ‘nephews.’” The Gateway Pundit also reports that “the Grit Partners website is still up and running and the source code was confirmed by The Gateway Pundit. A quick ‘right-click’ on the homepage and a click on ‘view page source’ reveals the page was registered in January 2019 and indeed Ahmed Elmi’s name and Instagram page is embedded in the coding.”

The Washington Examiner reports just why the Ilhan Omar story is so important:

So why are the multiple, overlapping marriages of Rep. Ilhan Omar a matter of public interest? Her fans will attribute it to Islamophobia and sexism while conveniently ignoring the fact that reporters have zero interest in the other two Muslims serving in the House. Her haters will make arguments that she married her brother.

It’s far simpler than that. The evidence implies that she lied about separating from her current husband, Ahmed Hirsi, and it overwhelmingly indicates that she violated federal and state tax law in jointly filing taxes with one man while married to another. Plus, as Luke Rosiak advanced at the Daily Caller, the evidence is mounting that the Minnesota Democrat may have perjured herself during her divorce from Ahmed Nur Said Elmi, to whom Omar maintains she was married both by law and in faith from 2009 to 2011.

Perhaps the explanation for Omar and Hirsi’s shared addresses at that time was entirely innocuous. Prior to her marriage to Elmi, Omar had two children with Hirsi, and it’s completely possible that they had an amicable split and tight finances that made sharing a home easier than moving out. Few would fault her for that, and if Elmi actually did abandon town in 2011, making it difficult for Omar to legally divorce him, the public could easily accept that she unknowingly violated tax laws in jointly filing with Hirsi in 2014 and 2015.

But then why has she treated this issue with so much hostility towards the press? The evidence indicates it’s because she’s covering something up.

Under penalty of perjury during her divorce proceedings, she said that she had no way to contact Hirsi after the summer of 2011 and that he was in London. But eviction records obtained by the Washington Examiner show he was occupying a residence just a few miles away from her Cedar Riverside address a year later. And as Rosiak found, Elmi may have worked for Omar’s sister in 2019 and lives in the same city as her. Presumably after putting Omar through the hoops of obtaining a default divorce, Elmi would be persona non grata among Omar’s kin.

The more salacious question, and yes, the one often racially tinged on decrepit corners of the conspiratorial internet, is why Omar would stage a sham marriage with a British citizen in the first place. Maybe it was to commit some sort of fraud, but the issue is more basic than that.

No one cares that Omar’s been divorced. Sen. Elizabeth Warren has been divorced, and it’s not even brought up as a question during her presidential campaign. Hell, our president is on wife number three and people barely care.

We care about lies and we care about crimes. But most importantly, we care about cover-ups. No matter how liberal our political standards become, people won’t stop wanting honesty from their elected officials.