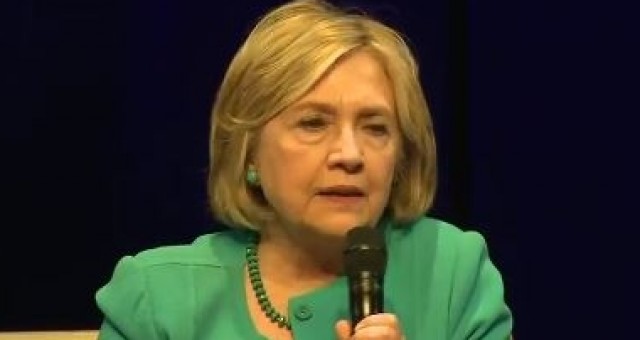 Clinton claimed that “Trump knows he’s an illegitimate president,” going on to state that “impeachment is the appropriate remedy.” Hillary went on, “I am all in favor of what the House is doing. . . . This president has to be held to account.”

Clinton insisted, “When you have a president calling on foreign adversaries for assistance in his political campaigns — which he did in 2016 and which he is doing again — it goes right to the heart of our sovereignty as a nation.”

The infamous whistleblower filed a complaint regarding Donald Trump’s phone call to Ukrainian President Zelensky, which took place on July 25, without any real evidence. It was stated that the President had taken part in quid pro when he requested that Zelensky investigate former United States Vice President Joe Biden and his son, Hunter.

A transcript of the phone call was released by President Trump, in my view, showing no pressure and no threats using quid pro quo.

Take a look at the BS Hillary Clinton has been spewing about President Trump:

Hillary Clinton: "When you have a president calling on foreign adversaries for assistance in his political campaigns — which he did in 2016 and which he is doing again — it goes right to the heart of our sovereignty as a nation." pic.twitter.com/8b33E4cqQ4

Former Secretary of State Hillary Clinton argued on Wednesday that Congress would have engaged in a “dereliction of duty” if it didn’t pursue impeachment after details surfaced surrounding President Trump’s July 25 phone call with the president of Ukraine.

“I think it became absolutely unavoidable when the summary of the phone call came out, plus the whistleblower compliant,” Clinton said during an appearance in “The View.”

She indicated that while Trump’s other actions were debatable as impeachable, the Ukraine call was more clearly a problem.

“This was in the pursuit of his official duties as president of the United States and that phone call very clearly indicates an effort to not only pressure but in effect extort the president of Ukraine over much-necessary military assistance that had already been passed by the Congress,” Clinton said.