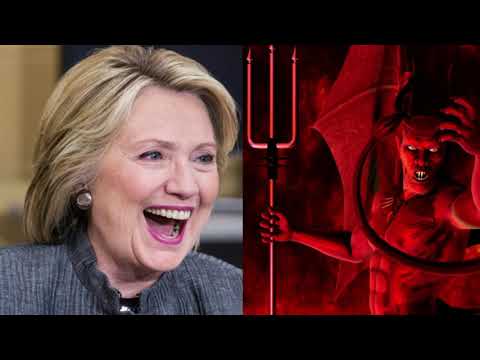 There is a lot of speculation that Hillary is going to toss her hat in the ring for 2020 and a lot of that may depend on what happens with this ridiculous Trump Impeachment circus.

I’m not sure if America truly understands the implications of a Hillary Presidency.

We’ve been asking that question for years now.

Hillary Clinton claims to be a Methodist, but there is disturbing new evidence coming to light that she is familiar with Satanic rituals, and Christians in America are giving dire warnings. Many will scoff at anything to do with the topic of pure evil or dismiss it as nonsense, yet we have uncovered proof that Hillary not only knows about Satanism, but her own words prove her philosophy reflects occultist beliefs.

Hillary Clinton is under fire today after WikiLeaks exposed a John Podesta email, where he was invited to a Satanic ritualistic dinner. However, what is more disturbing is an email that was just uncovered from close aide Cheryl Mills to Hillary which mentions a Satanic ritual:

“With fingers crossed, the old rabbit’s foot out of the box in the attic, I will be sacrificing a chicken in the backyard to Moloch . . .” [via Wikileaks]

For those not familiar, Moloch is the demon associated with child sacrifice and abortion. In the Old Testament, the Canaanites sacrificed their children to Moloch, and God admonished them that this was a grave sin in Leviticus 18:21.

But, what do expect from those who support partial birth abortion? These people are diabolical, and it’s not a surprise that mentioning Moloch is normal banter. Who mentions making a sacrifice to a demon and expects the email recipient to fully understand what the hell you are talking about? Only those who get Satanic rituals, I would think.

Hillary Clinton’s ties to satanic rituals and the occult have been well-documented for decades.

And a source claimed many FBI agents consider Clinton to be “the Antichrist personified.”

The Clinton Satanic network has now been exposed on a national level thanks to WikiLeaks.

Editor’s Note: The Wikileaks video is no more. Imagine that.

The censorship has hit so many former great conservative websites very hard, but here is another article on the subject that I found from CharismaNews:

Saul Alinsky established the ground rules for modern-day liberal “community organizing” during the culturally explosive 1960s and early 1970s, and one of his most engaged students was Hillary Clinton.

The Alinsky-Clinton connection has been a popular target of conservative commentators for years, ever since her senior thesis at Wellesley College was made public. That she looked up to the man who in large part converted her from the “Goldwater Republican” of her youth into the liberal-socialist-progressive we know today is now well-documented.

But with it increasingly likely she will be the Democratic presidential nominee for the November general election, it is important to note her adoration for Alinsky went much further than a simple mentorship relationship. in 2014, the Washington Free Beacon obtained copies of previously unpublished correspondence between Clinton and Alinsky.

The two had remained in correspondence even after she moved on the Yale Law School, and he had advised her on organizing campus activism. But on July 8, 1971, the then-23-year-old Clinton—who was living in Berkeley, Calif., and interning at a left-wing law firm—penned a letter to Alinsky that paints their relationship in an entirely new light.

“When is that new book (Rules for Radicals) coming out—or has it come and I somehow missed the fulfillment of Revelation?” she wrote, referring to him simply as “Saul” in her letter. Her letter reached the Chicago-based organizer while he was on a trip to China, but his personal secretary, Georgia Harper, penned a quick reply.

“Since I know (Alinsky’s) feelings about you I took the liberty of opening your letter because I didn’t want something urgent to wait for two weeks,” she wrote. “And I’m glad I did.”

Clinton’s curious turn of phrase—”fulfillment of Revelation”—takes a more sinister connotation when applied to the context of Alinsky’s dedication to Rules for Radicals. It was his last book, and the culmination of his life’s work, published less than two years before he died.

“Lest we forget at least an over-the-shoulder acknowledgment to the very first radical: from all our legends, mythology, and history (and who is to know where mythology leaves off and history begins—or which is which), the first radical known to man who rebelled against the establishment and did it so effectively that he at least won his own kingdom—Lucifer.”

Here is an article I wrote on the subject in 2016:

Is Hillary Clinton a Satanist?

From the archives. Originally published November 5, 2016.

The recent bombshell regarding John Podesta’s “spirit cooking” ties is far more than disturbing, but slightly less than surprising.

Hillary Clinton has been letting us know for years that she has a deep disgust for God and a deeper appreciation for satan.

How could a true woman of God do any of the horrible things she has done?

Though few have come out and said it, it is clear that many think Hillary is a satanist.

Remember Ben Carson at the RNC?

Clinton was a frequent pen pal of Alinsky, if not something more.

For those who don’t know, Alinsky was a known satanist who actually dedicated his book, Rules for Radicals, to Lucifer.

As we reported last year a former Clinton associate made the startling accusation that Hillary is indeed a satanist:

Larry Nichols is a former Green Beret and a longtime associate of Bill Clinton. The two men first met in the late 1970s when Bill was an up-and-coming politician. When Bill was Arkansas governor, Nichols was the marketing director of the Arkansas Development Finance Authority, an Arkansas state agency that was one of the entities investigated by the Senate Whitewater Committee.

On the Pete Santilli radio show of September 24, 2013, Nichols admitted that he had killed people as the Clintons’ hit man or murderer-for-hire. (See “Bombshell: Long-time Clinton associate says he killed people for Bill & Hillary“)

On June 24, 2015, interviewed by Alex Jones for InfoWars, Nichols dropped another bombshell. He said, beginning at the 28:44 mark in the audio above:

“Back when Hillary was first lady, she would go home on the weekends to California with Linda Bloodworth-Thomason and some of the [inaudible] women, and they went to a church for witches. Witches,witches, witches…. You know that lady that was tryin’ to run for the Senate and sometimes she’d gone to some place where they did witch stuff? Hillary went to a church and worshiped Satan.”

Back in May, video exposed Hillary cackling with glee as the words “under God” were omitted from the Pledge of Allegiance at one of her rallies.

So should we be surprised that her campaign chair, John Podesta, is engaging in bizarre satanic sex rituals?

Spirit cooker and Podesta associate Marina Abramovic donated the maximum amount allowable to the Hillary campaign back in May.

So is Hillary a satanist?

I certainly know what I believe.

A lot has been made of her potentially being the first woman president.

Some say she will be the first lesbian president as well.

But I believe that a Hillary presidency would put a satanist in The People’s House.

The first satanic president of one nation under God.

Here’s an excellent video from 2019 which explores the same question.

Is Hillary Clinton a Satanist?

Here are some more interesting articles on the subject from DC Clothesline. DC Dirty Laundry was not yet in existence in 2016, when this was a hot topic. (expect broken links, missing pics and missing vids – these articles are mostly from 2016).

Hillary Clinton is evil and her mentor was a proud satan worshipper.

Though many of the websites that reported this story are considered “conspiracy” sites, including my own, Dr. Ben Carson exposed and explored the possibility for America to see.

I would think that might lend some credibility to the theory, which I believe is fact.

The question is, are you paying attention?