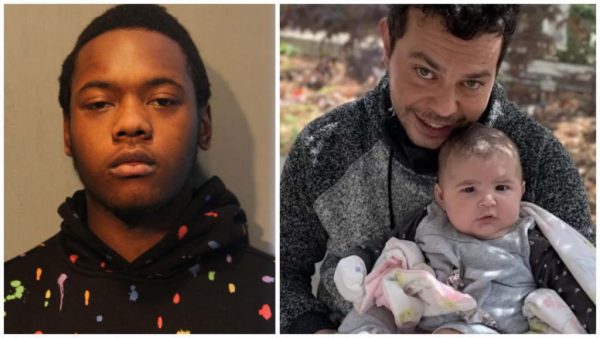 An Italian immigrant. A father. Murdered by a random black male in Chicago. Murdered by a black individual in Chicago. [#8: Beloved Hyde Park bartender was killed by a robber who has 3 pending felony cases, prosecutors said, CWChicago.com, March 7, 2022]:

An 18-year-old man who has three felony cases pending in juvenile court — two for illegal gun possession and one for armed carjacking — stabbed and robbed a beloved bartender who was walking home in Hyde Park last month, prosecutors said.

Keante McShan is the eighth person charged with killing or shooting — or trying to shoot or kill — someone in Chicago this year while awaiting trial for a felony.

Prosecutors said Diego Damis, 41, was walking home after his shift at The Cove Lounge, 1750 East 55th, when McShan began following him around 5 a.m. on February 25.

Surveillance video allegedly showed McShan checking parked car doors to see if they were unlocked and entering a car before he spotted Damis.

On the 4900 block of South Greenwood, McShan stabbed Damis repeatedly and took his wallet, cash, and bank card, prosecutors said. Video showed Damis kneeling on grass next to the sidewalk as the attacker ran away. Damis fell backward and remained there until a passerby discovered him more than an hour later and called for help.

He was pronounced dead from multiple stab wounds to his chest, abdomen, and arm.

Meanwhile, surveillance video allegedly showed McShan returned to checking car doors after the murder as he left the area. Prosecutors said he used Damis’ bank card to buy a box of Newport cigarettes at a gas station shortly after the crime. The purchase was video recorded.

Investigators used a series of video recordings to track the killer to an apartment building on the South Side. They searched the address in a law enforcement database and learned that McShan lived there and was wanted on juvenile warrants. Detectives also determined that photos and videos of McShan from previous incidents were consistent with the person who killed Damis, prosecutors said.

Police set up surveillance on the apartment building Friday and arrested McShan as he walked out of the complex while wearing many of the same unique clothing items that the attacker wore, including a multi-color hoodie, prosecutors said.

Officers recovered additional clothing associated with the killer, a knife, and other evidence, including Damis’ wallet, debit card, and Ventra card from McShan’s apartment, prosecutors said.

His public defender said he has a month-old baby who was born premature and is currently hospitalized. McShan went to school through the eighth grade and has worked at a carwash for a month, the attorney said.

A white Italian immigrant is murdered by a black immigrant, who had three pending felony cases. His name is Diego Damis.

Whites lives matter. One day we will remember this.