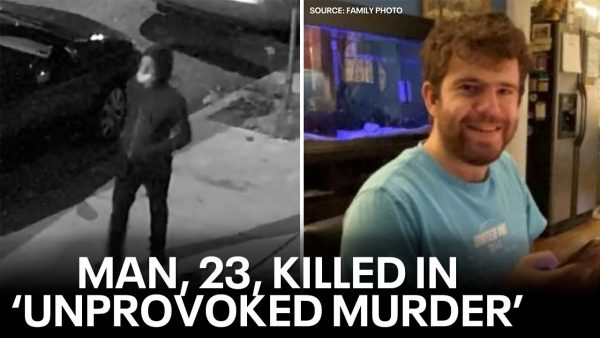 A blatant black on white murder in Philadelphia… but the murdered white guy family brags about his support for the 2020 Democrat Ticket, so isn’t this nothing more than an Eloi sacrifice to the Morlocks? [Man killed in shooting near Drexel identified as recent Temple University alumnus, CBS NEWS, September 22, 2022]:

PHILADELPHIA (CBS) — The search is on for the gunman who shot and killed a 23-year-old man near Drexel University on Thursday. The man was identified as Everett Beauregard, a recent Temple University alumnus and former intern of U.S. Rep. Brendan Boyle.

Police say several bullets were fired, including one that flew right into a nearby apartment.

The shooting happened in a neighborhood that’s known for housing Drexel students off-campus.

“It kind of hit a little close to home,” Drexel student Michael Ricca said. “I am only about two blocks away.”

A little after midnight Thursday, police responded to reports of a shooting on the 400 block of North 35th Street in West Philadelphia.

When officers got to the scene, they found Beauregard laying unresponsive on the sidewalk, bleeding heavily from a single gunshot to the back of his neck.

Police rushed him to Penn Presbyterian Hospital but were unable to save him.

Beauregard was pronounced dead at about 1 a.m. While investigating the shooting, police found four shell casings. Three of them were just feet away from where the victim was lying.

Investigators also discovered a bullet had been shot through the window of one of the first-floor units of a nearby apartment complex – not far from where people were sleeping.

“There were two young adults inside that property, they were sleeping at the time,” Chief Inspector Scott Small said. “They actually went through a bathroom window and lodged in the bathroom wall.”

Beauregard recently graduated from Temple University and was in the process of finalizing plans to begin his MBA.

In a statement, Beauregard’s family wrote, “Everett was always willing to lend a hand to any anyone who needed his attention, love and humor.”

Beauregard’s family also says he was very proud of his job and previous leadership role in support of the Democratic 2020 presidential campaign.

Investigators say they don’t know what led to the shooting and they’re still searching for the shooter.

They found multiple private security cameras on nearby apartments and they’re hoping the footage will give them a clue as to who the killer is.

Why lament his death at the hands of a black male, when he dedicated his life in support of Democratic 2020 presidential campaign?