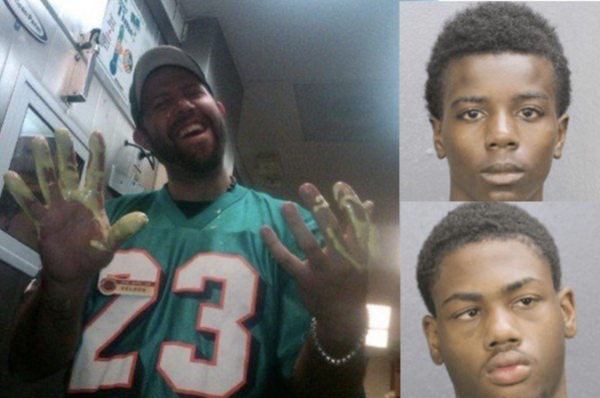 Only in a script eagerly given a greenlight by a Hollywood executive (or quickly made into a miniseries for a streaming service) does the following story ever have a white suspect and black victim.

In reality, there are two black suspects and one white victim.

His name is Nelson Vega. : Dropping His Girlfriend Off, White Male Murdered and Carjacked by Two Black Teens

[Boys, 16, charged as adults, accused of killing man to go for joy ride in his Mercedes, South Florida Sentinel, October 2, 2020]:

Two teenagers accused of murdering a bartender to steal his Mercedes were charged as adults Friday.

Gershon Woods, who turns 17 on Saturday, and Nathaniel Williams, 16, could face life in prison as a result of being treated as adults by the courts, facing murder charges in the killing of Nelson Vega last month.

Nelson Vega, who was described by friends as a charismatic 39-year-old bartender from Miramar, had left the J.P. Mulligan’s sports bar with his girlfriend. He walked her to her door and, according to the teens’ account to police, left the keys in his car with the engine running. When he came back to the car, one teen claimed Vega came at them, and so both teens fired at Vega at the same time.

According to a police report on Sept. 13, Vega suffered two gunshot wounds to his chest and a third shot to his pelvis.

Woods and Williams appeared in court Friday online from the Paul Rein Detention Facility. They are charged with second-degree murder and carjacking and are being held without bond.

All cases that might qualify as first-degree murders are being filed as second-degree murders because the grand jury is unable to meet due to the pandemic, said State Attorney’s Office spokeswoman Paula McMahon. When those proceedings resume, prosecutors expect to present this case to grand jurors to decide the appropriate charge, she said.

“With the information they have now, prosecutors anticipate that they would seek life in prison … if the grand jury issues an indictment,” she said.

Never relax around Africans in America is the maxim. It’s a saying with far more veracity and verifiable evidence to support the claim then those who claim “diversity is our greatest strength.”

Never, ever leave your keys in the ignition or keyless vehicle running as your pump gas or drop your girlfriend off. Never. Ever.

Never relax. Never drop your guard when surrounded by the boundless joy of diversity.

Because only in heavily scripted television series or Hollywood films is diversity a strength.

In the real world, it’s just the undoing of social capital and nations.