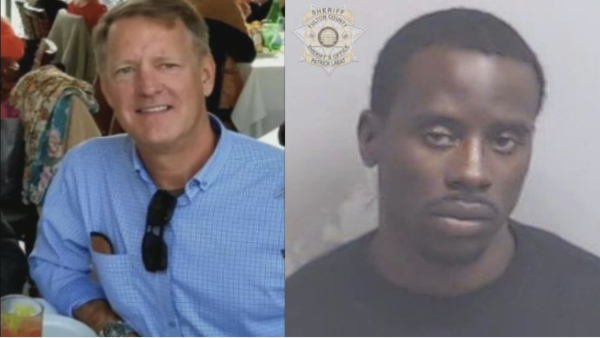 Were America truly dominated by implicit bias and structural inequalities, the Atlanta Journal-Constitution would publish the faces of who is behind the fatal and non-fatal shootings in the city, making America’s purported Black Mecca one of the most dangerous cities in the USA.

Three black individuals are the reason why an elderly white male was shot to death in a heavily gentrified area of Atlanta.

Were white privilege real, this story would be not just the number one story in Atlanta, but one of the top stories in America, for it helps show why white people seek to live in lily-white suburbs far from the rot of urban city cores, where violent crime and out-of-control gun violence by blacks is a fact of every day life.

His name is Thomas Arnold, a white man who spent his entire life volunteering to make Atlanta a better place to live. He’s now dead, murdered by three black males. [Arrest made in homicide case near Atlanta BeltLine, ReporterNewspapers.com, March 15, 2022]:

Atlanta Police have arrested one suspect and are looking for two others in the Feb. 26 shooting death of 60-year-old Thomas Arnold near the Atlanta BeltLine in Inman Park.

Brandon Williams, 28, was arrested Saturday at a hotel near the Atlanta airport and APD are looking for two other men seen in surveillance video from the BeltLine. The trio are seen breaking into a black BMW and calling out to a women walking on the Eastside Trail.

Police want to talk to the car owner and the woman seen in the footage to gain more information about the suspects. The reward for information has been increased to $35,000. Anyone with information should call Crime Stoppers at (404) 577-8477.

Williams has been charged with felony murder, aggravated assault, and possession of a firearm by a convicted felon.

Arnold, a beloved Poncey-Highland resident, was walking home from dinner in Inman Park when he was shot near the intersection of Elizabeth Street and Bernina Avenue. He was also a longtime volunteer with local nonprofit Trees Atlanta.

“He took care that the trees were properly planted so that they would thrive and give back to the community for generations to come. Tom was leaving his own living legacy,” Levine said. “Tom was very social and he loved his friends, always interested in what was going on with everyone. Loyal and good-natured, Tom’s positive energy, friendship, and love will be forever missed.”

Thomas Arnold was trying to make Atlanta a better place to live for all citizens. He cared about the community and believed his efforts would impact people living in Atlanta long after he was gone. He was murdered by three black males.

Maybe it’s time for people to ask why white privilege is such a bad thing, if so few people are willing to point out the racial group making Atlanta unlivable for decent people, and why the suburbs of the city stretch out to nearly Alabama and South Carolina along I-85, and toward Tennessee along I-75.

Why must white people build new cities in once pristine farmlands – only to seek a momentary glimpse of what America could be – if only to be murdered upon gentrifying a city their ancestors fled because of black crime?

His name is Thomas Arnold.