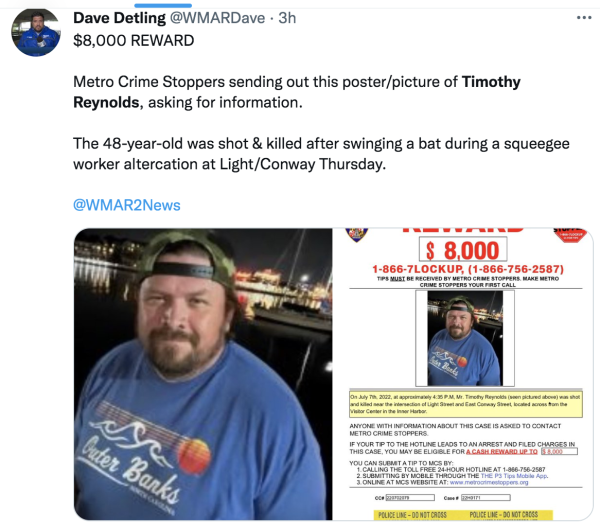 Had Timothy Reynolds lived, he’d have been harassed for life for being a white racist, and probably been charged with a hate crime. Though he was harassed by black people engaging in illegal activities, his actions would have warranted far more scrutiny. But he’s dead, shot by a black Baltimore squeegee kid who harasses drivers in the 70% black city because the black elected political authority protects lawlessness above the civilization white people long ago established in the city. [Squeegee kid kills driver after altercation in Baltimore’s Inner Harbor, police say, WJLA.com, July 8, 2022]:

BALTIMORE (WBFF) — A squeegee worker fatally shot a driver Thursday after the man tried to attack a group of them with a baseball bat near the Inner Harbor, police said.

The 48-year-old driver was taken to a hospital, where he died of his injuries. The suspects fled before officers arrived. The bat, covered in blood, could be seen at the scene. The victim’s car was also left at the scene with the radio still playing.

Police are still searching for the gunman. Harrison asked anyone who had photos or videos of the shooting to come forward and share them with the police.

Witnesses said the shooting happened just outside the upscale 414 Light Street Apartments tower, where monthly rents can be as much as $4,800.

Jolene Allen, an Inner Harbor resident, said many of her neighbors are fed up with the squeegee workers. Mostly teenage boys, the workers clean windows of passing cars for tips, but many do it without drivers wanting the service.

“People are feeling they need to come here and protect themselves. … They bash the window if they don’t give them money,” Allen said. “You can’t even stand here and not feel like you might get shot by errant gunfire.”

The teens have been involved in multiple violent incidents in recent years. The city has even developed a social services program to get the young men other employment. But it seems to have had little impact on the number of young people stationed along downtown streets.

The practice is technically illegal, but police don’t attempt to clear the streets of the squeegee workers under Baltimore City State’s Attorney Marilyn Mosby’s policy of not prosecuting so-called low-level crimes.

“The crazy thing is, the squeegee workers felt the need to protect themselves. To make a few dollars,” Jackson wrote on Twitter.

Harrison said there was another incident earlier Thursday with squeegee workers in the same area that led to an arrest. He said officers recovered a handgun.

State Sen. Antonio Hayes confirmed to FOX45’s Keith Daniels that he was the victim of the incident. He said the details of the incident were a distraction but said the squeegee worker problem has gone unaddressed for too long.

“This activity is dangerous and a threat to our city’s progress; I am committed to work with all elected officials and community leaders to fully address this vexing problem,” he said.

Harrison also said the social services program was also operating on Thursday at the same intersection working to find the young people other jobs.

Mosby said she was “completely dismayed” by the violence.

“As this is an open and pending investigation, there are limits to what I can say, but I want to be unequivocally clear that today’s episode is completely unacceptable and should serve as a flashpoint for our entire city,” Mosby said. “There are too many guns on our streets and those who willingly turn to violence as a means of resolving conflicts will be held accountable to the fullest extent of the law.”

City Councilman Eric Costello, who represents the Inner Harbor, called the incident “tragic — and yet preventable.”

“Two lives were destroyed today and one person is dead because we have failed to adequately address this situation,” Costello said. “I again call on BPD leadership to ensure enforcement of the laws already on the books that prohibit this illegal activity, immediately.”

Mayor Brandon Scott called the incident a sad reminder that people too often turn to violence to solve their problems.

“I want to be very clear – if you are on the streets of Baltimore and endanger the safety of others or turn to violence to solve your problems, we will hold you accountable,” Scott said. “Through enforcement and engagement, we continue to work with BPD and other partners to deter young people and adults from being involved in conduct that puts lives at risk.”

Anyone with information about the shooting is asked to contact detectives at 410-396-2100 or call the Metro Crime Stoppers tip line at 1-866-7LOCK-UP.

The saddest question to ask in 2022 America is this, which completely annihilates the idea of white privilege by simply posing the query: would Reynolds have faced harsher punishment had he lived for brandishing a bat in the face of black squeegee kids, than being murdered by a black squeegee kid? Had he lived, he’d have faced hate crime charges and civil rights violations (see Derek Chauvin).

Being murdered by blacks is better than surviving an encounter with blacks who are above the law.