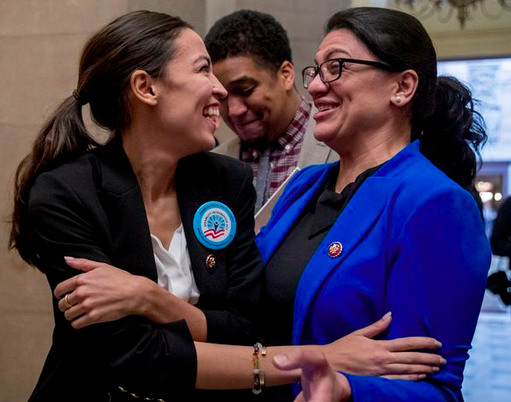 It should not surprise anyone that Rep. Rashida Tlaib would trivialize the Holocaust. Tlaib is a product of the Palestinian education system, despite being raised in Michigan. Holocaust denial (here, here, here) is rampant in Palestinian schools.

In fact, the Palestinian Authority leader, Mahmoud Abbas, has written and spoken extensively about the subject. In 2018, Abbas stated that the “Holocaust were related to the “social function” of Jews in banking” and in his 1982 doctoral thesis he minimized the extent of the Jewish genocide at the hands of the Nazis. This is the kind of grotesque anti-Semitism that Tlaib was raised in, so naturally she would agree with AOC’s statements which compared U.S detention centers to concentration camps.

RADDATZ: Democratic Congresswoman Rashida Tlaib addressing protestors outside a detention facility in Clint, Texas this week. She joins me from Detroit. Welcome to “This Week”. I want to get your reaction first of all to Acting Secretary McAleenan.

TLAIB: So in regards to the – to the report – regards to what he was saying, it’s so contradictive of what we got in the inspector general’s report recently. I mean what I saw was a number of people at 14, up to 14 in one area sleeping on the floors, a number of them saying they didn’t bathe within 15 days where Congresswoman Ayanna Pressley went up to the water feature, you know, next to the – where the water comes out, she turned the knob and there was no water that was coming out. And when they – and literally every single woman confirmed what the one woman said, which is “I asked for water and they said go drink it from the toilet.” I think there was too many of us, I mean there was close to over 10 or 11 members of Congress, several of them were in the same cell unit where the 14 women or so was at. And then I was in another unit – area where the door they finally were able to open up the door for me to speak to a grandmother who has been there for 40 days and had not seen her grandson that she came with since then, who is also special needs.

RADDATZ: You were – you were – Alexandria Ocasio-Cortez, your colleague who was at the border with you compared the facilities to a concentration camp. Do you agree with that comparison?

TLAIB: Absolutely, I mean there’s a number of experts that say this is – because it’s traumatic. I mean I don’t know how to explain to people what we saw when we’re explaining to people and they’re kind of looking back and saying well that can’t be true. I said but we were all there, I mean you have Congressman Castro, Melanie, Norma, all of us were there. We saw what we saw and we heard from the folks that were in the facilities, and some of them had not seen their children since being there. What you need to also know is do you know the mere touch, the mere even me holding the hand broke them down in tears? That tells you they’re under a lot of trauma that they are in a facility that is dehumanizing. And you know, this is a choice by the current administration, they are choosing to not allow asylum seekers to go through the legal process. They’re choosing to separate –