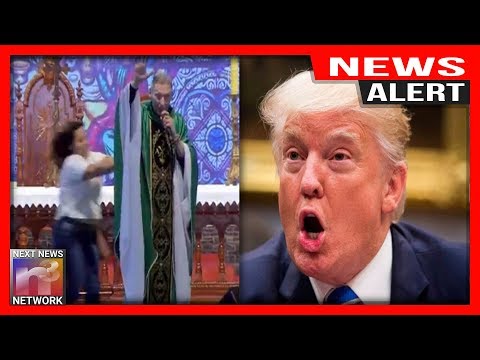 Many are celebrating this woman pushing a priest off a stage in Brazil. The mass was being broadcast widely and word has it that she did it because…

Here’s Gary to tell you why…

So injuring priests is now celebrated in the LGBT community?

This unidentified woman is now a hero to lesbians and gays all over the world.

Is this how you make a point?

Violence against a priest who just ran a youth camp for 50,000 kids is evil.

Horrifying children to make your point?

Here are more details from Newsweek:

Brazilian priest who is celebrated in the country for his lively sermons was violently pushed from a stage yesterday while delivering mass in Cachoeira Paulista, São Paulo.

The incident occurred shortly before 3 p.m. after a woman was able to rush past security and approach Father Marcelo Rossi during a ceremony at the headquarters of Canção Nova, which is a Brazilian Catholic community known for broadcasting religious material online.

Rossi, a preaching powerhouse who has reportedly sold millions of musical records in Brazil and was once dubbed a “pop-star priest” by the Associated Press, was seen in video footage of the unexpected mass invasion toppling from the stage as onlookers watched on in shock.

The Catholic priest was giving an address during the closing ceremony of a youth camp which had an estimated 50,000 attendees. He was not seriously injured and officials noted he soon returned to the stage to complete his sermon, which was being streamed to the internet.

The woman—who has not been identified—was detained by the local police.

In the footage, which has attracted tens of thousands of views on YouTube, a woman in a white T-shirt and carrying a handbag runs at Rossi from his right hand side. As religious figures watch on from behind, the microphone picks up the sound of his fall. The woman appears to be smiling.

Read the rest at Newsweek…

As previously mentioned, she did appear to be smiling after her actions.

Is this what the left has become?