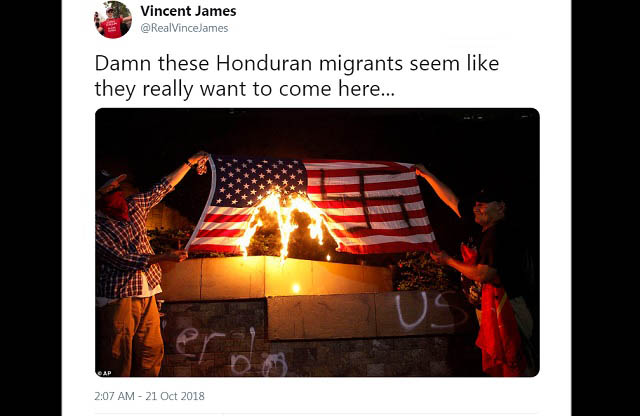 These are the people demanding we open our borders.

You can see this photo as the very final image in this Associated Press slideshow covering the migrant caravan headed to the US.

Two people burn a United States flag during a protest in favor of the caravan of migrants that is currently stuck on the Guatemala-Mexico border, in front of the American embassy, in Tegucigalpa, Honduras, Friday, Oct. 19, 2018. The U.S.-bound caravan that once totaled more than 3,000 Central American migrants looked to be about a third that size Saturday morning, when its remaining members woke up on a bridge that divides the borders of Guatemala and Mexico and waited to get past a crossing guarded by hundreds of Mexican federal police. (AP Photo/Fernando Antonio)

It appears they set multiple flags on fire, as this picture from the BBC shows a second flag set ablaze and treated like garbage:

They also gave us the middle finger:

Buried in a News 8 broadcast from San Diego was footage of illegal migrants and their supporters on the U.S. side breaching the U.S. fence on the border, waving a big Honduran flag, victory-style, and whipping out a big middle finger at America.

In times past, arriving immigrants used to kiss the earth. Today, they wave the middle finger at us. Look at these photos, both from News 8 and the CBS national report, rough and blurry, admittedly, showing just what that caravan was about in all its anti-American tenor, which frankly, should have been the lede to the story…

For a publicity stunt as staged as the migrant caravan from Central America, one that one might have expected to have been carefully choreographed to advance their narrative of needy people with sob stories needing asylum, what does it say that all we see are military-aged young men, some with tattoos, illegally entering the U.S. under the Honduran banner and angrily flashing the middle finger in what might be their first moments in America?

Here’s some more shots of the poor “refugees.” The migrants in the caravan proudly waved the flags of their own countries as they organized to invade our own:

The caravan waves Honduran flags as they trespass borders. If they're so proud of Honduras, why not stay there and improve their country! pic.twitter.com/7ZcR4jTPPg

As a reminder, the most high-profile Honduran migrant in years was the mother of the Honduran girl on TIME Magazine’s June cover who it turned out separated herself from her husband with a good job and her three other kids and paid a coyote $6,000 to sneak her into the US.

It's all a scam: Migrant Mother and ‘Crying Girl’ on TIME Cover Separated Herself from Husband With Good Job, 3 Other Kids, Paid Coyote $6K to Sneak Back in US https://t.co/Cyv27MXjgd