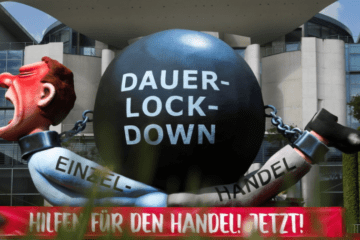 One of the most mysterious paradoxes of the modern church is how most evangelical pastors can be so deaf and dumb when it comes to the Biblical Natural Law principles of Liberty. And nothing illustrates that reality any more graphically than the way most evangelical pastors have rolled over and played dead regarding the antichrist Covid narrative. As I have said before in this column, most of the resistance to Fauci’s fascism is coming from outside the church. On the whole, the evangelical church has submitted to the beastly Covid Empire lock, stock and barrel.

This is in spite of the fact that evangelicals claim a born-again relationship with Jesus Christ, which if true, would mean that they would be indwelled with the Holy Spirit, Who Jesus said would “guide [them] into all truth.” (John 16:13) Certainly, this Holy Spirit instruction would reveal the system of antichrist to them.

I have brought several messages over the past 21 months showing from the Scriptures how the Covid narrative is a devilish, beastly, antichrist system.

In my mind, any pastor or Christian who does NOT see the antichrist nature of the Covid narrative is more than blind; he or she is spiritually blind, which casts much doubt on their spiritual confession.

To make it even more perplexing, there are several outspoken anti-Covid narrative priests, bishops and cardinals from the Catholic Church who are courageously resisting the draconian Covid system.

It is a very strange and very sad day when leaders from a false religious system have more understanding regarding the God-given Natural liberties of man than do leaders from within Christian orthodoxy.

A German cardinal has sparked controversy by claiming that the coronavirus pandemic has been used by the likes of George Soros and Bill Gates to create a global “surveillance state.”

The Covid-19 pandemic has sparked “chaos” and “turmoil” stemming not only from the “lacking knowledge” about the transmissibility and danger of the virus itself, but from the will of the super-rich to “snatch an opportunity to bring people in line,” Gerhard Ludwig Mueller said in an interview with Austria’s St. Boniface Institute last week. He is a high-ranking judge at the Vatican court.

The world’s financial elites are now using the pandemic and the measures governments take to fight the spread of the virus to subject people to “total control” and establish a global “surveillance state,” he added. The St. Boniface published a video showing a small part of the interview and the cardinal has since confirmed to the German dpa news agency that the footage is genuine.

“People, who sit on the throne of their wealth,” see an “opportunity to push through their agenda,” the cardinal said, naming Microsoft co-founder Bill Gates, billionaire George Soros and the head of the Davos Economic Forum, Klaus Schwab, among those behind the alleged global control scheme.

The cardinal then accused the global financial elites of an attempt to bring forth “a new man” created “in their own image and likeness,” adding that he would not wish such a fate on himself. “That has nothing to do with democracy,” the former Regensburg bishop, who once headed the Congregation for the Doctrine of the Faith, said.

Ask yourself, dear evangelical friend, have you heard your pastor say anything like this—even once? If not, why are you still attending a church with such an obviously politically controlled and spiritually silenced pastor?

A Catholic priest has slammed vaccine mandates from the pulpit, saying that “no earthly king or president…gets to dictate what we must put into our bodies.”

Addressing his congregation at Christ the King Church in Towson, Maryland, Father Edward Meeks of the Ordinariate of the Chair of Saint Peter used Catholic doctrine to defend the right of bodily autonomy through his homily.

Speaking on the feast of Christ the King, November 21, Meeks reminded the congregation that “you and I belong to another realm, another kingdom. This earthly kingdom, this earthly realm is not our home; it is part of our journey.”

Mentioning the “ongoing conflict” within the human being, Meeks noted that in saying that “Jesus is our Lord and King, what we’re saying is that we owe our allegiance and our loyalty first and foremost to Him and to His kingdom.”

“So then how does this principle work itself out in our daily lives, practically speaking?” he asked rhetorically.

Drawing from Scripture, Fr. Meeks defended the right of individuals to refuse forced medical intervention, saying that the body must be cared for since it is a “temple of the Holy Spirit”:

Our King tells us in His written word that our bodies … are temples of the Holy Spirit. First Corinthians, 6:19: “Do you not know that your body is a temple of the Holy Spirit within you, which you have from God? You are not your own, you were bought with a price, so glorify God in your body.”

Among all the other things that that implies – if you do, if you do take it seriously – is this: that no earthly king or president or public health official or billionaire technocrat gets to dictate what we must put into our bodies – into these temples of the Holy Spirit.

For decades, I have been flummoxed by the inability (or unwillingness) of evangelicals to understand the evil, conspiratorial nature of our Enemy. If God would warn the prophets, priests and people of Old Testament Israel of the evil conspiracies of the Enemy in that day (Ezekiel 22:25 – 29; II Samuel 15:12; Jeremiah 11:9) and if evil conspiracies are noted taking place against the Early Church (Acts 23:13), are we to think that that same diabolical Enemy has abandoned his evil treacheries in our day? Such a proposition is utter foolishness!

TRENDING: Communism Never Died, It Was Cleverly Repackaged for the Historically Impaired and Useful Idiots

For the past 21 months, our Arch-Enemy has been manipulating the medical and pharmaceutical industries, including hospital officials, local health boards and health officers, educational systems, including school teachers and principals, the major media, Big Business and politicians from both parties to launch the most diabolical and devilish antichrist system of our lifetimes. And the vast majority of evangelical pastors don’t even see it.

The blindness of evangelicals to the antichrist system known as Zionism has blinded their eyes to many things, including the antichrist nature of the Covid Empire.

P.S. I am introducing a brand new message DVD entitled Christian Zionism Has Taken Bethlehem Back To The Days Of Herod.

I began the message with a detailed description of the wickedness of King Herod and his family. I showed how the evil family of Herod constantly intersected—in a very menacing way—with the life of Christ and the apostles.

I also relayed my visit to Bethlehem (and Palestine) and told of my preaching in a church in the city of Christ’s birth—comprised mostly of Palestinian Christians—and the fond impression I had of those wonderful people.

I went into some detail to show how the rise of the Religious Right in America back in the 80s (which I was much a part of) has enabled the Zionist Israeli government to torment and terrorize Palestinian Christians for many decades now.

(I, again, urge readers to get the powerful book written by renowned Israeli historian Ilan Pappe entitled The Ethnic Cleansing Of Palestine. This book tells the true story of how Israel became a state off the murder, rape, genocide and ethnic cleansing of the Palestinian people. I consider this book MUST-READING.)

I also gave a somewhat graphic description of the kind of life Palestinian Christians are forced to endure under Zionist domination and how evangelical Christians in America are facilitating Israel’s persecution of Christians because of their acceptance of the false prophecy doctrines of Scofield Futurism.

I urge readers to get this brand new DVD message: Christian Zionism Has Taken Bethlehem Back To The Days Of Herod.