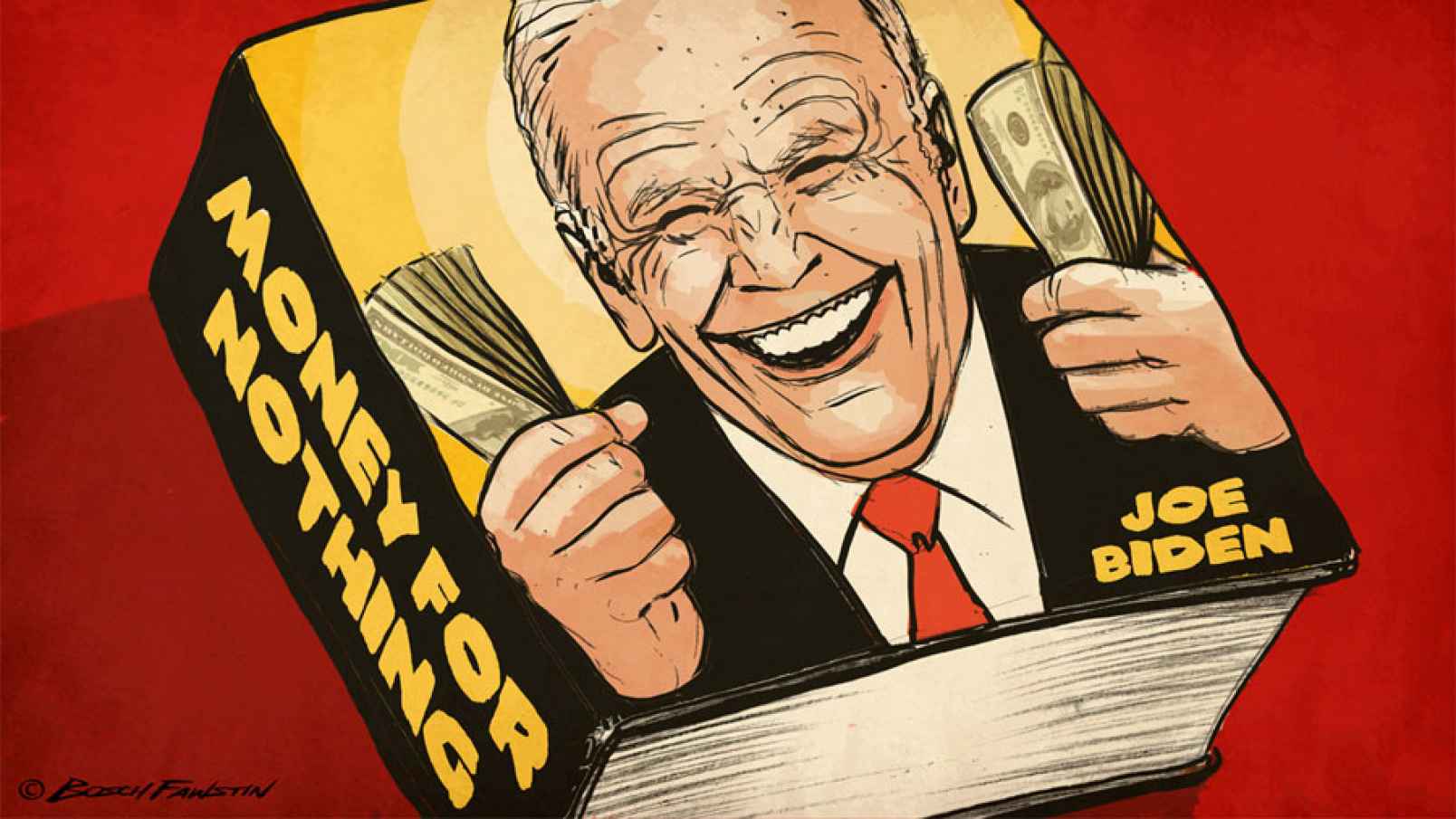 In the final years of the Obama administration, Joe Biden’s net worth was estimated at -$947,987. The minus sign was the most important part of that figure. The negative numbers weren’t implausible. After Obama won, Biden disclosed that he was carrying as much as a staggering $465,000 in debt.

But despite being a million in the hole, after his administration was done, he moved into a 12,000 foot estate that looks like a poor man’s replica of the White House with 5 bedrooms, 9 bathrooms, a wet bar, 2 kitchens, a sauna, 8 fireplaces, parking for 20 cars and a master bedroom on an entire floor.

That’s in addition to buying a $2.7 million vacation home in Delaware and his original lakeside home.

Where did all that money come from? As with Bernie Sanders and Hillary Clinton, part of the answer lies with some very lucrative book deals. The same year that Biden moved into his miniature White House, Macmillan offered Biden and his wife a multi-book contract worth unknown millions. That was quite a lot of money for a retired veep who hadn’t even announced that he was running for again.

Biden’s previous literary adventures hadn’t exactly set the publishing world on fire. On taking office, Random House had paid him a $9,563 advance to record an audio version of Promises to Keep. The campaign book sold some 49,000 copies and netted under $200 in royalties in 2009.

No, there are no missing zeroes there.

(Though doing far better than Cory Booker’s disastrous book, down in the basement at #205,437.)

Even Stacey Abrams is doing better than Biden at #14,018.

Biden’s book did debut at the top of the bestseller list. It may be performing badly on Amazon because people aren’t really buying the book to read it. They’re buying access to Joe Biden.

Joe had gotten better at selling books. Not because of what was inside them. But by selling himself.

When Marty Walsh, a good friend of Biden, won the election to run Boston, his 1,500 inaguration guests all got copies of Biden’s book. Mayor Walsh claimed that helping prop up Biden’s multi-million book contract so he could afford a 12,000 foot estate with 9 bathrooms was a way of spreading his message about “the importance of the middle class and bringing people together”.

The University of Utah hosted Biden as its keynote speaker. Instead of paying him, it bought 1,000 copies of his book to give out to students. Biden’s people pushed this story in the media as if it were a charitable act. The book purchase was funded by a grant from the O.C. Tanner Company.

Biden’s books hadn’t become more interesting a decade later. Promises to Keep had faltered because he had been a longshot candidate. Promise Me, Dad copies were moving, not so much because people were reading them, but because they were a vehicle for gaining access to the 2020 Dem nominee.

His book tour consisted of selling tickets to hear him discuss his book and get an autographed copy.

His American Promise tour included a copy of Promise Me with every ticket sold. At a D.C. bookstore, a VIP package of $448got you a chance to meet Biden and a signed copy of the book. A VIP package in Austin, Texas, got you a signed copy and only went for $325.

Meanwhile, actually hosting Biden was a nightmare. The University of Buffalo paid Biden $200,000 to give a speech. CAA, one of Hollywood’s biggest talent agencies, which represents the likes of Robert Downey Jr, Sandra Bullock, and Johnny Depp, had the university sign a contract in which “the Artist” was to receive a “full-length mirror”, a meal of angel hair pomodoro, a fridge with 3 different kinds of sodas, and a ban on any “projectiles that can be thrown”. Excepting, apparently, copies of his book.

Because, booksellers would be selling copies of Promise Me, Dad on site.

Speakers using book giveaways as part of, or in place of, their honorarium, is nothing new. But Biden, like Hillary, appeared to be blurring the line between public speaking and monetizing a future candidacy.

Biden’s book sales promoted his candidacy, put millions in his pocket and allowed individuals, organizations and special interests to potentially trade access in exchange for buying his book. When a company with lobbying interests sponsors a 1,000 book buy, it’s indirectly providing a benefit to Biden. Would it be doing so if Biden hadn’t been a serious presidential prospect in 2020?

And would Macmillan have signed Biden to such a generous contract any other way?

Jill Biden’s follow-up, the second book in the multi-million contract series, Where the Light Enters: Building a Family, Discovering Myself, came out in May and sold some 7,000 copies.

Numbers like these are a long way from hits. Michelle Obama’s memoir, Becoming, sold over 10 million copies. What Happened, Hillary Clinton’s conspiracy theory post-election response, debuted with 300,000 copies. Multi-million-dollar deals can be justified with sales figures like these.

That’s a lot better than Biden is doing.

Biden’s third and final book is, in theory, still ahead, but election campaign books tend to flop. Hillary’s Stronger Together tanked. Nobody remembers Obama’s, Change We Can Believe In. We can guess two things about Biden’s campaign book. It’ll have the word “promise” in it and no one will actually buy it.

And, several memoirs in, what does Biden even have to write about?

Joe Biden has been around for 76 years. We’ve heard all his stories. Including the ones he made up. Especially those. Two memoirs seem like more than enough for a hack who spent his career in politics.

The real story isn’t in the words that, likely some ghostwriter, put together for Biden. Considering his history of plagiarism, that’s for the best. If Joe wrote a book, it would have begun with, “Call me, Ishmael”, “It was a dark and stormy night” or “It was the best of times, it was the worst of times.”

Biden’s true memoir is not in what he says, but what he does and how he does it.

The way he sold his memoir tells us far more about him than the words between the covers. How he made millions and turned a million in the hole into a multi-million vacation home and a miniature White House tells Biden’s story more evocatively than all the anecdotes meant to appeal to the working class.

The real story of Promise Me, Dad, is how he once again made millions working the system and has gone from more debt than most Americans can imagine to a luxurious lifestyle they can’t even dream of.