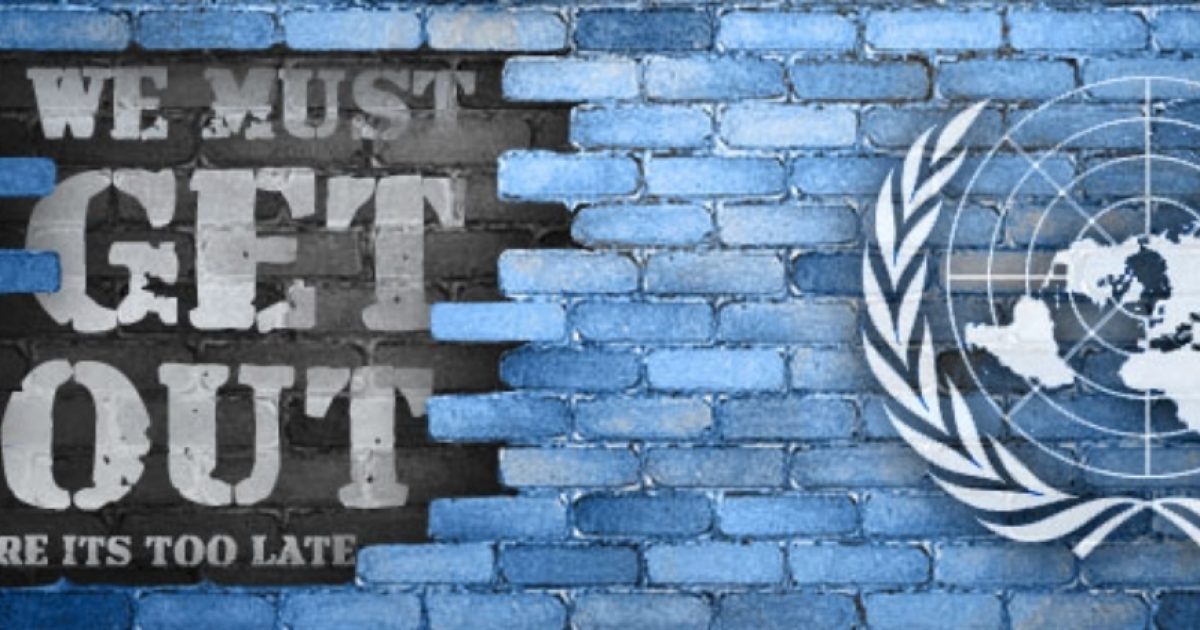 If you are with me, then you know that the US needs to get out of the wasteful, anti-American, anti-Christians United Nations. Once again, a bill has been reintroduced to Congress to do just that: Get us out of the UN.

HR 204, the American Sovereignty Restoration Act of 2019, was reintroduced by Rep. Mike Rogers (R-AL), the current ranking member on the House Committee on Homeland Security, this month and was referred to the House Committee on Foreign Affairs, but don’t expect it to just pass with ease, especially with anti-American Islamist Ilhan Omar (D-MN) on the committee.

Additionally, the bill seeks to eliminate both assessed and voluntary contributions to the UN by the US, terminate all funding of peacekeeping operations and eliminate the UN from US property, as well as revoke any status of diplomatic immunity for any officer or employee of the UN, “including any organ, specialized agency, commission or other formally affiliated body of the United Nations) or any representative, officer, or employee of any mission to the United Nations of any foreign government.”

It would also repeal the following:

Should the bill be passed into law, it would become effective two years after its enactment, which frankly seems far too long to enact.

Congressman Rogers issued a press release saying, “One of my first priorities in this new Congress was to make sure this bill was reintroduced. The United Nations is a disaster and our country bankrolls over 20 percent of its annual budget. The UN continues to attack our greatest ally Israel, and they continue to attack American ideals like the Second Amendment. President Trump has done his part to reign [sic] in the UN’s continual attacks on American sovereignty, but it’s time we did more.”

The legislation has been introduced in Congress for decades. However, the current president’s publicly expressed hostility to globalism and his oft-stated support for U.S. sovereignty make the issue especially salient right now. In Congress and in the administration, as well as among everyday Americans, anti-UN sentiment is surging. Even some Democrats are fed up with the UN’s criticism of Israel. Advocates of the measure are urging Americans to contact their representatives, senators, and the White House in support.

Indeed, Trump has already announced that the United States would withdraw from or defund a vast collection of UN agencies and programs. Among the most high-profile so far: the disgraced UN “Human Rights” Council, the UN Educational, Scientific, and Cultural Organization (UNESCO), the UN Migration Compact, the UN Paris Agreement on “climate,” the UN Relief and Works Agency, and more. He has also repeatedly told the UN that America rejects the “ideology of globalism” and that Americans — not the UN or other foreign bodies — would be in charge of governing America.

Representative Rogers, one of the leading advocates of getting the United States out of the UN in Congress today, has said that many of his constituents in East Alabama agree with his position that American involvement in the globalist organization should end immediately. Calling the UN an “inefficient bureaucracy” and a “complete waste of American tax dollars,” the congressman noted that it “works against America’s interests around the world” and continues to “attack our rights as U.S. citizens.”

Another regular co-sponsor of the bill, Representative Thomas Massie (R-Ky.), told The New American that there are many reasons why the U.S. government should get out. “The best thing that you can say about the United Nations is it’s mostly ineffective and a waste of money,” said Congressman Massie, who campaigned for an “Amexit” from the UN after the British people voted for a “Brexit” from the European Union. “That’s the best thing you can say about it. So I’m glad that they are somewhat ineffective, but I don’t like that we waste the money.”

But there are many other concerns and reasons why he thinks America should get out. “It’s full of dictators, and it’s also something that I don’t think our sovereign government should defer to,” he explained. “For instance, a lot of these foreign relations bills that come in front of us in Congress and the whereas clauses — they might say ‘whereas the UN has said this,’ or ‘the UN decided this, now therefore be it resolved’ — well that’s almost an automatic no for me, because why would I defer to the United Nations if we’re a sovereign country?”

Listen to the interview with Congressman Massie below.

Please phone your representative at 202-225-3121 and your senators at 202-224-3121 in support of cosponsoring and passing H.R. 204 to Get US Out! of the UN in the House and introducing, cosponsoring, and passing a companion bill in the Senate. Let them know that you too reject the ideology of globalism and want Congress to likewise do the same by voting in favor of terminating U.S. membership in the United Nations.