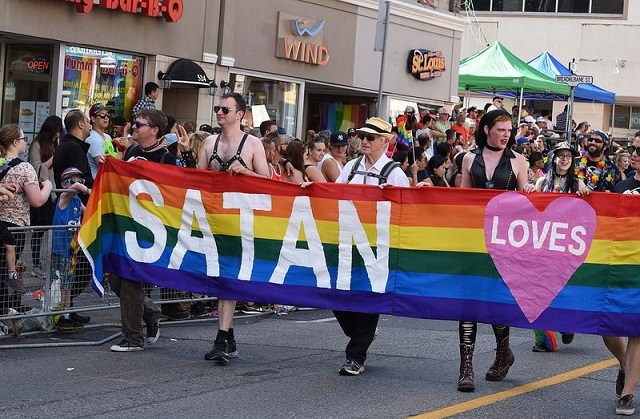 On Nov. 16, 1993, then-President Bill Clinton, a Democrat, signed the Religious Freedom Restoration Act (RFRA) that “ensures that interests in religious freedom are protected” into law, with an almost-unanimous approval by Congress. Every House member approved of the bill; only three senators voted no.

Incredibly, both the House and Senate versions of RFRA were sponsored by Democrats: Rep. Chuck Shumer (NY) and Sen. Ted Kennedy (MA).

Then is then, and now is now.

The Democrat Party that spearheaded RFRA has become the hate-America, hate-God Demonrat Party that now is bent on the all-but-in-name repeal of the same law it once championed.

In an op/ed for the Washington Examiner, November 14, 2018, former Rep. Ernest Istook (R-Okla.), who now teaches political science at Utah Valley University, reports that even before the Nov. 6 election, 50 House Democrats had co-sponsored H.R. 3222, a bill to gut the Religious Freedom Restoration Act (RFRA). With a majority of Demonrats now in control of the House of Representatives after the recent mid-term elections, there are now 172 House Democrats who support H.R. 3222, as their party takes control of the House.

H.R. 3222, sanctimoniously and deceptively titled the Do No Harm Act, is sponsored by Rep. Joseph Kennedy (D-Mass.) and co-sponsored by 170 other House members, all Demonrats, one of whom is the anticipated incoming chairman of the House Judiciary Committee, Rep. Jerrold Nadler (D-NY), 71. That committee would be in charge of approving the undoing of RFRA.

Instead of a head-on repeal of RFRA, H.R. 3222 and S. 2918 take a sly approach by creating a long itemized list of exemptions from the Religious Freedom Restoration Act, thereby diminishing and undermining RFRA’s protection of religious freedom. The exemptions include sexual orientation, gender identity, and abortion. In effect, our Constitutional First Amendment right to freedom of religion would be declared less important than other claims never mentioned in the Constitution and often not even legislated by elected officials.

H.R. 3222 would declare that religious freedoms must yield when they run counter to the LGBTQ agenda or to other progressive causes such as abortion rights. Pushing this are progressive groups which claim that religious beliefs are just a cover for discrimination, bigotry, and hate….

The turnaround [since RFRA] dramatizes how culture and politics have changed in 25 years. Secular values have been given priority and religious freedoms have been narrowed.

Istook warns that HR 3222 and S 2918 will also reverse the Supreme Court’s Hobby Lobby and Masterpiece Cakeshop decisions. State-level versions of the Religious Freedom Restoration Act are also being attacked. Those were enacted in 21 states after the U.S. Supreme Court in 1997 ruled that RFRA protects only against intrusive laws on the federal level.