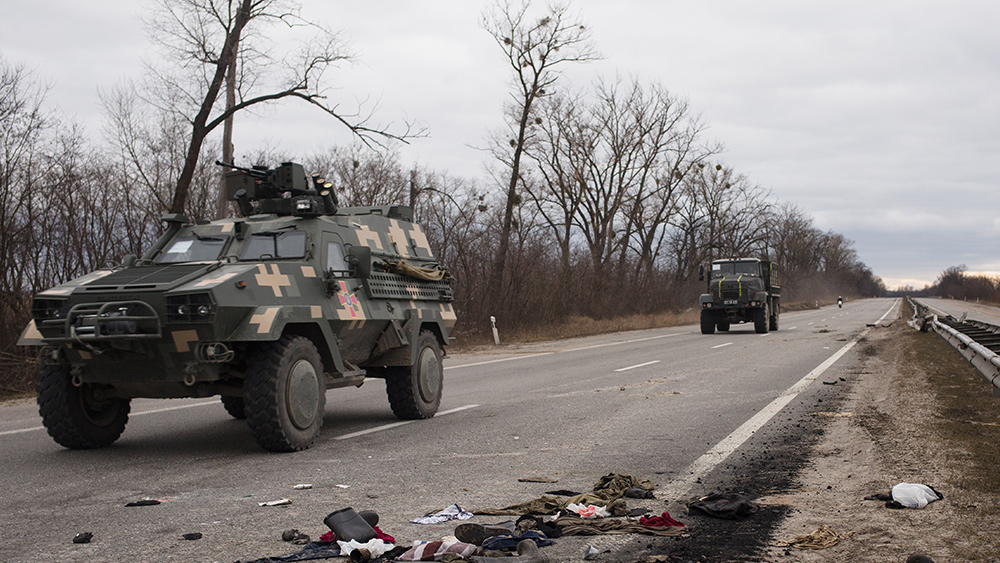 (Natural News) While the Western world has blamed Russia for invading Ukraine — and by the standards of international law, Vladimir Putin’s invasion certainly is illegal — the so-called ‘victim’ in all of this mess isn’t so innocent either.

The longer the war progresses, the more we learn about just how nasty and corrupt Ukraine really is, and to be honest, that makes sense, given that the Bidens were involved in shady business deals there.

According to Great Game India, human rights investigators have now found neo-Nazi torture chambers inside the country and they look as though they have been well-used against Russian troops, in fact.

“Russian and Donbas investigators have gathered volumes of evidence dating back to 2014 on probable war crimes committed by Ukrainian neo-Nazi organizations against Russian forces, Donbas militia members, and civilians. Additional proof of similar acts has surfaced since Moscow launched its demilitarization campaign in Ukraine,” the report states.

“Russian security troops patrolling in the liberated Kherson region uncovered a makeshift torture cell that might have been utilized by neo-Nazis or the Ukrainian military,” the report continued.

According to the outlet, investigators discovered a corpse inside the facility dressed in Russian military fatigues and missing both legs. The corpse, discovered near the village of Zelenovka, was booby-trapped with an explosive, according to sources who discovered the facility.

“The rigid body, presumably that of a Russian serviceman, was found in the basement of the ‘Old Oak’ roadside cafe along the M-14 highway in Zelenovka. The body has remnants of special military clothing used by the Russian Armed Forces. The body has no legs, shows signs of torture, and has a slit larynx,” said one of the investigators, according to Great Game India.

The report said the body was allegedly discovered on top of an anti-tank mine with more explosives nearby.

In addition, investigators found syringes — most likely for injecting narcotics into victims about to be tortured — as well as a large number of plastic containers believed to have once stored U.S.-made Javelin anti-tank missiles that were strewn about.

Investigators took a video of the scene and gave it to various media outlets.

“Officials in Russia, the Donetsk and Lugansk People’s Republics, and Ukraine’s regular army have devoted several years towards collecting evidence of potential war crimes in the Donbas, including the torture and killing of citizens and Donbas militiamen in a labyrinth of hidden prisons,” said the report.

The discovery of the neo-Nazi torture chamber comes after earlier reports detailing the brutality of Ukraine’s Nazi battalions, including Azov towards Russian soldiers, most of whom have been conscripted to fight this war.

In late March, Ukrainian forces posted some video on social media showing them posing with what appeared to be Russian prisoners of war who were lying in pools of blood with their hands tied. One Russian troop was shot and killed while someone else took a video of the killing. And last month, a mercenary told the Danish media that Ukraine’s forces were executing captured Russian soldiers.

“I’ve heard about one successful prisoner exchange, and that’s it. People are being killed,” said the mercenary, who is using the pseudonym ‘Jonas’, in an interview with Denmark’s TV2. The channel confirmed that it knows his real identity and that he really is in Ukraine.

International laws of warfare to which both Russia and Ukraine are signatories prohibit the killing of captured combatants, and demands that they be treated humanely and be provided medical attention if required. The execution of prisoners of war is prohibited.

That is true, of course, but then, international law requires there be a predicate for invading a sovereign country — such as suffering an attack as the U.S. did at Pearl Harbor or on 9/11 — before invading.

Also, Russia is a signatory to the Budapest Memorandum on Security Assurances, which called on Moscow, along with London and Washington, to guarantee Ukraine’s security after it surrendered Soviet-era nuclear weapons that were on its soil when the USSR dissolved in 1990.

So there is a lot of blame to go around here; both sides are guilty.