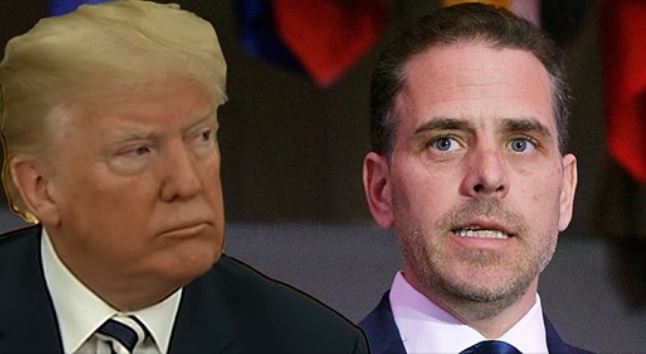 Opinion| Mark Sidney| More evidence that Trump is now the one doing the punching has just emerged.

After the DS & Democrat’s latest failed efforts to over turn the results of the 2016 Presidential election, without so much as dinging Trump’s approval rating, now is the time for the President to start putting the DS on their heels.

In fact, according to Gallup, POTUS’ approval rating is at an all time high, and higher than the Dems’ ‘Lord and savior’ Barack Hussein Obama, at this point in his Presidency.

Now that Trump has fought off the latest BS attempt to overturn the votes we all cast back in 2016, it appears that team Trump is ready to start dishing out doses of the Democrats’ own medicine.

It looks like Hunter Biden’s free ride and absurdly hedonistic, silver spooned, drug induced, strip club frequenting, stripper knocking up, 6 figure car driving, lifestyle is going to come under the microscope, if it has not already.

The Washington Examiner is reporting:

‘The U.S. Treasury Department has started turning over confidential banking records related to Hunter Biden in response to requests from Senate investigative committees.

A spokeswoman for Sen. Ron Wyden, the ranking Democrat on the Senate Finance Committee, told Yahoo News that the department has already started turning over records. The Wyden spokeswoman criticized the Treasury Department for “rapidly complying” with the requests, calling the Republican-led Senate investigation of Biden a “sideshow.”

“As a matter of routine, we don’t discuss sensitive third-party material during ongoing investigations. It’s unfortunate that Democrats whom we’ve kept in the loop on our investigations would recklessly seek to interfere with legitimate government oversight,” Grassley’s spokesman Taylor Foy told the Washington Examiner.’

The Examiner went on to explain that Senator Grassley and Johnson’s committees have been investigating whether the Obama administration took action, using the power of their offices, to further the business interests of Hunter Biden, during the time his father was Barry’s VP.

The Republican senators requested that the Treasury Department’s Financial Crimes Enforcement Network provide them with suspicious activity reports involving Hunter Biden, Devon Archer (Hunter’s business partner), Rosemont Seneca Partners (their firm), Burisma Holdings, as well as additional companies and individuals. The deadline for handing over the records to the Senators was said to be Dec. 5, 2019 (as per the letter linked above).

The Washington Examiner went on to explain ‘Banks and financial institutions are required to file “suspicious activity reports” when they notice unusual transactions that could indicate illegal activities such as money laundering, terror financing, or fraud.

A spokesperson for Johnson did not respond to request for comment. On Wednesday, Grassley and Johnson also requested Hunter Biden’s official travel records from the U.S. Secret Service.’

It looks like the Republicans have been working quietly behind the scenes to collect all the intel they can on just what was going on during the Obama years when it came to Hunter Biden and his … ‘suspicious’ dealings abroad.

After hearing President Trump pull no punches today, I truly hope that this is the moment that Trump and company start indicting those who have committed crimes against the tax payers, the nation and the US Constitution.