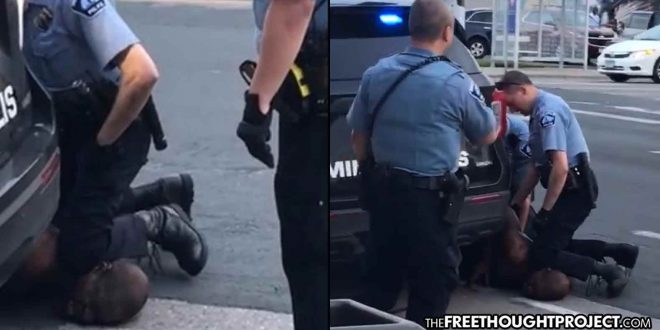 Minneapolis, MN — After the death of Eric Garner in 2014 shook the nation, the phrase “I can’t breathe” has become a chilling symbol for violence doled out at the hands of the state. TFTP has reported on multiple instances in which entirely peaceful and often innocent people have muttered those words just before police officers squeeze the last bit of life from their bodies. Tragically, as the video below shows us, this is still happening.

Monday night, police officers in Minneapolis responded to a call over an alleged “forgery in progress.” When cops arrived, they found a man, who appeared to be in his 40s — who “fit the description.”

“Officers were advised that the suspect was sitting on top of a blue car and appeared to be under the influence,” the police statement said. “Two officers arrived and located the suspect, a male believed to be in his 40s, in his car. He was ordered to step from his car.

“After he got out, he physically resisted officers. Officers were able to get the suspect into handcuffs and noted he appeared to be suffering medical distress. Officers called for an ambulance.”

The man died soon after, the statement said, adding, “At no time were weapons of any type used by anyone involved in this incident. … Body worn cameras were on and activated during this incident.”

As the disturbing video shows, the above description by police leaves out many details. The man, who had only fit the description of a forgery suspect was thrown to the ground by police and held under a police officer’s knee for five minutes. Five minutes with a knee on his neck.

“My stomach hurts. My neck hurts. Everything hurts. … (I need) water or something. Please. Please. I can’t breathe, officer. … I cannot breathe. I cannot breathe.” That was followed by more groaning and as the last moments of life left this man’s body, officers did not help him up or remove the knee from his neck.

In an ongoing commentary captured in the video taken by Darnella Frazier, a male onlooker says, “That’s bulls—t, Bro. You’re stopping his breathing right there, Bro. Get him off the ground, Bro. You’re being a bum right now.”

“They kept telling us ‘if he can talk he can’t breathe,”’ Frazier wrote on Facebook. Sadly, the cops were wrong.

After watching the incident unfold and realizing that the officers could’ve gotten the man in the car in all this time, an onlooker makes a disturbing observation. The cops appear to be enjoying treating this man like this.

The man says the officer is “enjoying that. He’s a bum, bro. You could have put him in the car by now. He’s not resisting arrest or nothing. You’re enjoying it. Look at you. Your body language – you bum. You know that’s bogus right now.”

The female onlooker repeatedly urges the officers to check the subject’s pulse. “He’s not responsive right now,” a bystander says. “He’s not moving.”

After kneeling on the man’s neck for five minutes, an ambulance arrives and takes the man away. But he was already dead.

According to CBS news, the FBI has since been called in to investigate and the officers involved have been suspended.

After the video began to go viral on Tuesday, Mayor Jacob Frey responded with anger in a passionate Facebook post:

Being Black in America should not be a death sentence.

For five minutes, we watched a white officer press his knee into a Black man’s neck. Five minutes.

When you hear someone calling for help, you’re supposed to help. This officer failed in the most basic, human sense. What happened on Chicago and 38th last night is awful. It was traumatic. It serves as a reminder of how far we have to go.

For the better part of the night, I’ve been trying to find the words to describe what happened.

All I keep coming back to is this: this man should not have died.

What we saw is horrible. Completely and utterly messed up.

The man’s life matters. He matters.

He was a human being and his life mattered.

Whatever the investigation reveals, it does not change the simple truth, he should still be with us this morning.

This does not reflect the values Chief Arradondo has worked tirelessly to fulfill.

To our Black community, to the family: I’m so sorry.

Below is this disturbing footage.

UPDATE: Since we first reported this story, the officers involved were fired. According to HuffPo:

Four Minneapolis police officers were fired Tuesday following the death of George Floyd, a Black man who died on Monday after an officer kneeled on his neck while he was handcuffed on the ground, shouting that he couldn’t breathe.

Police Chief Medaria Arradondo announced their terminations during a news conference. He did not publicly identify the officers.

“It is the right decision for our city,” Mayor Jacob Frey said of the firings. “We’ve stated our values and ultimately we need to live by them.”