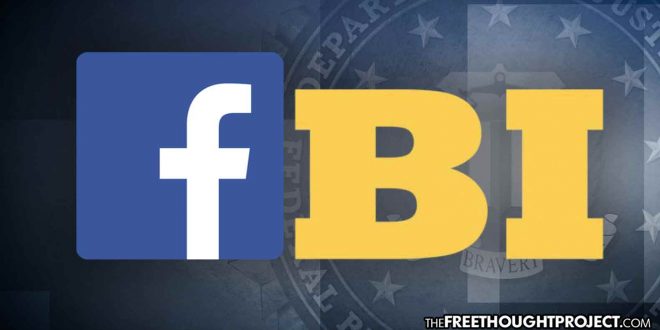 Despite decrying censorship when it was happening to them last year, when Donald Trump was banned from Twitter and Facebook earlier this month, the left praised the move by big tech. “Facebook is a private company and can do what they want,” the pro-censorship hypocritical crowd chanted ad nauseum through the digital ether after bad orange man was silenced. But as we have said time and again, Facebook being private is simply not true. Now, however, Facebook has made an unscrupulous Faustian bargain with the federal government which should eliminate all doubt once and for all. They are now willfully handing over private messages of Trump supporters who talked about the events at the capitol on January 6.

Google, Apple, and Amazon all moved to wipe the pro-Trump social media network Parler from the internet earlier this month because of what users on the platform discussed. It was alleged that the handful of dolts who stormed the capitol on January 6 had solely used Parler to plan their laughable, unarmed, silly, unsuccessful, and pitiful attempt to keep Trump in the White House.

Despite the ragtag group of Trumpians posing for selfies, photo-ops, and hanging from banisters, the only thing they accomplished was having D.C. turned into a scene akin to North Korea for Biden’s inauguration. Most honest experts in the media have acknowledged that though a few members of the mob thought they were part of some historic coup to keep their leader in power, the idea that they had any real chance at an insurrection was misleading at best and sheer propaganda used to further the domestic police and surveillance state at worst.

Deferring all responsibility for the planning of the raid on the capitol, Facebook chief operating officer Sheryl Sandberg had stated shortly after the incident that the protests were largely organized off Facebook. However, she was not telling the truth, and likely knew that large portions of the pro-Trump protests were talked about and organized on Facebook. But was Facebook wiped off the internet like Parler? No, no it was not. Here’s why.

This week, Facebook began furnishing the Federal Bureau of Investigation with data on Trump supporters who discussed the events at the capitol on their platform — up to and including their private messages. Through this action the social media giant is acting as a de facto intelligence collecting arm of the US government.

In contrast, when Syed Farook, otherwise known as the San Bernardino mass shooter, wouldn’t unlock his iPhone for the feds, Apple refused to create a backdoor for them to access it acting as an actual private company supporting the privacy rights of its customers. But Facebook is more than willing to open up its data mining services for their friends in the federal government — because, as we have stated numerous times, Facebook is not private.

As TFTP reported in 2018, Facebook announced that it partnered with the arm of the government-funded Atlantic Council, known as the Digital Forensic Research Lab that was brought on to help the social media behemoth with “real-time insights and updates on emerging threats and disinformation campaigns from around the world.”

The Atlantic Council is the group that NATO uses to whitewash wars and foster hatred toward Russia, which in turn allows them to continue to justify themselves. It’s funded by arms manufacturers like Raytheon, Lockheed Martin, and Boeing. It is also funded by billionaire oligarchs like the Ukraine’s Victor Pinchuk and Saudi billionaire Bahaa Hariri.

The list goes on. The highly unethical HSBC group — who has been caught numerous times laundering money for cartels and terrorists — is listed as one of their top donors. They are also funded by the pharmaceutical industry, Google, Goldman Sachs and others. However, the funding that comes from the United States, the US Army, and the Airforce directly negates the “private” aspect of the partnership.

The “think tank” Facebook partnered with to make decisions on who they censor is directly funded by multiple state actors — including the United States — which voids any and all claims that Facebook is a wholly “private actor.”

The Atlantic Council wields massive influence over mainstream media too, which is why when this partnership was announced, no one in the mainstream press pointed it out as the Orwellian idea that it is. Instead, headlines such as “US think tank’s tiny lab helps Facebook battle fake social media(Reuters)” and “Facebook partners with Atlantic Council to improve election security (The Hill)” were put out to spin the fact that a NATO propaganda arm is now censoring the information Americans see on Facebook.

But this partnership with the state-funded “think tank” is not the only reason Facebook is not private.

From government funded censorship arms to the revolving door of high level bureaucrats who fill the ranks of the oligopolies, the “private company” Facebook concept comes crashing down when taking a closer look. Private-sector firms do not need to be explicitly nationalized to further the establishment’s interests; it’s enough to install their alumni in top regulatory positions. Through these methods, Facebook can put on the façade of privatization while actually acting as deputies for the state but alleviating any constitutional checks in the process.

All the while, whenever the censorship acts in their benefit, half of the masses cheer it on and defend it, keeping resistance at a minimum.

What’s more, as the government hangs the threat of antitrust litigation over their heads, it can force these companies to act in their benefit even without explicit partnerships like that of the Atlantic Council. In fact, prior to the state getting involved in the talks of regulation into big tech, information flowed relatively freely with Facebook only removing racist and violent content. Now, however, as they bend to the will of their partners in the federal government, people like myself find ourselves on 30 day bans for saying “censorship leads to tyranny.”

This is why the answer to the government big tech censorship leviathan lies not in regulation but in boycott. The time is now to get off these platforms who spy on you, ban you, sell you to the highest bidder, and who are tearing society apart. Censorship free platforms exist and are far more user friendly and treat you as the actual customer instead of the sheep they are leading to slaughter. You can check them out here.