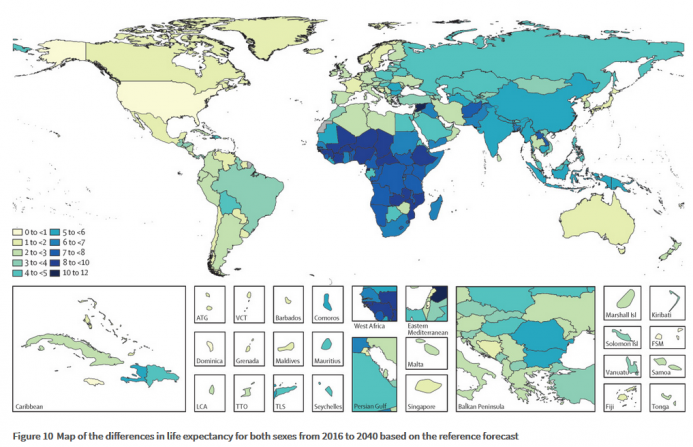 According to a recent report from the Centers for Disease Control (“Mortality in the United States, 2017“), “Life expectancy for the U.S. population declined to 78.6 years in 2017.”

If accurate, a decline in life expectancy is a cause for concern because, since the mid nineteenth century, we’ve come to expect life expectancy in Europe and the Americas to increase at least slightly each year.

Americans, it seems are falling victim to their own material abundance. Easy access to painkillers and recreational drugs has increased deaths due to drug addiction. And obesity is the cause of a multitude of chronic conditions that are sending many Americans to an early grave.

The American life expectancy trend does not reflect global trends, however.

Worldwide, the evidence continues to point toward rising life expectancy in most of the world, with the biggest gains in the poorest countries.

According to data compiled by the World Bank, life expectancy continues to grow the fastest in Africa. During the ten-year period from 2007 to 2016, the largest gains were realized in Zimbabwe, Eswatini (formerly Swaziland), Botswana, Malawi, and South Africa. The gains in years ranged from 13 years over the period in Zimbabwe to nearly 10 years in South Africa. Wealthy and mid-level countries saw gains during this period as well, including Switzerland and Mexico, where life expectancy increased 1.1 years and 1.4 years, respectively.

Indeed, the continued gains should surprise no one who keeps up with global trends in health. Globally, access to sanitation and clean water has improved substantially while extreme poverty, malnourishment, and child mortality have all declined. This has especially been the case in Sub-Saharan Africa and Southern Asia, where some of the worst poverty can be found.

Why the Climate-Change Panic?

Oddly, however, you won’t hear much about this in the context of the climate change debate.

For years — as life expectancy numbers have continued to rise — pundits and researchers have repeatedly attempted to claim that climate change has led to — or will soon lead to — declines in overall life and health.

The research has pointed out any number of possible causes of additional mortality, whether they betemperature extremes or natural disasters. Last month, CNN used data from a Lancet report to promote anornate and unconvincing theory that obesity and climate change are intimately related.

Moreover, The New Republic announced in 2015 that climate change “devastates food security, nutrition, and water safety.” Yet, the data shows that none of these things have been in any way “devastated” over the past decade. In fact, the indicators are all better now than where they were ten years ago.1

This hasn’t stopped researches from trying to connect a myriad of health problems directly to climate change. The New Republic continues:

But how do they arrive at these numbers? They’re achieved by claiming a variety of diseases are indirectlycaused by climate change. Given that most mortality is now caused by diseases such as diabetes, cardiovascular disease, liver failure and other chronic conditions, it’s chronic disease (and not factors directly connected to climate like heat stroke) that will be the most significant drivers in life expectancy. Thus, a solid connection must be made to diseases such as diabetes if climate-change can be held up as a leading cause of mortality.

But even if they could show the precise degree to which, say, cardiovascular disease can be blamed on climate change — which hasn’t been done — big numbers such as those used in the New Republic article don’t provide a picture of net mortality.2 That is, it’s easy to blame large numbers of deaths on climate change while ignoring the many ways that mortality rates and life expectancy are continually being improved in our industrialized fossil-fuel powered modern society.

For example, even The Lancet report predicted (in a report released in November of last year) “continued progress in improving life expectancy.” The biggest gains are to be found in poorer countries:

Needless to say, the usual narrative we hear isn’t to expect most of humanity to be living longer decades from now. The UN’s secretary general assures us that climate change is “the most systemic threat to humankind,” and President Obama concluded nothing “poses a greater threat to future generations” than clamate change. Congresswoman Alexandria Ocasio-Cortez has predicted “the world is going to end in twelve years” due to climate change. But, at the same time that we’re told global temperatures are already at catastrophic levels, we’re also told the net gain in life expectancy continues to be positive well into the future. Where we do see life expectancy declining — as in the United States — we see it due primarily to drug addiction and an inability to cut back on cheeseburgers.

The very factors that are blamed for climate change — such as a the high productivity levels and growing standards of living made possible by an industrialized modern society — are the very things that also improvelife expectancy: greater access to insulated housing, air conditioning, heating, medical care, medical research, water treatment, and refrigeration, are all enhanced by modern industrial economies.

Taking steps to greatly increase the cost of these resources and amenities — as carbon taxes and other anti-climate change regulations do — would only pull the rug out from under current efforts to continually fight against countless causes of mortality such as water borne diseases, cancer, and diabetes.

Admittedly, significant changes in food availability have some of the highest potential for significantly impacting life expectancy predictions. But if this occurs, it would then be necessary to connect food availability to climate change itself. After all, malnutrition issues in Africa are heavily impacted by economic and political problems caused by governments — such as civil wars and dysfunctional economies. Clearly, it would be nonsensical to point to the current situation in Venezuela and claim the current shortages there are significantly due to a climate-change problem. It’s not enough to point out there are malnutrition problems. It’s also necessary to show the exact extent to which climate change has been a significant driver.

Natural Disasters Are Not a Significant Cause of Growth in Mortality

Nor can much of a case be made for claims that climate change causes more deadly natural disasters.

The media has attempted to create the picture that climate-change-related natural disasters are worse than ever, but this case can only be made in terms of dollar amounts. This is because, at least in wealthy parts of the world, people are putting more expensive cars, homes, and other amenities in harm’s way. A street full of flood-ruined automobiles is far more expensive today than in the past.

In most of the world, though, the cost of climate-change-related natural disasters is much lower — in terms of human life — than in the past. The evidence points toward sizable declines in deaths due to natural disasters:

This should not be surprising since modern economies and higher standards of living make it easier for populations to take shelter and get out of harm’s way. Vehicles and equipment needed for medical triage are more readily available, and there is greater surplus wealth to deal with large temporary relocations of populations.

The Lancet report also notes that natural-disaster related deaths are unlikely to be relevant to life expectancy predictions:

Predicted impacts in other studies on extreme weather-related deaths and heat wave deaths are not large enough to have much impact on global life expectancy.

So, while journalists like to talk about how many people climate change will supposedly kill this year, the fact remains that the net gains in life expectancy continue to be positive. In response to this, of course, advocates for carbon taxes and other climate-related regulations would likely argue that life expectancy would increase even faster were it not for global warming. There are at least two problems with this claim. First of all, it neglects the fact that gains in life expectancy in recent decades are primarily a result of our fossil-fuel enabled modern economies. So, those who want to rein in economic activity in the name of climate-improvement would be destroying the very thing that’s improved the quality of life for billions already. Second, the anti-climate-change research would have to show that carbon taxes and similar policies will both reduce climate-change and increase access to better medical care, housing, and clean water. This has certainly not been done. In fact, as Robert Murphy has noted, we have every reason to believe the costs of implementation of anti-climate change regimes will be very high.