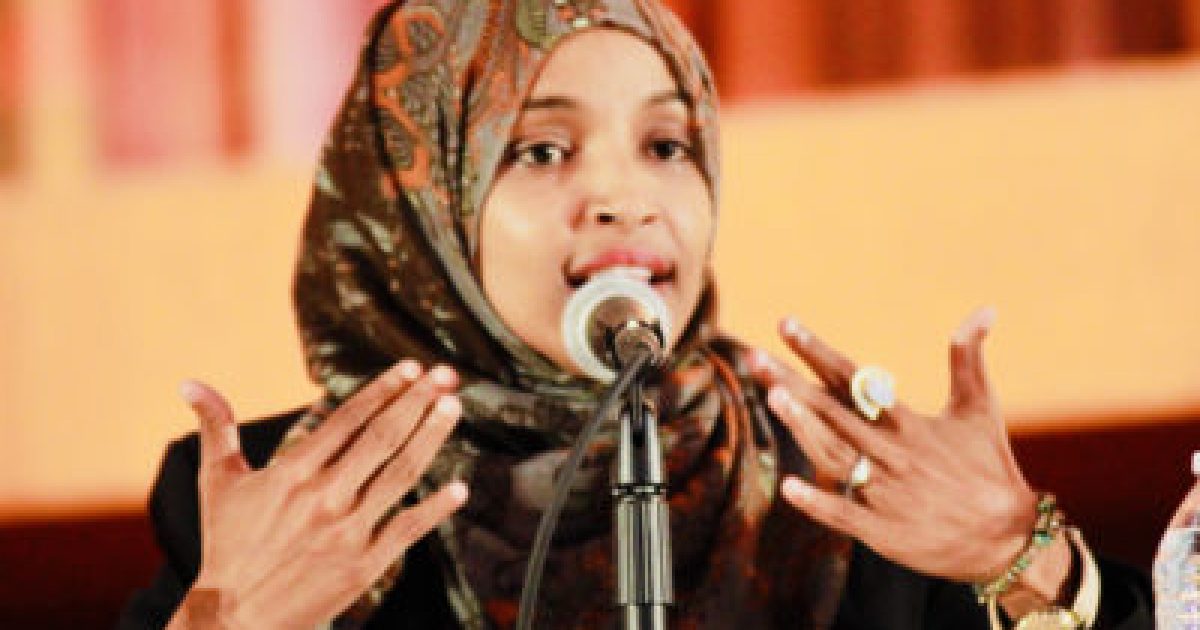 Central to the controversy surrounding the anti-Semitic and disparaging remarks about Jews and Israel made by the newly elected (some argue, fraudulently) Somali-born Congresswoman from Minnesota, Ilhan Omar, is the distinction between two laws: Islamic law and the U.S. Constitution.

It is unlikely that Omar would present a history of making such claims if she were not an adherent of Islamic ideology rooted in the Qur’an. The Qur’an is the basis for Islamic law, just as the U.S. Constitution is the basis for U.S. law.

A petition on Change.org has more than 178,891 signatures calling for Omar’s removal as of Feb. 19; the number has grown by more than 10,000 signatures daily. Another petition demands Omar be censured for her “repeated history of false, derogatory and hateful communications that go well beyond the bounds of acceptable discourse….”

Still, others are calling for her removal from office altogether. Brigitte Gabriel, founder of Act for America, a grassroots organization exposing Sharia law in America, said, “Ilhan Omar is a danger to our nation’s national security. She married her brother to commit immigration fraud. She has allegiance/ties to terrorist groups that have declared war on the United States. She has clearly proven to be a raging anti-Semite.”

In the U.S., it is legal to hate Jews and be anti-Semitic. One’s belief is not a crime. But hate crimes are.

The critical distinction is that the Qur’an, and therefore Islamic law, instructs its followers in more than 100 verses to wage war and commit violence against non-Muslims. The U.S. Constitution does not.

The underlying impetus for Omar’s claims appears to be rooted in Shari’a law—which means submission to the law of the Qur’an. Because Omar self-identifies as a Muslim, and by the very definition of Islam, it appears that her allegiance to the Qur’an outweighs any allegiance she may have claimed to make to the U.S. Constitution.

Australian Imam Mohamad Tawhidi hinted at this in his response to Omar’s disparaging statements about President Trump. Tawhidi said, “Amazing what time can do. Little girl from the deserts of Somalia speaking like that to the President of the United States. If you had tweeted that to President Farmajo of Somalia, he would have applied Sharia Law onto you; the law you cherish so much. Behave yourself, guest.”

In my forthcoming book, “What Christians in America Should Know About Islam,” one third of the book defines Islamic jurisprudence, which includes Jew-hatred.

The Qur’an refers to Jews as “apes, despised and hated.” (Surah 2:65; 7:166) Jews are “worse than [transgressors] in retribution… and whom Allah has cursed and brought His wrath upon, and of whom He made apes and swine, … and serve Shaitan (Satan).” (Surah 5:60)

The Qur’an instructs its followers: “O you who believe! do not take not the Jews and the Christians for friends,” whom the Qur’an describes are “unjust people.” (Surah 5:51; see also 57ff)

These examples exclude the more than 100 commands to commit violence against and murder non-Muslims.

The Middle East Media Research Institute (MEMRI) has translated into English and published hundreds of expositions Islamic leaders have given about Jews.

“One of the most amazing things I have read is that Hitler said: ‘I could have annihilated all the Jews of the world, but I left some of them, so that you would understand why I did this to them.’ Hitler was right to say what he said and to do what he did to the Jews.”

Sheikh Bassam Al-Kayed, the Head of the Association of Palestinian Islamic Scholars said on Hamas’ official television station, an organization Omar supports, “The Jew is a Satan in human form. Allah inflicted the Jews upon humanity in its entirety, and especially upon the nation of Islam, including the early prophets and the Prophet Muhammad.”

In Houston a few months ago, Raed Saleh Al-Rousan, of the Tajweed Institute, a Florida-based Islamic organization, said Muslims will kill Jews on Judgment Day. MEMRI translated and published his remarks, which garnered international attention. In response, Gilad Katz, the Israeli Consul General for six states including Texas, said, “We should not be tolerant towards hatred. Hatred should be met with a very strong fist of the law, and should be dealt with seriously.”

But Al-Rousan was likely referencing well-known texts in the hadith, which are volumes of transcribed instructions and testimony from Muhammad’s followers. Combined as the Sunnah, the hadith are considered second to the Qur’an when discerning Islamic law.

Unlike the Qur’an and the hadith, the U.S. Constitution was created to protect the inalienable rights of U.S. citizens, including freedom of speech specified in the First Amendment. The First Amendment does not protect hate speech, and hate crimes are felonies investigated and reported on by the FBI.

The FBI defines a hate crime as a “criminal offense against a person or property motivated in whole or in part by an offender’s bias against a race, religion, disability, sexual orientation, ethnicity, gender, or gender identity.” The FBI notes that hate itself is not a crime. Hate crimes, depending on the severity, carry sentences of ten years to life in prison, and death, depending on the state where the crime was committed.

The FBI’s Uniform Crime Reporting Program (UCRP) began collecting hate crime data in 2011, and added race and ethnicity data in 2013. Since 2013, it reports that more than fifty percent of the victims of anti-religious hate crimes in the U.S. are Jews.

In 2014, the first year the UCRP published data, there were 1,140 victims of anti-religious hate crimes reported in the U.S. Of them, “56.8 percent were victims of crimes motivated by their offenders’ anti-Jewish bias.”

In 2015 this number increased to 1,402 victims of anti-religious hate crimes, of which “52.1 percent were victims of crimes motivated by their offenders’ anti-Jewish bias.”

In 2016 (the latest data available), the number increased to 1,584 victims of anti-religious hate crimes, of which “54.4 percent were victims of crimes motivated by their offenders’ anti-Jewish bias.”

Whether or not any remarks Omar has made (or will make) are deemed as hate speech remains to be seen.

What should be acknowledged is that the Qur’an appears to legalize hatred of specific people groups. It is also a crime to contradict Qur’anic law under apostasy and blasphemy laws. The Pew Research Center reports that 90 percent of Middle East and North African Islamic countries criminalize blasphemy; 70 percent criminalize apostasy. Somalia criminalizes both.

Fortunately, Islamic law according to the Qur’an has no legal standing in the U.S. As long as the U.S. Constitution remains the harbinger of freedom, Jews who remain the most targeted victims of anti-religious hate crimes in America, will be defended and protected.