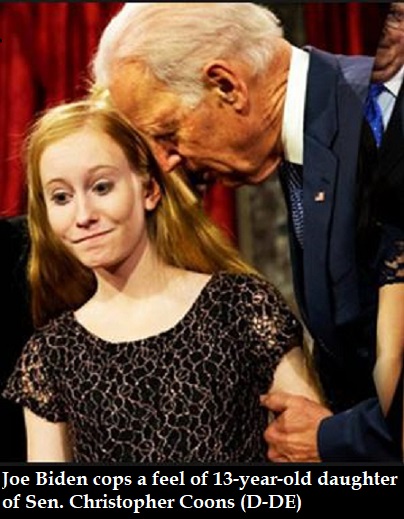 This post first appeared at Fellowship of the Minds, September 2016

A video has surfaced on YouTube — a snippet from C-SPAN footage of the ceremonial swearing-in of Senator Christopher Coons (D-Delaware) in January 2015, wherein Coons and his family had their picture taken with VP Joe Biden, who was 72 years old at the time.

Coons is the half-bald guy standing next to Biden and Mrs. Coons, the pretty blonde woman wearing a gold necklace.

UPDATE (Sept. 17, 2016): As you can see, incredibly, the video above is already removed by YouTube although I had viewed and uploaded it to this post yesterday evening, mere hours ago. Fortunately, what was in the removed video — of Biden’s interactions with Senator Coons’ 13-year-old daughter — is included in the longer video below, beginning at the 3:33 mark.

Senator Coon’s 13-year-old daughter, Maggie, initially stood third from the left, but her mother beckons her to move to the center.

As the girl walks to the center, Biden reaches out with his left hand, grabs the girl’s arm, pulls her to him, and quickly “cops a feel” by putting his hand on her torso.

Here’s a screenshot I took at the 0:10 mark of the (now deleted) video. I painted a yellow circle around Biden’s hand.

Biden then moves his hand away from the girl, but right before he drops his hand to his side, he quickly touches either the girl or himself (0:12 mark).

After posing for the photographers, at the 0:33 mark, Biden again grabs hold of the girl’s upper left arm, bends down and whispers in her ear. I can’t make out what he said, but according to the (now removed) video and commentators on its YouTube site who magnified the sound on their computers, Biden said:

At that point, the mother quickly turns her face to the side, away from the camera, while the girl has a shocked look on her face. In an article for the Daily Mail on Jan. 12, 2015, reporters Simon Tomlinson and Ashley Collman observed that the girl “did not seem enthused by what he [Biden] had to say.”

“Talk to my daughter, Ashley, about the film.”

Biden then forces a kiss on the girl, but she recoils from him. He laughs, “He, he, he,” straightens himself up while still holding the girl’s arm, and says:

Asked about Biden trying to kiss his daughter, Sen. Coons defended Biden. He told Fox News Sunday that his daughter “doesn’t think the vice president is creepy,” and that Biden was simply leaning forward to offer her support. Coons said: “I could hear him. He was whispering some encouragement to her about how when he was sworn in and his own daughter Ashley was 13 and she felt awkward and uncomfortable and he was encouraging her about how to get through a day with lots of cameras and lots of folks watching. He was being Joe. He’s known my kids their whole lives. He was being thoughtful and he was being sweet.”

According to a timeline by the Associated Press, Biden was first elected to the U.S. Senate in 1972 and sworn in on Jan. 5, 1973, 8 years before Ashley was born.

All of which means either Biden or Sen. Coons lied about Biden whispering encouragement to Maggie Coons because Ashley Biden was also 13 and felt awkward and uncomfortable when Biden was sworn in.

A longer video (below) shows Biden’s interactions with Maggie Coons which were in the video that I posted above and which YouTube deleted. That segment begins at around the 3:33 mark. The longer video below also shows Biden touching, hugging, and groping other girls at the swearing-in ceremonies of senators, including:

There is also photographic evidence of Biden engaged in inappropriate touchy-feely behaviors, including having a biker chick sit on his lap, and placing his hand on the thigh of a male trooper.

In today’s age of pedophiles on the prowl and sexual harassment lawsuits, it is astonishing to say the least that Joe Biden, an adult male in his 70s, feels free to behave the way he does — touching, groping and kissing young girls who are strangers. And he does it brazenly, in front of cameras and the girls’ parents.

But not a thing is done about it because he is “Uncle Joe,” the Vice President of the dysfunctional U.S.A.

If it were anyone else, Joe Biden would be designated a dirty old man, and arrested.