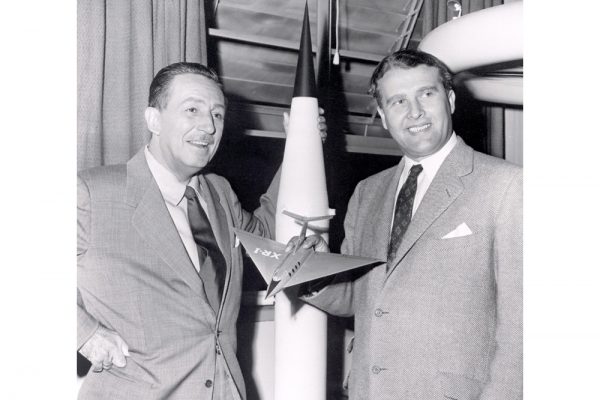 Take off the Mouse ears. It’s okay to say goodbye to Mickey. The Walt Disney who interviewed Wenhrner Von Braun in the 1950s, compelling America to go to the stars, is dead.

Where once the heavens were the goal of Walt Disney, now his namesake is entirely dedicated to the advancement of anti-whiteness in every aspect of our lives. [The Wokest Place on Earth: Disney mounts an internal campaign against “white privilege” and organizes racially segregated “affinity groups.”, City Journal, May 7, 2021]:

The Walt Disney Corporation famously bills its amusement parks as “the happiest place on Earth,” but inside the company’s headquarters in Burbank, California, a conflict is brewing. In the past year, Disney executives have elevated the ideology of critical race theory into a new corporate dogma, bombarded employees with trainings on “systemic racism,” “white privilege,” “white fragility,” and “white saviors,” and launched racially segregated “affinity groups” at the company’s headquarters.

I have obtained a trove of whistleblower documents related to Disney’s “diversity and inclusion” program, called “Reimagine Tomorrow,” which paints a disturbing picture of the company’s embrace of racial politics. Multiple Disney employees, who requested anonymity out of fear of reprisals, told me that the Reimagine Tomorrow program, though perhaps noble in intent, has become deeply politicized and engulfed parts of the company in racial conflict.

The core of Disney’s racial program is a series of training modules on “antiracism.” In one, called “Allyship for Race Consciousness,” the company tells employees that they must “take ownership of educating [themselves] about structural anti-Black racism” and that they should “not rely on [their] Black colleagues to educate [them],” because it is “emotionally taxing.” The United States, the document claims, has a “long history of systemic racism and transphobia,” and white employees, in particular, must “work through feelings of guilt, shame, and defensiveness to understand what is beneath them and what needs to be healed.” Disney recommends that employees atone by “challeng[ing] colorblind ideologies and rhetoric” such as “All Lives Matter” and “I don’t see color”; they must “listen with empathy [to] Black colleagues” and must “not question or debate Black colleagues’ lived experience.”

In another module, called “What Can I Do About Racism?,” Disney tells employees that they should reject “equality,” with a focus on “equal treatment and access to opportunities,” and instead strive for “equity,” with a focus on “the equality of outcome.” The training also includes a series of lessons on “implicit biases,” “microaggressions,” and “becoming an antiracist.” The company tells employees that they must “reflect” on America’s “racist infrastructure” and “think carefully about whether or not your wealth, income, treatment by the criminal justice system, employment, access to housing, health care, political power, and education might be different if you were of a different race.”

In order to put these ideas into action, Disney sponsored the creation of the “21-Day Racial Equity and Social Justice Challenge” in partnership with the YWCA and included the program in its recommended resources for employees. The challenge begins with information on “systemic racism” and asks participants to accept that they have “all been raised in a society that elevates white culture over others.” Participants then learn about their “white privilege” and are asked to fill out a white privilege “checklist,” with options including: “I am white,” I am heterosexual,” “I am a man,” “I still identity as the gender I was born in,” “I have never been raped,” “I don’t rely on public transportation,” and “I have never been called a terrorist.”

Next, participants learn about “white fragility” and are asked to complete an exercise called “How to Tell If You Have White Fragility.” The program interprets beliefs such as “I am a good person, I can’t be racist” and “I was taught to treat everyone the same” as evidence of the participant’s internalized racism and white fragility. Finally, at the conclusion of the 21-day challenge, participants are told that they must learn how to “pivot” from “white dominant culture” to “something different.” The document claims that “competition,” power hoarding,” “comfort with predominantly white leadership,” “individualism,” “timeliness,” and “comprehensiveness” are “white dominant” values that “perpetuate white supremacy culture”—and must be rejected.

In the same collection of resources, Disney also recommends that employees read a series of how-to guides, including “75 Things White People Can Do for Racial Justice” and “Your Kids Are Not Too Young to Talk About Race.” The first article suggests that white employees should “defund the police,” “participate in reparations,” “decolonize your bookshelf,” “don’t gentrify neighborhoods,” “find and join a local ‘white space,’” and “donate to anti-white supremacy work such as your local Black Lives Matter Chapter.” The second article encourages parents to commit to “raising race-consciousness in children” and argues that “even babies discriminate” against members of other races. A graphic claims that babies show the first signs of racism at three months old, and that white children become “strongly biased in favor whiteness” by age four.

We had a shot at something unprecedented in human history, but allowed guilt to outweigh our desire for tomorrow. Anti-white guilt.

Walt Disney went from giving Von Braun a platform to promoting the heavens to Critical Race Theory (CRT) in the span of 60 years, where once whiteness promoted a view of space exploration to where anti-whiteness negated all hope of a better tomorrow because white people dared believe a better tomorrow existing at the expense of what non-whites could create in the absence of white people.