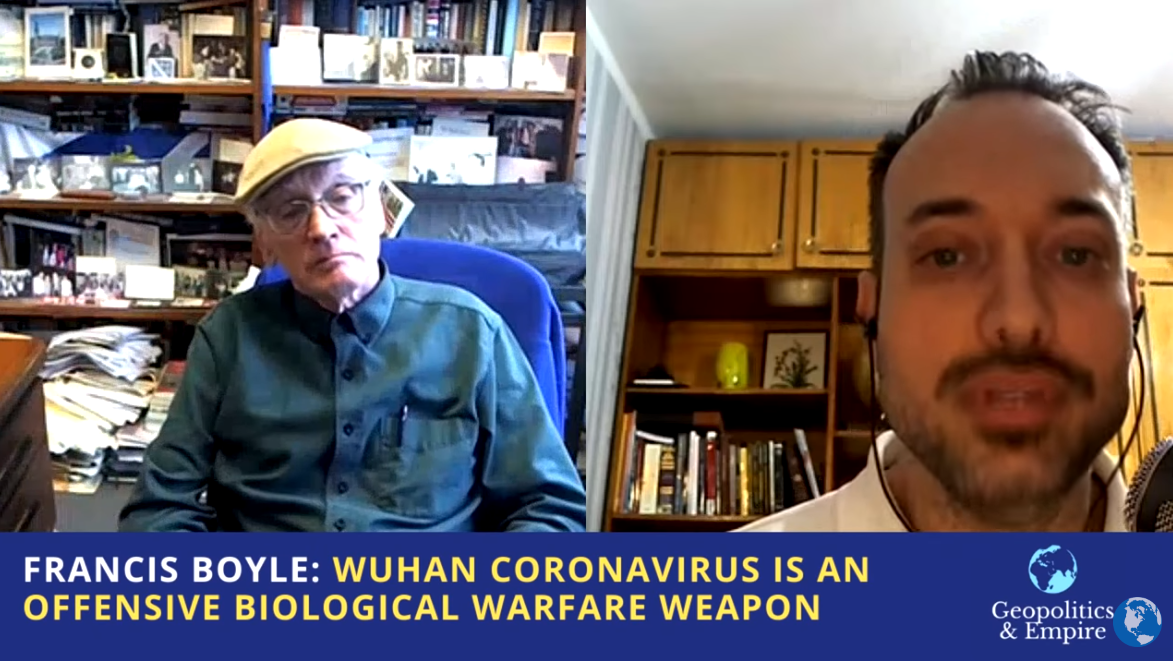 (Natural News) Dr. Francis Boyle is perhaps best known for authoring the Biological Weapons Act. In an explosive interview with Geopolitics and Empire, shown below, Dr. Boyle reveals that the coronavirus now circulating in the wild, exploding as a pandemic, is indeed an “offensive biological warfare weapon.”

In this eye-opening interview, probably soon to be banned by YouTube, Dr. Boyle plainly confirms exactly what Natural News has been reporting for over a week now: that the coronavirus is a biological weapon system which escaped the Wuhan BSL-4 laboratory and broke containment in the local population, spreading uncontrollably.

In his own words, he says, “the coronavirus that we’re dealing with here is an offensive biological warfare weapon that leaked out of that Wuhan BSL-4 [lab].”

This further confirms the proof that the coronavirus was genetically engineered using the pShuttle vector tool that’s commonly known and used by virology researchers. It also ties into the fact that independent genomics researchers have also confirmed the coronavirus has been subjected to SARS gene insertions as part of the weaponization program.

The mounting evidence of a laboratory origin is now irrefutable, yet the WHO is covering for China’s bioweapons program and trying to lie to the world about the origins of the virus, falsely claiming it came about from random permutations in the wild.

Here’s more of the transcript from the interview with Dr. Boyle, which was originally posted on the Geopolitics & Empire channel on YouTube.

It does seem to me that the Wuhan BSL-4 is the source of the coronavirus, yes. My guess is that they were researching SARS, and they weaponized it further by giving it gain-of-function properties, which means it could be more lethal, and indeed the latest report now is it’s 15% fatality rate which is more than SARS, and 83% infection rate. So a typical gain-of-function is it travels in the air, so it could reach out maybe six feet or more from someone emitting a sneeze or a cough. Likewise, this is a specially designated WHO research lab, so the WHO is in on it, and they knew full well what was going on there.

Yes, it’s also reported the Chinese stole coronavirus materials from the Canadian lab at Winnipeg; Winnipeg is Canada’s foremost center for research developing and testing biological warfare weapons. It’s along the lines of Ft. Detrick in the USA, and yeah, I have three degrees from Harvard, it would not surprise me if something was being stolen out of Harvard to turn over to China… the bottom line is, …and I drafted the U.S. domestic implementing legislation for the biological weapons convention, that was approved unanimously by both houses of the U.S. Congress and signed into law by President Bush, Senior, that it appears the coronavirus that we’re dealing with here is an offensive biological warfare weapon that leaked out of that Wuhan BSL-4 [lab]. I’m not saying it was done deliberately, but there have been previous reports of problems with that lab and things leaking out of it, and I’m afraid that is what we are dealing with today. (emphasis added)

The full video is posted at YouTube at the moment, but is likely to be banned:

The “newsclips” channel has cross-posted the video on Brighteon in case YouTube bans it. This is too important to allow to be censored. We hope the journalists at Geopolitics & Empire — who produce an amazing assortment of podcasts and other materials — understand why it’s important to post this interview everywhere before the tech giants can extinguish it. All credit goes to Geopolitics & Empire, and we hope you will visit their podcast site to listen to their own fascinating interviews.

Geopolitics & Empire also has a channel on Brighteon.com, but so far they have not posted this interview. If they post it, we will update the following link to their channel.

“Dr. Boyle’s position is in stark contrast to the mainstream media’s narrative of the virus being originated from the seafood market, which is increasingly being questioned by many experts,” reports GreatGameIndia.com, an independent news website that has also been subjected to aggressive cyber attacks after it began publishing information about the coronavirus pandemic (Natural News was also subjected to an extremely well-funded cyber takedown attack that disrupted our publishing operations for 2-3 days.)

the mainstream media’s narrative still maintains that the origin of the 2019 Coronavirus is the Wuhan Seafood Market. After GreatGameIndia published the story on Coronavirus Bioweapon – not only were our databse tinkered with and our reports blocked by Facebook on the flimsy reason that they could not find GreatGameIndia Facebook page, but the report itself was viciously attacked by Foreign Policy magazine, PolitiFact (known widely as Facebook’s propaganda arm) and BuzzFeedNews.

The coronavirus biological weapon development program was part of China’s long-admitted effort to weaponize viruses and wipe out the USA by deploying them on U.S. soil.

“We are not as foolish as to want to perish together with America by using nuclear weapons,” said the general. “Only by using non-destructive weapons that can kill many people will we be able to reserve America for ourselves.” The answer is found in biological weapons. “Of course,” he added, “we have not been idle, in the past years we have seized the opportunity to master weapons of this kind.”

“In the long run,” said Gen. Chi, “the relationship of China and the United States is one of a life-and-death struggle.” This tragic situation must be accepted. According to Gen. Chi, “We must not forget that the history of our civilization repeatedly has taught us that one mountain does not allow two tigers to live together.”

According to Gen. Chi, China’s overpopulation problem and environmental degradation will eventually result in social collapse and civil war. General Chi estimated that “more than 800 million” Chinese would die in such a collapse. Therefore, the Chinese Communist Party has no policy alternative.

Either the United States is “cleaned up” by biological attacks, or China suffers national catastrophe.

In other words, China has been building a biological weapon to destroy the United States, and that weapon got loose in their own back yard. Now, it looks like China may have just nuked itself with that very same bioweapon, and the fate of China’s population, industrial output and political leadership looks very much in doubt.

Perhaps it’s fitting that the coronavirus may be the vector by which China destroys itself before its treacherous philosophy of communism, tyranny and mass death infects the entire world.