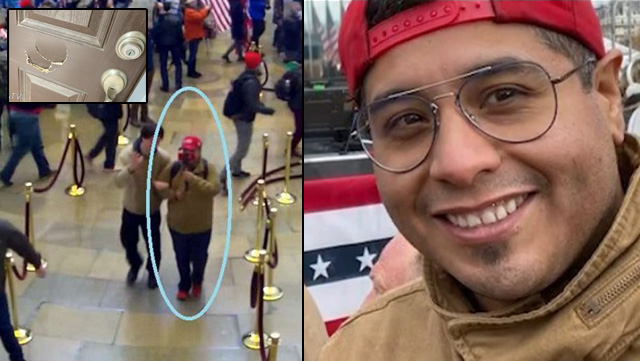 The feds’ indictment shows Montoya is being “charged with essentially being loud at the US Capitol on Jan. 6,” Infowars said.

“Thirty plus FBI agents and federal marshals showed up and knocked down his door with a battering ram,” Alex Jones reported.

Even HuffPost journo Ryan Reilly questioned the notion that every journalist who covered the event was somehow obligated to have a Congressional press pass.

"The director of the Congressional press galleries within the Senate Press office did a name check on Samuel Christopher Montoya and confirmed that no one by that name has Congressional press credentials as an individual or via any other organizations.” https://t.co/A3R3ONZrnq pic.twitter.com/7tH6XLHc2j

That’s a line that could get blurry in other cases. Not sure every single legitimate journalist who entered the Capitol necessarily had a congressional press pass.

At no point in the indictment is Montoya accused of attacking police or committing any acts of violence.

The main evidence against him is that he allegedly made a few comments over a 44 minute video criticizing the government.

Judging by the feds’ out-of-context transcriptions, it appears he wasn’t even in the Capitol building until the 12:55 mark and he was making statements encouraging everyone to be orderly and civil. The indictment even included this damning photo to prove Montoya entered the Capitol… featuring Montoya respectfully walking within the velvet ropes! The charges against him read like a sick joke: The overwhelming majority of the folks who entered the Capitol just walked right in past police who told them they “disagree” with them entering the building but “respect” their right to protest.

Capitol police open doors for the protestors. They stand aside and invite them inside. pic.twitter.com/OnSd3KGzz5

None of the elaborate measures taken to hunt down every last person who stepped foot in the Capitol were used to hunt down the violent Black Lives Matter rioters who caused some $2 billion in damages last year and are now rioting again in Minnesota night after night!

The FBI literally took a knee for them!

hile the Biden regime is busy throwing the book at Capitol protesters, they quietly offered a plea deal to the BLM lawyers who threw a Molotov cocktail at a police cruiser!

Capitol protesters are effectively being held in indefinite detention and their attorneys are reporting that DC correctional officers are subjecting them to vicious beatings and anti-White racial abuse!

This is purely vindictive political persecution which should shock and disturb every American!