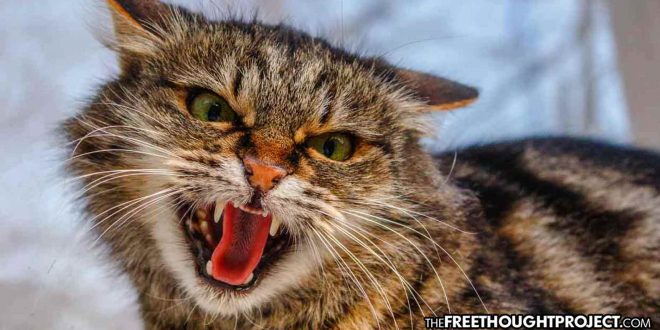 A Lincoln Park, Michigan man had to wait almost six years but a U.S. Court of Appeals overturned a lower court’s ruling that he could not sue police officers for illegal entry, wrongful arrest, and excessive force claims for shooting a BB Gun near a wild cat to scare it away for attacking his young daughter.

Dwain Barton’s nightmare started in November 2014 when the neighborhood’s crazy cat lady, Jill Porter, called police and falsely reported Barton had shot the cat in the head. Barton claimed in court documents Porter had been feeding the community’s stray cats so much and so often the homes in the area were overrun with as many as forty to fifty stray cats. On a November day in 2014, Barton said he observed one of Porter’s stray cats attacking his daughter, “clawing and biting at her.”

Grabbing a nearby BB gun, Barton then claims to have fired shots at the metal poles of their trampoline in order to scare the cat away from his daughter and their home. Both parents were at home with their child when the attack occurred while Barton was fixing a door on his home. Barton then had words with his cat-obsessed neighbor. He told her, “Jill (Porter), the next cat that I see in my yard will be a dead one.” Porter then picked up he phone and dialed 911 and told dispatchers Barton said the following: “just to inform you, your grey cat just peed on my furniture and he got shot in the head.” That false statement then resulted in a police officer with the animal control division being dispatched to the address.

When the cop arrived, Barton told him what happened with his daughter and how he tried to scare it away by shooting the trampoline pole to make a scary noise to get it to leave. Barton refused to provide any identifying information to Animal Control Officer Adam Manchester who put in his report a day after the incident Barton admitted to having shot animals before but indicated there was no gun, BB or otherwise near him when he made contact with Barton.

Manchester asked for backup and other police officers arrived. Moments later, eight police officers arrived in four cars, got AR-15’s out of the trunks of their cars, and surrounded Barton’s home. By this time, Barton was ready to identify himself and passed his ID to family members who were standing on the porch engaged with police.

Officer Dean Vann was one of the officers who arrived. That’s when Vann claims to have been in fear for his life. He wrote in his police report, “fearing that [Barton] was grabbing a gun,” Vann, “ripped [their] screen door off [and barged] into [their] house.” The officers were supposed to have obtained a search warrant but did not.

Barton told the courts Vann “lifted [him] up with his elbows underneath [his] body and [his] arm and literally picked [him] up and slammed [him] up against [the] kitchen cupboards, at which point all of the other officers, like ants, followed in, and at which point they all surrounded [him].” They then forced him outside and into a waiting squad car.

Officers told him that he was being charged with animal cruelty and issued a citation. Approximately three hours after his arrest, Barton was released on a $500 cash bond. The charge against him was later dismissed.

Barton then attempted to sue the officers involved for violating his civil rights. However, a lower Michigan court sided with the officers saying the officers had “qualified immunity” from prosecution. The U.S. 6th Circuit Court of Appeals overturned the lower court’s ruling this past week saying any reasonable jury would have sided with Barton.

First, the court said, there was no evidence any crime had been committed. There was no blood evidence and no firearm was used by the homeowner for attempting to scare away the cat. The court also found Barton’s rights were violated when cops entered his home without a warrant for a crime for which there was, again, no evidence.

The appeals court also decided Barton has a right not to have excessive use of force imposed on him within his own home. When Vann threw Barton into the counter and cabinets and then threw him outside, those actions constituted an excessive use of force. The court pointed to the fact no weapon was found on his person and he was not a threat to cops or the community.

Also worth noting was the notion “qualified immunity” protected the officers in this case from being prosecuted. The court disagreed saying the officer would have to have been acting in a lawful manner in order to be able to claim qualified immunity. He was not. Therefore Barton is now allowed to sue the officers for what TFTP has long described as kidnapping and caging a citizen over a false information. The case will now go back to the lower court to be tried. We will keep you posted as this case progresses.