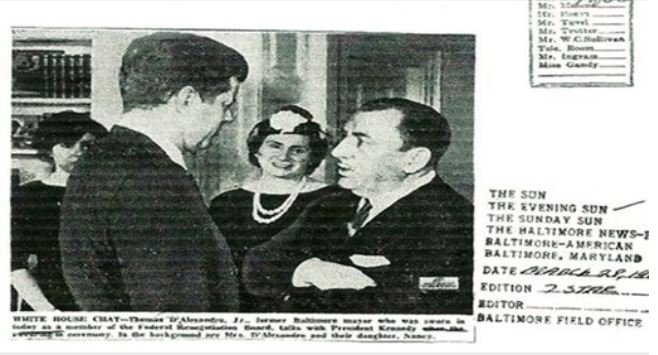 OPINION – By Brian Thomas at The Federalist Papers

Grandparents.com describes House Majority Leader Nancy Pelosi as a “Power Nana” who refers to herself in her family as “Grandma Mimi.” But Pelosi isn’t exactly an average grandma figure, considering her current corruption dates back to her upbringing in a politically charged environment heavily tied to the mafia.

Pelosi’s father, Thomas D’Alesandro Jr., was a close associate of the notorious mobster Benjamin “Benny Trotta” Magliono, as well as several other criminals.

Secret deals are nothing new for Pelosi.

Sure, she and her husband have gotten rich off taxpayer subsidies funneled through a light rail company, but backdoor deals and corrupt money has always been a part of her family history.

This “power Nanna” was raised in stinking corruption, and she’s followed the business of deceit to a tee.

From Friends of Ours:

Nancy Pelosi’s father Thomas D’Alesandro Jr. allegedly was a “constant companion” of notorious mobster Benjamin “Benny Trotta” Magliano and other underworld figures during his political years in Baltimore, MD. D’Alesandro was a Congressman for five terms from 1938 to 1947, and Baltimore mayor for three terms from 1947 to 1959. Magliano was identified by the FBI as one of Baltimore’s “top hoodlums,” and he widely was acknowledged as the representative for New York’s Frankie Carbo who made his bones with Murder, Inc. and later became a made guy in the Lucchese family. The allegations are included in D’Alesandro’s recently-released FBI files which Friends of Ours has obtained pursuant to the Freedom of Information Act.

In 1947 the FBI investigated Magliano for securing a draft exemption from Selective Service for himself and prize fighters he controlled by falsely representing they had essential employment at American Ship Cleaning Company which was operated by John Cataneo. In fact, Magliano and his boxers had no such employment, and they were convicted with Cataneo in federal court for their unpatriotic draft-dodging scam. Peter Galiano, one of the convicted boxers, told the FBI in January 1947 that “Thomas D’Alesandro was a constant companion of John Cataneo; Benjamin Magliano . . . and [redacted]”:

It was reported that these individuals had worked hard for Thomas D’Alesandro’s reelection to Congress and on his campaign at that time to become Mayor of Baltimore. It was stated that John Cataneo and Magliano during the time of this campaign were under Federal indictments for violation of the Selective Service Act and for fraud against the Government and were subsequently convicted in Federal court. Cataneo allegedly admitted giving large sums of money toward the Democratic campaign and stated that he would receive the sanitation contracts for Baltimore if Mr. D’Alesandro was elected mayor.

At that time the FBI never investigated D’Alesandro concerning this or numerous other allegations involving hoodlum associations and public corruption. Of course, while in Congress D’Alesandro sat on the appropriations committee and was a friend of Director J. Edgar Hoover. For example, an FBI memo dated March 27, 1946 from E. G. Fitch to D. M. Ladd provides:

Supervisor Orrin H. Bartlett advised me that while talking to Congressman Thomas D’Alesandro, Jr. (D., Md.) on March 26, 1946, the Congressman advised Agent Bartlett he was running for Congress again in the fall 1946 election and that in 1947 he was running for the office of Mayor of Baltimore. Congressman D’Alesandro advised Agent Bartlett that since he had been on the Appropriations Committee, he has been back of the Director and the Bureau one hundred percent, and further, that he was vitally interested in and completely satisfied with the results of the Bureau’s work.

Despite excuses from Hoover, allegations continued to pile up and President John F. Kennedy finally requested in 1961 that “D’Alesando’s involvement with Baltimore hoodlums; with favoritism in awarding city contracts; [and] protection for political contributors and the prosecution of local cases” be investigated.

According to Friends of Ours, Hoover advised the Baltimore and Washington Field Offices in a memo on a February 6, 1961, warning that investigations may show “substantial derogatory information” that would eliminate D’Alesandro’s chances of appointment to the US Renegotiation Board, a position President Kennedy wanted to give D’Alesandro.

The FBI inquiry was therefore vague and lasted only a couple months. Some witnesses, however, still alleged that D’Alesandro was a “constant companion” of Magliano and other mobsters, though further pressing was somehow avoided.

Others accused D’alesandro of protecting criminals and receiving kickbacks.

Don’t think for one minute though that “Grandma Mimi” escaped this hotbox of political corruption.

Scandal, in its current form, was in fact her inheritance.