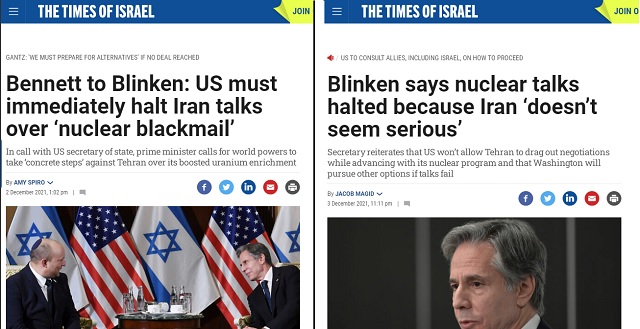 Israel stepped up its opposition to the Iran nuclear deal talks on Thursday and demanded that the US and other world powers put an immediate end to the negotiations.

Israeli Prime Minister Naftali Bennett delivered the message in a call with US Secretary of State Antony Blinken. “Iran is carrying out nuclear blackmail as a negotiating tactic, and this should be answered by the immediate halt to negotiations and the implementation of tough steps by the world powers,” Bennett said, according to a statement released by his office.

Israel claims that Iran has no intention of reducing its nuclear activity back to JCPOA levels and is only trying to buy time to develop a nuclear bomb. But there’s no evidence to support the claim, and Iran has only taken steps to advance its nuclear program in the face of pressure from the US and Israel, and a JCPOA revival would reverse those steps.

Iran has said Israel is spreading lies about Iran to “poison” the negotiations. When the talks first resumed Monday, Israeli media reported that Israel warned the US Tehran is about to enrich uranium to the 90 percent level needed for weapons-grade. But again, there was no evidence to back up the claim.

With the demands from Israeli officials to halt negotiations come threats. Israeli Defense Minister Benny Gantz said Thursday that attacking Iran must always be an option for Israel, even if the country has to act alone.

Israel has taken extreme measures to sabotage diplomacy between the US and Iran in the past. In April, when the first rounds of negotiations began, Israel carried out an attack on Iran’s Natanz Nuclear Facility. Tehran responded to the incident by starting to enrich some uranium at 60 percent, which Israel now claims is evidence the Iranians are racing towards a bomb.

United States Secretary of State Antony Blinken said Friday that this week’s round of negotiations between world powers and Iran in Vienna was halted because Tehran does not seem to be serious about reaching an agreement with the US that would see a joint return to compliance with the nuclear agreement.

“What we’ve seen in the last couple of days is that Iran right now does not seem to be serious about doing what’s necessary to return to compliance, which is why we ended this round of talks in Vienna,” Blinken told Reuters.

The secretary of state said the US would now consult with its allies, including Israel, on how best to move forward.