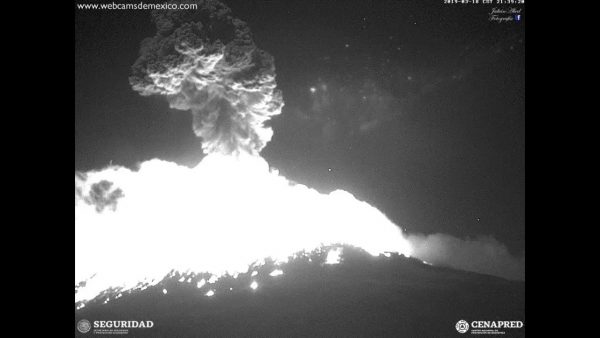 A lot of us have been watching Mt. Popocatepetl for a very long time. Could it be possible that we are now on the verge of the most destructive volcanic eruption in the modern history of North America? On Monday night at precisely 9:38 PM, a massive explosion at Mt. Popocatepetl sent a column of volcanic ash nearly a mile into the sky. A “yellow alert warning” has been issued by the authorities, and they are ordering everyone to stay at least 12 kilometers away from the crater. They are stressing that the threat has not passed, and as you will see below, an evacuation plan is in place in case an even larger eruption follows. And if a much larger eruption does follow, the devastation could be off the charts. Mexico City is only 43 miles away from Mt. Popocatepetl, and approximately 25 million people live within a 60 mile radius of the crater.

The explosion on Monday night was definitely a wake up call. According to media reports, it was “loud enough to shake doors and windows of houses in the city of Puebla”…

Mexico’s Popocatepetl volcano erupted late on Monday, hurling incandescent rock about 1.5 miles down its slopes and sending ash into the night sky near the nation’s capital.

The explosion, one of the volcano’s largest eruptions in years, was heard from nearby communities and was loud enough to shake doors and windows of houses in the city of Puebla, according to local media.

Mt. Popocatepetl has been increasingly active in recent months, and authorities are concerned that all of this activity could be leading up to something really big.

In fact, it is being reported that they are “currently preparing for the worst case scenarios”…

Local authorities are currently preparing for the worst case scenarios and haven’t ruled out more eruptions in the near future.

In preparations, they have drafted a special operational plan allowing for quick evacuation of locals in case of any future emergencies.

Popocatepetl exploded earlier this week but had remained calm over the past several days as it only emitted water vapour, gas and a small amount of ash.

So what would a “worst case scenario” for Mt. Popocatepetl look like?

Well, scientists tell us that the volcano is capable of producing a “catastrophic Plinian eruption”…

Popocatépetl is considered the most threatening volcano in North America, in terms of explosive activity and population threat. Its current low- or moderate-scale eruptive behavior can switch relatively quickly to a large, catastrophic Plinian eruption, the largest and most violent of all the types of volcanic eruptions, according to the volcanologists at the National History Museum.

If you have never heard of a “Plinian eruption” before, here is Wikipedia’s definition…

Plinian eruptions or Vesuvian eruptions are volcaniceruptions marked by their similarity to the eruption of Mount Vesuvius in 79 AD, which destroyed the ancient Roman cities of Herculaneum and Pompeii. The eruption was described in a letter written by Pliny the Younger, after the death of his uncle Pliny the Elder.

Plinian/Vesuvian eruptions are marked by columns of volcanic debris and hot gases ejected high into the stratosphere, the second layer of Earth’s atmosphere. The key characteristics are ejection of large amount of pumice and very powerful continuous gas-driven eruptions. According to the Volcanic Explosivity Index, Plinian eruptions have a VEI of 4, 5 or 6, sub-Plinian 3 or 4, and ultra-Plinian 6, 7 or 8.

Short eruptions can end in less than a day, but longer events can take several days or even months. The longer eruptions begin with production of clouds of volcanic ash, sometimes with pyroclastic surges. The amount of magma erupted can be so large that it depletes the magma chamber below, causing the top of the volcano to collapse, resulting in a caldera.

We are talking about a disaster that could potentially kill millions.

In the Aztec language, Popocatepetl literally means “smoking mountain”, but to most of the locals the volcano is simply known as “Don Goyo”. In ancient times, it produced giant tsunamis of super heated mud that completely buried entire Aztec cities. The following is an excerpt from one of my previous articles…

Historians tell us that Popocatepetl had a dramatic impact on the ancient Aztecs. Giant mud flows produced by massive eruptions covered entire Aztec cities. In fact, some of these mud flows were so large that they buried entire pyramids in super-heated mud.

But we haven’t witnessed anything like that in any of our lifetimes, so it is hard to even imagine devastation of that magnitude.

In addition to Mexico City’s mammoth population, there are millions of others that live in the surrounding region. Overall, there are about 25 million people that live in the immediate vicinity of Popocatepetl. Thankfully, we haven’t seen a major eruption of the volcano in modern times, but at some point that will change.

Considering what this volcano is capable of doing, I simply don’t understand why there was so little coverage of this massive explosion on Monday by the mainstream media in the United States.

I guess they didn’t have any room after allocating front page space to the powerball jackpot and the ongoing drama surrounding Wendy Williams.

We live at a time when our planet is becoming increasingly unstable, and many believe that the shaking is only going to get worse.

Mt. Popocatepetl had been dormant for a very long time before it started becoming active again in the 1990s.

Now it has apparently entered an extremely active phase, and we know that it is capable of producing a catastrophic Plinian eruption.

So let’s keep a very close eye on Mt. Popocatepetl, because a Plinian eruption so close to Mexico City would be a disaster far worse than anything that any of us have ever seen.