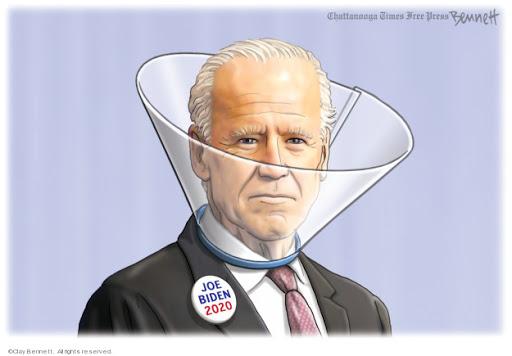 Can you imagine if any politician, let alone a presidential candidate, suggested we teach more Judaism or Christianity in the public schools? All hell would break loose.

Biden, the presumptive 2020 Democratic presidential nominee and two-term vice president, told Emgage Action’s Million Muslim Votes Summit that he would end President Trump’s “vile” travel ban targeting Muslim nations on the first day of his administration should he win the White House in 100 days on Nov. 3.

The 36-year Delaware senator added that he would work with Congress to pass anti-hate-crime legislation and reiterated his support of a two-state solution in the Middle East.

Several prominent Muslim American elected officials endorsed Joe Biden for president in a letter organized by Emgage Action ahead of an online summit that starts Monday and features the presumptive Democratic nominee.

Among those signing the letter, obtained by The Associated Press, are Minnesota Rep. Ilhan Omar, Minnesota Attorney General Keith Ellison and Indiana Rep. Andre Carson, all Democrats. Omar, one of the first Muslim women elected to Congress, served as a high-profile surrogate for Bernie Sanders before he exited the presidential race in April — making her support for Biden potentially helpful as the former vice president seeks to mobilize Muslim voters this fall.

Biden’s got the jihad caucus vote. 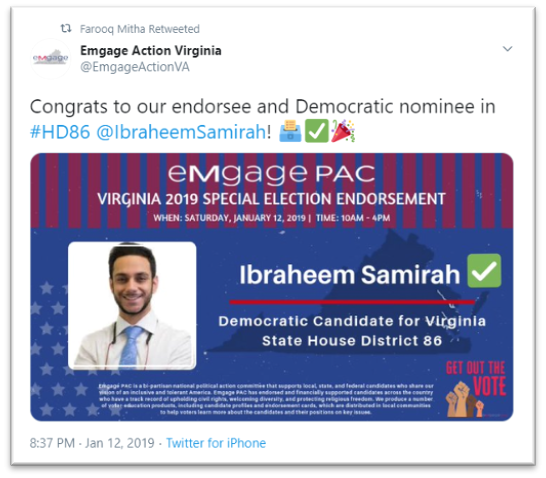 Mitha’s relationship with Khurrum Basir Wahid, which began prior to their creation of Emerge USA (renamed Emgage USA), is also significant due to Islamic Movement and Muslim Brotherhood connections shared by both. According to the Muslim Public Affairs Committee (MPAC, another Muslim Brotherhood front group), Wahid was Chair of the Center for Voter Advocacy, a registered 527 political organization, where Mitha was Treasurer for the Center for Advocacy – FPAC.

Wahid is also a founding Emgage USA member and serves as one of its national co-chairs. He has been a legal advisor for the national office of the Council on American Islamic Relations (CAIR), also named by the U.S. Department of Justice as an unindicted co-conspirator in the HLF case. CAIR is a documented HAMAS off-shoot; in 1997 the U.S. Department of State designated HAMAS a foreign terrorist organization.

Emgage USA is presented by Wahid as a national nonprofit civic engagement organization with chapters across the United States in Florida, Texas, Michigan, Pennsylvania, New York, and Virginia that “works to empower “emerging majority” communities, with a focus on Muslim Americans, to participate more in public and community and public service. Emgage USA accomplishes this thorough the development of young people as our future leadership, development of data to provide solid metrics for future success, and development of an active and engaged voter base.”

Khurrum has played an instrumental role for fourteen years as the chair of Emgage Action and PAC, known for its “political advocacy and action committee designed to support progressive legislation and elected officials who show support for the diverse emerging majority of communities and their issues.”

Emgage USA in fact is a key member of the USCMO, the U.S. Muslim Brotherhood’s political umbrella group and the leading edge of the jihadist movement in North America. The fact that Farooq Mitha is a senior advisor to a U.S. presidential candidate and simultaneously sits on the board of a USCMO member organization, when the USCMO has a close jihadist alliance with the pro-HAMAS regime of Turkish President Recep Tayyip Erdoğan and his Justice and Development Party, ought to be a red flag warning. In forthcoming Part Two of this series, the inner workings of the influence operations of the Islamic Movement, USCMO, and Muslim Brotherhood inside the Democratic Party and Biden campaign will be established.