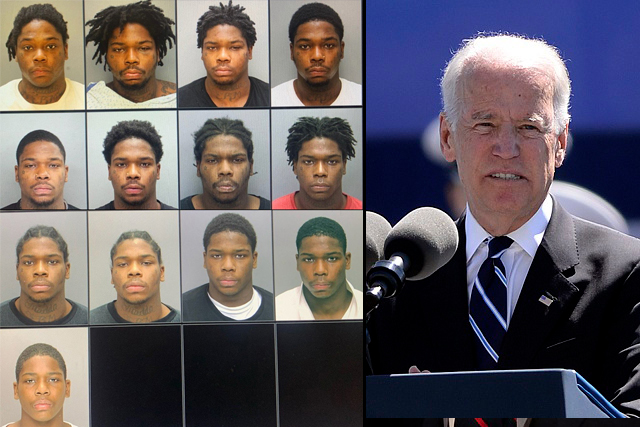 Joe Biden has thrown his support behind violent career criminal Walter Wallace Jr, a serial abuser of women who was shot and killed earlier this week for charging police with a knife in what appears to have been a clear-cut “suicide by cop.”

“Our hearts are broken for the family of Walter Wallace Jr., and for all those suffering the emotional weight of learning about another Black life in America lost,” Biden wrote Tuesday evening on Twitter as thugs were rioting in the streets. “Walter’s life mattered.”

Our hearts are broken for the family of Walter Wallace Jr., and for all those suffering the emotional weight of learning about another Black life in America lost.

Biden’s statement continued: “It makes the shock and grief and violence of yesterday’s shooting that much more painful, especially for a community that has already endured so much trauma. Walter Wallace’s life, like too many others’, was a Black life that mattered — to his mother, to his family, to his community, to all of us.”

As I reported on Tuesday, Wallace was a career criminal with a rap sheet so long no one has been able to find it in its entirety.

Wallace was actively awaiting trial for threatening to kill the mother of his child and shoot her house up in March. “I’ll shoot you and that house up,” Wallace reportedly told her.

Wallace also kicked a woman’s door down and put a gun to her head in a violent armed robbery and threatened to kill his own mother.

In 2019, he was charged with resisting arrest by “kicking the windows and door panels of a police patrol car.”

In 2016, during a robbery, he allegedly grabbed a woman by the neck and held what she believed to be a gun to her head, according to court records.

In 2013, Wallace’s mother had a protective order against him which he allegedly violated when he “threw water in her face and punched her in the face” and “threatened to return and shoot” her, according to court records.

This is who Biden threw his support behind — after the facts of his criminal history had been exposed!

He threw the officers under the bus and acted like they’re evil and racist for taking “another Black life” when the truth is they were simply defending themselves and their local community from a violent career criminal with a knife in a case that was almost certainly a “suicide by cop”!