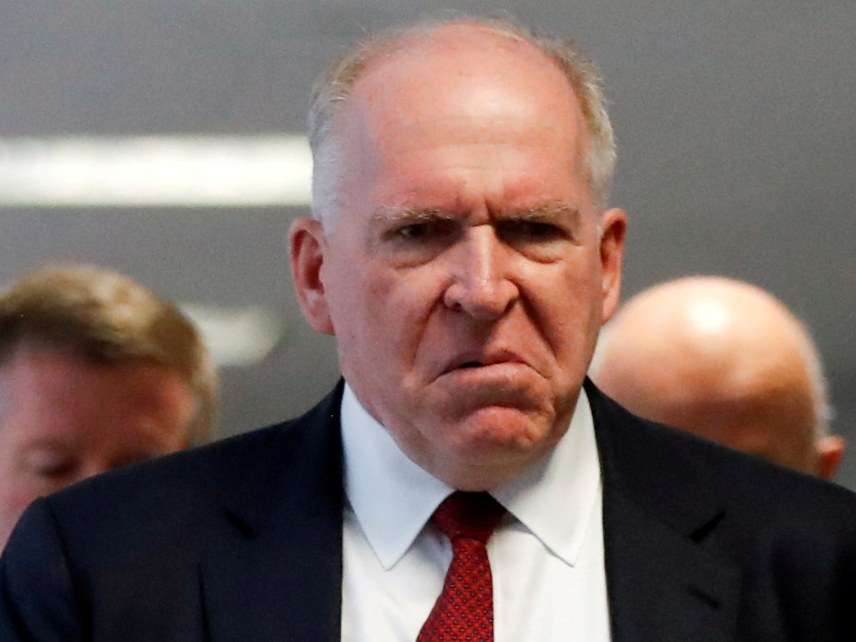 The left is hungry for blood. Let’s make sure it’s their own.

“There will be arrests and indictments without question…This was a coup. It was a conspiracy. It was criminal activity. These people need to be indicted, charged and need to be put in prison, and if they’re not, then our Constitution is nothing more than a sham.”

Why Are Clapper and Brennan Not in Jail?

John Brennan is about to be indicted for plot against Trump, prepare for violence, says fmr CIA officer

A former CIA officer is warning that things in America may be about to get ugly. Very ugly.

In a recent interview with the website USAWatchdog.com, former spook Kevin Shipp warned that if John Brennan and others are indicted for an attempted coup against the president of the United States, the violence from Leftists “is going to increase to the point where it’s going to be very, very bad.”

Americans, he said, need to arm themselves, and be ready to defend themselves, and they need to be aware there are going to be “beatings” and “probably shootings” – including shooting at police.

Shipp was a high-ranking officer stationed at CIA headquarters at Langley, Virginia, and also at Camp Stanley, an Army weapons depot north of San Antonio, Texas, that has a secret CIA facility.

After leaving the CIA, he wrote two books on the agency: “In from the Cold: CIA Secrecy and Operations” and “From the Company of Shadows,” in which he exposes the CIA’s abuse of the State Secrets Privilege to keep things hidden from the American people.

What Trump has been facing, he said, is definitely a coup.

“This is the most shocking violation of the Constitution and criminal activity in the history, not just of America, but of a western government,” said Shipp. “Much of this rises to the level of treason. People need to understand how shocking this is. It was a clear conspiracy.”

“There will be arrests and indictments without question…This was a coup. It was a conspiracy. It was criminal activity. These people need to be indicted, charged and need to be put in prison, and if they’re not, then our Constitution is nothing more than a sham.”

At the National Rifle Association convention in Indianapolis on Friday, Trump urged Americans to exercise their Second Amendment rights. Was he trying to send them a message?

Most Americans don’t realize, said Shipp, that we’re already in a civil war – a war that has been “brewing over 60 years” in this country.

“We have, you want to call it the Dark left. The DNC is fully involved, and all their congressmen and senators,” he said. “There is a Marxist movement within the DNC that is in control right now. If you go back and you matched up the progressive goals with Marxist documents, you’ll see that they are one and the same.”

The Democratic Party, he said, is attacking “the three Cs”: the Constitution, which they want to be understood to be a “living document” that can be changed with the times; Christianity, which underlines the Constitution; and the Culture – the f

They have to do these three things, he said, “to turn this into a global, Marxist government.”

Of former CIA Director John Brennan’s comment last Friday about President Trump’s “sociopathic ramblings,” he said the truth of the matter is clear.

“John Brennan is saying these crazy things because I think he knows he is going to be indicted for this coup against a candidate and then elected president,” said Shipp. “He is the one that took the dossier. He’s the one that disseminated it. He’s the one that leaked it to the press, calling it intelligence, falsifying intelligence. Those are felonies. He’s the one that broke into the Senate on Capitol Hill, into his bosses, the Select Committee, to spy on the torture report. This man has committed several felonies and he knows darn well he has, so he’s coming out screaming and yelling, like a Mockingbird, to the press, trying to cover, before this whole thing comes apart at the seams.”

Brennan and former Director of National Intelligence James Clapper are feeding information to CNN, MSNBC, said Shipp – bizarre statements – because it’s “all they have.”

“They have nothing,” he said. “If they had evidence that none of this was true against them, they’d be coming out with it. But they’re not. Instead, they’re saying, ‘I know you are but what am I?’ and making accusations that are completely baseless.”

“This rises to the level of treason,” he said of Brennan’s and Clapper’s use of their positions to try to take down the president.”

It seems things might be going in that direction.

Joseph DiGenova, former U.S. Attorney for the District of Columbia, said on Laura Ingraham’s Fox News show last week that evidence of a coup is going to be released soon, and that there are going to be indictments and grand juries.

But the Left, says Shipp, is not going to sit back and take it.

“The danger for ‘We the People’ is the Dark Left and Dark Left violence,” he said. “As these indictments begin to come out, and as the players are called out, the violence on what I call the Dark Left, the violence is going to increase to the point where it’s going to be very, very bad. There are going to be beatings and probably shootings, and shooting at police… There is going to be a lot of violence coming from the Left in the next year or two. This is one of the reasons you need to exercise your Second Amendment rights…because of what the Left is going to do with these findings and what is going to be the death knell for the Democrat Party and the death knell for taking over our Constitution and culture. They will exponentially bring up their violence, and Americans need to arm themselves and protect themselves against that.”