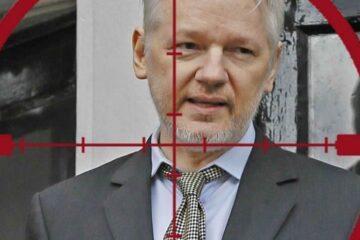 Not much news becomes available concerning Julian Assange, the co-founder of Wikileaks, since his arrest. Yet, that has not kept people from protesting on Assange’s behalf nor speaking out for him at every opportunity. John Shipton, Julian’s father, was interviewed by Lee Camp on RT recently and was very open about a “scandalous” plan by the US government to “murder” his son and destroy Wikileaks.

One of the biggest moments in Julian Assange’s trial is slated to happen next month, when the embattled and imprisoned WikiLeaks founder’s final extradition hearing is held in Great Britain. And as host Lee Camp points out before introducing his guest in this clip from “Redacted Tonight,” there have been some stunning developments recently in Assange’s story—namely, the revelation that the U.S. government and a certain three-letter intelligence agency were ginning up possible plans to assassinate Assange.

If ever there were an expert on Julian Assange, it would surely be Camp’s guest, John Shipton—Assange’s father—who calls the assassination plot considered by former Secretary of State Mike Pompeo and other U.S. officials “pretty scandalous,” if not entirely surprising. Shipton also holds forth on the American government’s big quandary if Assange were to be brought onto U.S. soil to face charges, the man who perjured himself to implicate Assange, and why he thinks his son’s work has been a “great success” despite his plight. Have a look at the clip above to watch the whole interview.

Recent reporting has shed more light on the CIA’s campaign to intimidate, silence, and potentially kill the founder of Wikileaks. Shipton has spent the last decade concerned for the safety of his son and the exposure of the CIA’s plots have fully justified his concerns. The US continues its efforts to extradite Assange to the US despite its losses in court and another revelation that their entire case against him is built on the lies of an admitted fraud. Time has only proved the righteousness of Assange’s work but his torture continues.

Shipton is correct and this has been going on for quite some time. In fact, politicians and talking heads, both on the fictitious “right” and “left” have been calling for Assange to have a bullet put in his head for exposing the corruption in government.

Remember When The US Government & Media Called For Julian Assange To Get A “Bullet In The Brain”?