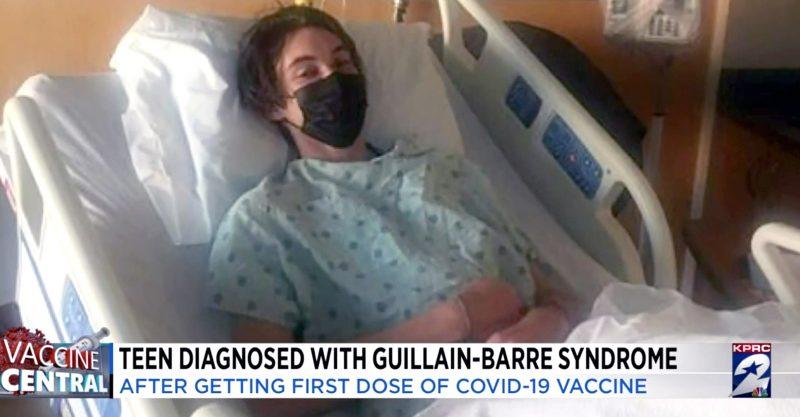 Don’t even try and tell me there is no correlation to any of these diseases, adverse side effects and deaths that result hours to days to weeks after taking this abominable, experimental COVID poison. Now, a previously healthy teenager has been diagnosed with Guillain-Barré, a rare neurological disorder, and while doctors claim it could be a coincidence, the young man believes it is the result of the injection.

A Texas teenager diagnosed with Guillain-Barré syndrome (GBS) a few weeks after his first dose of the COVID-19 vaccine said he believes the vaccine is to blame, according to a local Houston news channel KPRC2 report.

“I wanted to get the vaccine,” said Wyatt McGlaun, a high school senior from The Woodlands. “I felt it was the right thing to do. I wanted to travel and enjoy my last summer before college.”

A few weeks after receiving the vaccine, McGlaun became weak and had difficulty walking. He was admitted to CHI St. Luke’s Health where he was diagnosed with GBS.

. Drone Captures What No One Was Supposed to See” rel=”nofollow noskim sponsored”>
take our poll - story continues below

According to Mayo Clinic, GBS is a rare disorder in which the body’s immune system attacks its nerves. Initial symptoms include weakness and tingling in the extremities which can quickly spread, eventually paralyzing the whole body. Most people with the condition must be hospitalized to receive treatment.

People with GBS usually experience their most significant weakness within two weeks after symptoms begin.

According to the National Institute of Health, one case of GBS was reported in February in an 82-year-old woman who had one dose of Pfizer’s COVID vaccine.

According to data from the Vaccine Adverse Events Reporting System (VAERS), there have been 70 reported cases of GBS after having received a COVID vaccine with 59% occurring with Pfizer, 44% with Moderna and 3% with Johnson & Johnson (J&J).

One case of GBS was reported in a vaccinated participant in the J&J COVID vaccine clinical trial.

The New England Journal of Medicine in April 2020 reported on several cases of people in Northern Italy diagnosed with SARS-CoV-2 who developed GBS. Researchers in Spain and the U.S. have reported cases of GBS in people diagnosed with COVID.

There’s no known cure for GBS, but most people eventually recover. The mortality rate is 4% to 7% and between 60% and 80% of people are able to walk at six months. Patients may experience lingering effects from GBS, such as weakness, numbness or fatigue.

Sims said if these alleged adverse reactions are reported to the U.S. Centers for Disease Control’s (CDC) VAERS they will be investigated. McGlaun’s parents said they plan to report his adverse reaction to the CDC.

Since 1992, the National Vaccine Injury Compensation Program has paid approximately $500 million to 1,450 victims of post-vaccination GBS, The Defender reported.

On March 8, The Defender reached out to the CDC via email and phone with a list of specific questions in an effort to obtain the CDC’s position on trending reports of COVID vaccine injury and death. Specifically, we wanted to know how the CDC conducts its investigations, what the results were of the investigations that were reportedly being done and why autopsies weren’t being performed in cases of reported deaths.

Since then, we have made repeated attempts to follow up by phone and email, without success. On March 25, we called and were told CDC press officers were reviewing our list of questions. An additional deadline was requested, which we provided but the CDC did not meet.

On March 29, we received an email informing us that no one had received our list of questions (which was attached to our previous email and confirmed as having been received by the CDC). We provided the list of questions again and provided a new deadline of April 6. To date, we have received no response.

We will continue to follow up on the many cases the CDC says it’s investigating, including McGlaun’s GBS diagnosis.

This is way beyond criminal at this point. The government is protecting these criminal pharmaceutical companies who are paying them off through campaign donations to be immune from prosecution and lawsuits for the damage they are inflicting on the American people. When are we going to have enough and start bringing justice against corrupt politicians, the mainstream media peddling their poison and the Big Pharma industry? If we don’t bring it to them, rest assured, they will bring their criminal actions to our doorsteps (Amos 6:3).

Tim Brown is an author and Editor at FreedomOutpost.com, SonsOfLibertyMedia.com, GunsInTheNews.com and TheWashingtonStandard.com. He is husband to his “more precious than rubies” wife, father of 10 “mighty arrows”, jack of all trades, Christian and lover of liberty. He resides in the U.S. occupied Great State of South Carolina. . Follow Tim on Twitter. Also check him out on Gab, Minds, MeWe, Spreely, Mumbl It and Steemit
View all posts
(Visited 9 times, 1 visits today)
Share
Tweet
Share
Pin