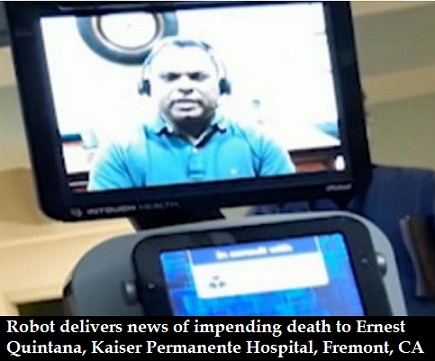 That night in intensive care, granddaughter Annalisia Wilharm, 33, was alone with Quintana when a nurse popped in to say a doctor would be making his rounds.

Instead of a doctor, a robot rolled in and a doctor appeared on the video screen.

Annalisia was shocked by what the on-screen doctor said. Annalisia recounted that her grandfather “cannot breathe, and he’s got this robot trying to talk to him, saying: “So we’ve got your results back, and there’s no lung left. There’s no lung to work with.”

Annalisia said she had to repeat what the on-screen doctor said to her grandfather because he was hard of hearing in his right ear and the robot was unable to get to the other side of the bed.

Quintana’s family had known he would die of his chronic lung disease, but were not expecting to receive news of his imminent death via a robot instead of a doctor delivering the news in person.

The hospital has defended its use of the robot, insisting that the diagnosis came after several physician visits and that it did not replace “previous conversations with the patient and family members”.

Michelle Gaskill-Hames, senior vice president of Kaiser Permanente Greater Southern Alameda County, called the situation highly unusual and said officials “regret falling short” of the patient’s expectations. But the hospital also defended its use of telemedicine and said its policy is to have a nurse or doctor in the room at the time of remote consultations to explain the purpose and function of using the robot.