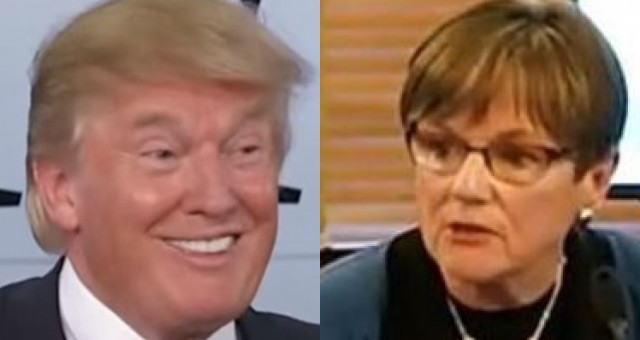 A federal judge who was confirmed by the Senate in 2018 blocked the State of Kansas from limiting in-person attendance of worship services to ten or fewer people.

The Democrat governor of Kansas, Laura Kelly continued to defend her order even after the court decision claiming it was never about religion, only saving lives. (*Abortion clinics are open)

Via the Washington Times:

The ruling from U.S. District Judge John Broomes in Wichita prevents the enforcement of an order issued by Gov. Laura Kelly if pastors and congregations observe social distancing. The judge’s decision will remain in effect until May 2; he has a hearing scheduled Thursday in a lawsuit filed against Kelly by two churches and their pastors.

Kelly continued to defend her order in a statement: “This is not about religion. This is about a public health crisis.”

Broomes’ action comes amid strong criticism of the Democratic governor’s order from the Republican-controlled Legislature and increasing pressure from GOP lawmakers to lift at least part of a stay-at-home order for all 2.9 million Kansas residents that took effect March 30 and is set to continue until May 3.

“Churches and religious activities appear to have been singled out among essential functions for stricter treatment,” Broomes wrote in his order.

The Democratic Governor pushed back against the ruling, suggesting that she intends to appeal the restraining order in a higher court.

Kansas Attorney General Derek Schmidt, however, lauded the ruling, stating that church services were beyond the formal prohibition of state authorities.

“Today’s judicial ruling is a much-needed reminder that the Constitution is not under a stay-home order and the Bill of Rights cannot be quarantined. The Constitution protects our liberties especially during times of crisis when history reveals governments too quick to sacrifice rights of the few to calm fears of the many,” Schmidt said.

The judge is right, and we are certain prohibitions against attending church or other worship services is a violation of the First Amendment protections of religious liberty.

There is literally no difference between going to Walmart or attending a Church service where social distancing and other precautions are observed in terms of health safety.

Democrats are dead set on using the crisis caused by the Wuhan coronavirus to restructure society into their version of a progressive paradise.

They want to ban church services, ban guns, ban protests against their rule, and ban basically anything they dislike.

Democrats also want to commandeer private businesses and other peoples money to achieve their nefarious goals.

Democrats and their media allies are shameless when it comes to pushing their progressive agenda and bashing the president for literally everything he does.

But given what we have seen over the past few years what else can we expect.

*Some additions were made.