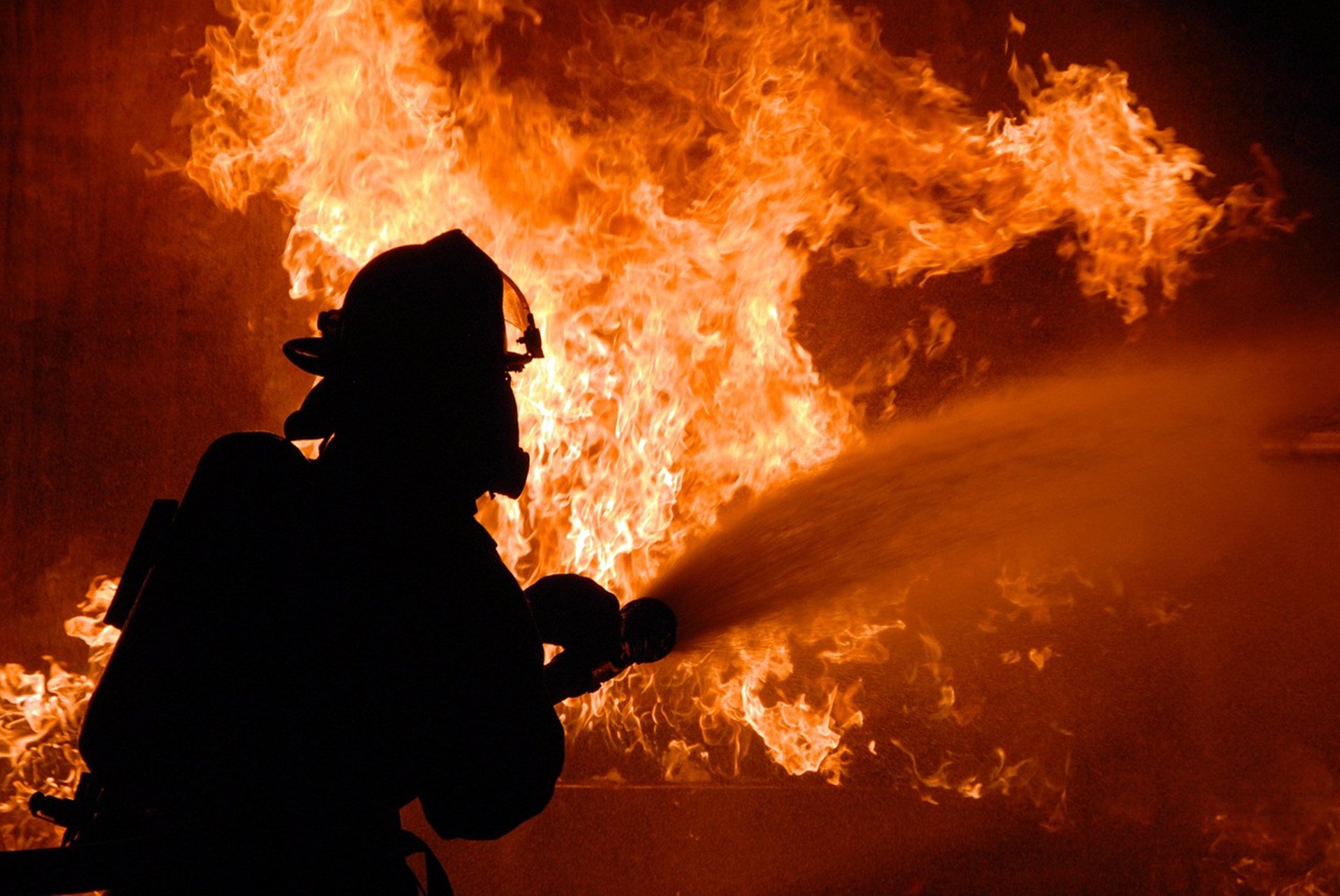 Kanye West is no stranger to public controversy. Arguably, his career has thrived on it. But unlike his previous squabbles, West is currently being attacked not for his typical outlandish commentary but for using private firefighters to help protect his southern California home from the devastating Woosley Fire.

At least 58 people have been killed, and nearly 250,000 people have been forced to evacuate their homes as the wildfire continues to spread across parts of southern California. Public firefighters are surely doing everything they can to contain the flames, but the fire has grown out of control, consuming everything in its path. Unfortunately, the fire has been abetted by the Santa Ana winds, which are prevalent in the area this time of year. As of now, the flames have shown no sign of letting up anytime soon.

Late last week, the fire made its way towards the Hidden Hills residence of West and his wife Kim Kardashian. As it approached their neighborhood, the couple began to grow concerned that firefighters would not be able to make it to their $60-million home before it was devoured by the flames. Naturally worried about the fate of their property, they made use of their homeowner’s insurance policy, which provided the couple with private firefighting services. As a result, the couple not only managed to save their own home but the homes of several of their neighbors, as well.

The Free Market Comes to the Rescue

Due to the location of the Wests’ home, which sits at the end of a cul-de-sac and in front of an open field, had it caught fire it is highly likely that the houses next to it would have followed suit. Instead, the insurance provider AIG’s rapid response to the residence was able to prevent this catastrophe from happening altogether.

The team of private firefighters took preventative measures hosing down the area surrounding the home and creating a fire break around the property. According to one source, the West’s neighbors were filled with gratitude for the couple’s decision to call in a private team of firefighters before the entire neighborhood was consumed. The rest of the public, however, doesn’t seem to share this sentiment.

While this is a classic example of the free market coming to the rescue in an emergency situation, the Wests have come under scrutiny from the public, who have insisted that their use of private firefighters is nothing more than a sickening display of upper-class privilege. Vice went so far as to run an article with the headline “Rich People Pay for Private Firefighters While the Rest of Us Burn,” which essentially condemned the Wests for being rich enough to afford extra layers of protection while those less fortunate lost everything.

West’s decision to make use of the benefits offered to him through his own insurance policy, for which he pays a premium, is by no means some elitist act against the poor. On the contrary, it shows us all that there might be a better way of preventing further devastation from these seasonal southern California fires, one that is centered on market solutions for protecting private property.

Progressives would like to make the private firefighting issue about income inequality and turn the wealthy into the villains, but they’re wrong. For one thing, the utilization of private firefighters has as much to do with the forward thinking of these homeowners wanting to protect their property as it does with their income.

California is no stranger to large brushfires. In fact, earlier this year the exact same situation happened as many were forced to evacuate their homes. Others lost everything as the flames devoured everything in their path. It is precisely for this reason that so many homeowners in the area have chosen homeowners insurance policies that provide private firefighters.

The mountains of southern California are breathtaking, and with just one look you can understand why so many are willing to pay millions of dollars for real estate in this area. But these beautiful views come with their fair share of risks. And since these homeowners have paid so much for their homes, it is no wonder they are willing to pay more to protect them.

Private ownership incentivizes individuals to take extra precautionary measures to ensure the security of their property. And instead of this being a direct threat to public firefighters, as Vice and other would suggest, it offers hope that public firefighters might not have to tackle such an enormous feat on their own in the future. Higher insurance rates also discourage residents and builders from going into high-risk areas in the first place.

In contrast, federal programs like the National Flood Insurance Program take the opposite approach. This program, which was created in 1968 after the devastating Hurricane Betsy, actually incentivizes homeowners to build homes in high-risk areas by essentially subsidizing their insurance coverage. By doing so, homeowners are removed from the consequences of their actions. If and when their homes are destroyed by a natural disaster, they know that the government will swoop in with taxpayer dollars to rebuild their homes in areas where the property is likely to be harmed again once the next hurricane or flood comes.

In Vice’s article, which perpetuates the rhetoric that private firefighters are, by default, elitist, the author writes:

“According to NBC, members of AIG’s Risk Management and Loss Prevention policy group, who qualify for Wildfire Protection Unit services, occupy 42 percent of the Forbes list of the 400 richest Americans.”

While Vice has chosen to make this solely about income, it doesn’t have to be. In fact, every property owner could potentially have access to this type of protection if the government made it easier for more competition to enter the market. AIG and others have to charge so much for private firefighting as a direct result of the government’s burdensome and costly requirements.

According to a 2012 study conducted by market research firm IBISWorld, there are 256 private firefighting companies in the United States — a number that’s expected to grow to more than 320 by 2017. At the same time, the number of firefighters employed by private companies will increase from 16,880 to 27,206.

One can only imagine how much these numbers have increased over the last six years. The site also explains:

There [has] been increased privatization of firefighting efforts by state and local governments as those institutions have struggled with the decline in tax revenue, stressed budgets and caused consolidation of publicly funded fire suppression resources. Between 2009 and 2011, the number of public sector firefighters and first-line supervisors — structural and wildland fire — decreased by 0.6 percent. Over that same period, private sector firefighters and supervisors grew 16.9 percent, according to the Bureau of Labor Statistics.

So while Vice and others want to make this about the rich, it is, in reality, more about the government’s inability to provide adequate protection. But this is not something to mourn. Nor should it be used as an excuse to extort more money from taxpayers who are already paying for this service through our taxes. The state is by no means the end-all-be-all in emergency services.

Kanye West’s use of private firefighters it is a testament to the effectiveness of the market. When the government allows it to exist, whether because of budgetary constraints or otherwise, the private sector is more than capable of entering the firefighting market. In fact, as WildfireX demonstrated, it is already doing so at a rapid pace. And while this is currently a “luxury” afforded to the rich, it is the rich who are the pioneers of innovation, embarking on new frontiers and eventually making these discoveries affordable for the masses. As Ludwig von Mises wrote in Liberalism:

Luxury consumption provides industry with the stimulus to discover and introduce new things. It is one of the dynamic factors of our economy. To it we owe the progressive innovations by which the standard of living of all strata of the population has been gradually raised.

And as more competition enters the market, the more affordable these services will be for consumers and property owners. Not to mention, with more firefighters working to stop brushfires like the Woosley fire, public firefighters will not be overburdened with the task of fighting it on their own.

Kanye West might not always be the bearer of all truth and wisdom, but when it comes to protecting his own property, he gets it right.

Brittany is a writer and editor for the Foundation for Economic Education. Additionally, she is a co-host of Beltway Banthas, a podcast that combines Star Wars and politics. Brittany believes that the most effective way to promote individual liberty and free-market economics is by telling timely stories that highlight timeless principles.